Today alongside the Note20 series smartphones, Samsung is also releasing a pair of new high-end tablets in the form of the new Tab S7 and Tab S7+. It’s been a long time since we’ve seen some good Android tablets as the market is seemingly small and struggling versus the more common-place Appls iPads – but today’s S7 series is really raising the bar in terms of hardware capabilities, bringing some significant updates to the table for what probably are the best Android tablets on the market right now.

Starting off with the SoC, it features the new high-performance binned Snapdragon 865+ SoC from Qualcomm, with Samsung here using the full 3.1GHz peak frequency on the prime CPU core. It’s a nice performance boost and should make the new Tab S7’s the fastest Android tablets on the market right now.

Samsung is configuring both the Tab S7 and Tab S7+ with either 6GB of LPDDR5 with 128GB of storage, or 8GB of RAM with 256GB. There is a microSD slot for expandable storage.

The star of the show today is the Tab S7+ which features a 12.4” OLED display with a 2800 x 1752 resolution as well as a 120Hz refresh rate that’s enables at the full native resolution of the panel. In essence this checkmarks all the possible features a display can have and should be by far the best tablet experience in the market in this regard. 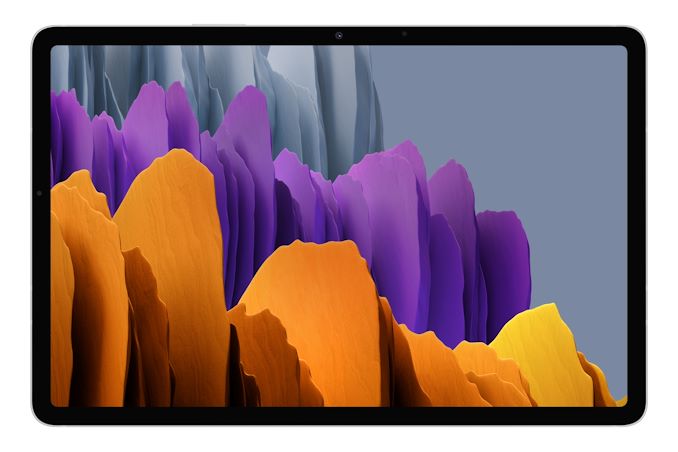 The regular Tab S7 features a similar resolution screen at 2560 x 1600, but at a smaller 11” form-factor and this time around it’s an LCD display. It maintains a 120Hz refresh rate so that will still allow it an extremely smooth content experience. 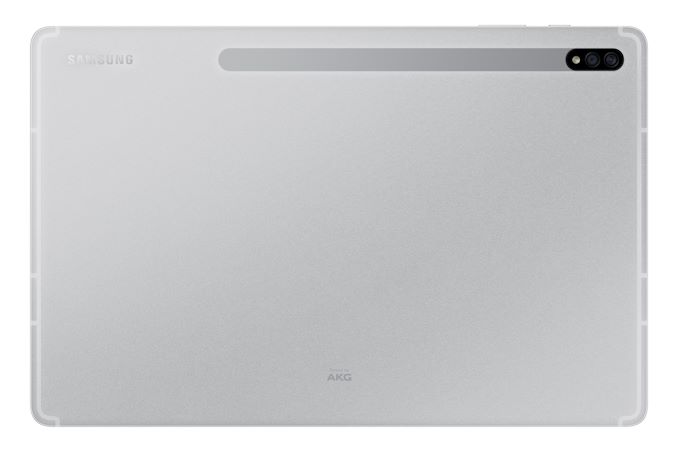 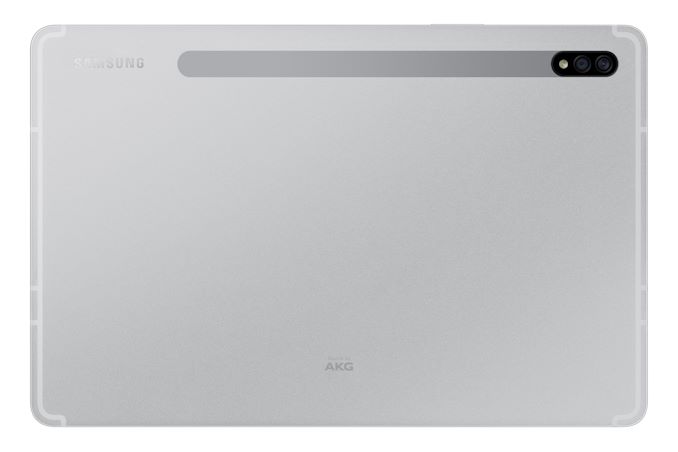 The backs of the new tablets are relatively ordinary, except for a prolonged design element that extends from the cameras. This is the charging surface for the new S-Pen which can be held by the accessory Book Cover or Book Cover Keyboard in this position.

The cameras of the tablets are quite nondescript, with Samsung only revealing 8MP for the front camera, a 13MP main camera, and a 5MP ultra-wide angle. We’re not expecting any great quality out of either of these.

Size-wise, as the Tab S7+ is a bigger device, it also has a bigger footprint and weight, about 12% larger in each dimension and a little heavier at 575g. The S7+ features a 10090mAh battery while the S7 features a 8000mAh unit.

Besides the high-quality displays of the new tablets, the one other design element of the new devices is their thickness which comes in at only 6.3mm for the Tab S7 and a mere 5.7mm for the Tab S7+, making the latter the thinnest tablet of this class ever made.

Alongside the side frames we find four speaker grills which house the quad-speaker setup of the tablets, with audio being tuned by AKG and also supporting Dolby Atmos.

The Tab S7 and S7+ will come in either Wi-Fi, LTE (S7 only) and 5G variants (market dependent). Availability of the different models with different configurations as well as RAM and NAND capacity will be highly dependent on local region. In mainland Europe, the Tab S7 starts at 699€ for the Wi-Fi model, and 799€ for the LTE model. The Tab S7+ starts at 899€ for the Wi-Fi variant, and 1099€ for the 5G variant. An upgrade to the 8+256GB variants costs an extra 79€ on top of that.