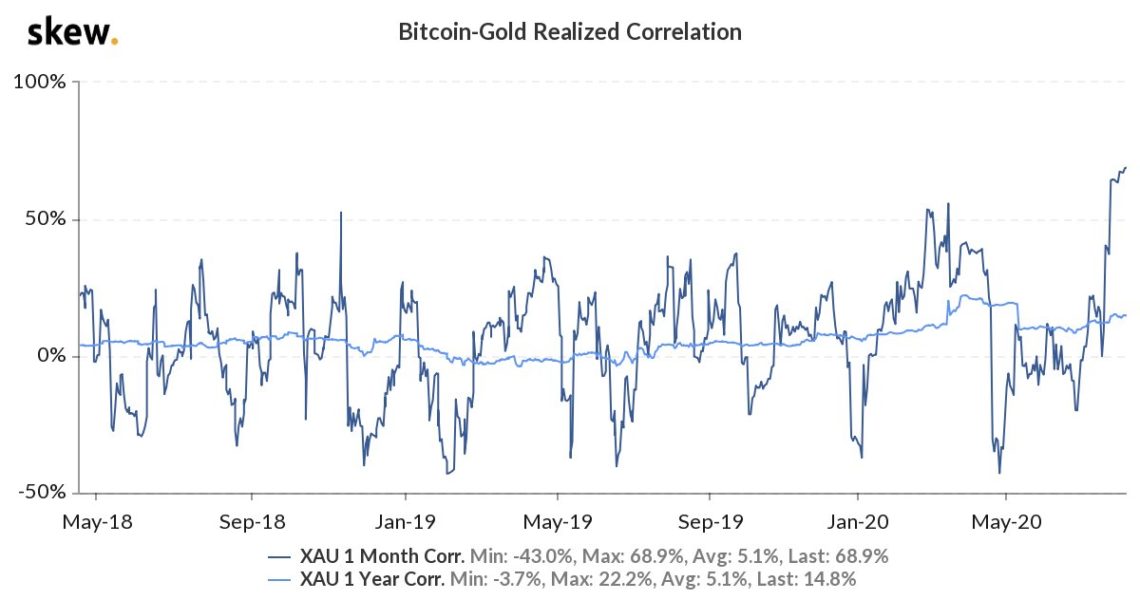 The prices of bitcoin and gold have reached a monthly average correlation of 70%, an all-time-high, according to data analytics firm Skew.

The previous peak of just under 60% was reached earlier on in the second quarter of 2020. Skew said the rising correlation supports the idea that bitcoin (BTC) is a store value, particularly at a time of economic turmoil.

Both bitcoin and gold have risen sharply throughout 2020, driven by relentless fiat money printing by governments and central banks, keen to keep their economies afloat in the wake of the coronavirus pandemic.

BTC hit a yearly high of $12,000 just as gold soared to a record high of $2,000 per ounce. However, both assets dropped significantly on Tuesday after Russia announced it had approved a vaccine for the deadly coronavirus.

As the markets sank, Rich Dad, Poor Dad author Robert Kiyosaki observed that the decline in prices may be a time for “speculators” to sell and for “investors” to buy hard assets.

“Real problem is massive debt and weak economy. Fed must print. I am an investor. Great time to buy more gold, silver and bitcoin,” he told his 1.4 million followers on Twitter.

The damage to world economies caused by Covid-19 is prompting governments to dole trillions of dollars in economic stimulus – and, therefore, causing safe haven assets to appreciate in value, as the dominant US dollar declines. The dollar is down around 3% year-to-date.

In an earlier report, Bloomberg forecast that bitcoin will mature into a gold-like store of value in 2020. It said with its correlation to gold jumping to all-time highs, BTC is poised to transition from a risk-on speculative asset to the crypto market’s version of the metal.

As digital gold, BTC appeals to the cashless internet economy largely on account of its characteristics that include round-the-clock price transparency, and the lack of limits, interruptions or third-party oversight, noted Bloomberg.

What do you think about the bitcoin and gold correlation rate reaching a record high? Let us know in the comments section below.