AMD Releases the A520 Chipset: For Ryzen on a Budget

AMD has officially lifted the lid on its latest entry-level chipset designed for its Zen 2-based Ryzen 3000 and 4000 processors, the A520 chipset. Following AMD’s mid-tier B550 chipset launch a few months back, A520 brings up the bottom of AMD’s now fully-modernized chipset stack, dialing down on things like PCIe speeds to allow its board partners to build more budget-friendly Ryzen 3000/4000 motherboards.

Overall, A520 offers up to twenty-six available PCIe 3.0 lanes available when paired with a Ryzen 3000 processor, with twenty of these coming directly from the CPU. And, wasting no time, numerous vendors, including ASUS, ASRock, GIGABYTE, MSI, and Biostar have already unveiled some of their entry-level A520 boards.

The Zen 2 architecture, which is the foundation of AMD’s latest Ryzen series of processors, has been its most popular series of processors to date. One of the marquee features of the B550 and X570 chipsets is PCIe 4.0, which, although it hasn’t been fully utilized in devices like video cards and storage at present, it is still a popular feature that users hope will future-proof their systems for years to come. The A520 chipset, in turn, drops support for PCIe 4.0 speeds entirely in favor of PCIe 3.0, which is relatively easier to wire for and gives extra scope for the motherboard vendors to save costs compared to B550 and X570. The chipset officially represents AMD’s now current-generation entry-level pathway, and as always, is based around AMD’s AM4 socket.

Overall, the limitation in PCIe speeds for A520 is board-wide. Along with the chipset itself being limited to PCIe 3.0 support for both downstream and upstream, Ryzen processors will cap their on-chip PCIe lanes to PCIe 3.0 speeds when paired with an A520 motherboard. Further cutting PCIe-related costs, with A520 AMD offers less scope for lane allocation compared to B550 and X570, which allows vendors reduce the number of components required. There are only a couple of avenues in which vendors can configure their boards, such as selecting between using two PCIe 3.0 x1 slots or two SATA ports.

The remaining PCIe lanes from the CPU, as always, are divided between a full-length PCIe 3.0 x16 slot, and a PCIe 3.0 x4 link between the CPU and the chipset.

The A520 chipset has identical processor support to that of the mid-range B550 chipset, with official support for AMD’s current Ryzen 3000 desktop processors as well as AMD’s next-generation Ryzen 4000 processors. Like with the B550 chipset, some A520 boards come with video outputs, which all but confirms support for AMD’s Ryzen 4000 APUs – especially seeing as how A520 doesn’t officially support the earlier Ryzen 3000 or 2000 series APUs.

The AMD Ryzen 3000 CPU stack starts at the Ryzen 3 3100 with four cores and eight threads, which is currently available for $99. This would be a very suitable processor to pair with an A520 motherboard, though more aspiring builders can use any of of the Ryzen 3000 desktop CPUs, including the goliath sixteen core Ryzen 9 3950X.

Accompanying AMD’s announcement of the A520 chipset, motherboard vendors have begun rolling out their respective A520 boards. The main form factor of choice for A520 thus far is Micro-ATX, with a couple of Mini-ITX boards including the ASRock A520M ITX/ac and the GIGABYTE A520I AC. Gigabyte also has the only full-sized ATX model announced so far, which is the GIGABYTE A520 Aorus Elite. 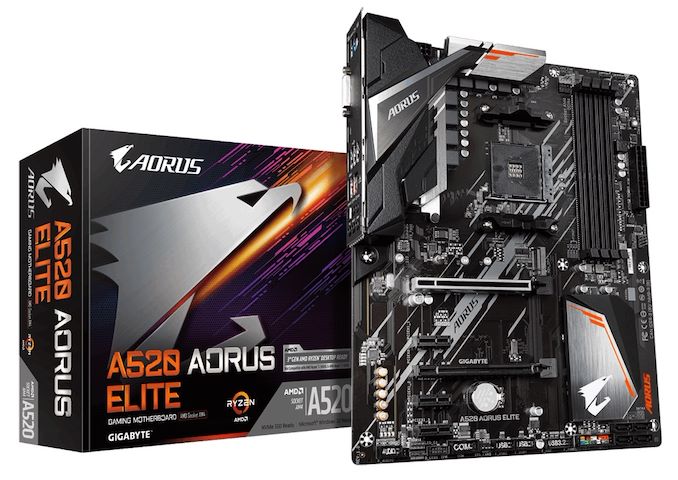 A520 boards set to hit the market include some gaming themed models that primarily come from GIGABYTE with its Aorus models, as well as the ASUS TUF Gaming A520M-Plus. The solitary offering from Biostar is aimed at business and casual users with its A520MH V6.0.

The most feature-packed A520 model looks to be the GIGABYTE A520 Aorus Elite with four memory slots that support up to 128 GB of DDR4-4400 memory, a Realtek ALC1200 HD audio codec and an unspecified Realtek Gigabit Ethernet controller. It has two full-length PCIe 3.0 slots that operate at x16/x2, with three PCIe 3.0 x1 slots and a single PCIe 3.0 x4 M.2 slots with four SATA ports.

At present, we don’t have MSRP pricing from any of the vendors, but we have reached out to each vendor individually, and we will update the above chart once we have the official pricing. It is likely that the vast majority of A520 boards will be below $150 due to B550 models starting at that price point. The A520 chipset is its most basic entry-level chipset for Ryzen 3000 processors.

Finally, today’s A520 release is a hard launch, with Newegg and other retailers already offering boards for sale. Not every board vendor has their wares on shelves just yet – as is usually the case for low-end board launches, this is a very relaxed launch – but over the coming days and weeks we should see the remainder of the A520s trickle into retail shops.