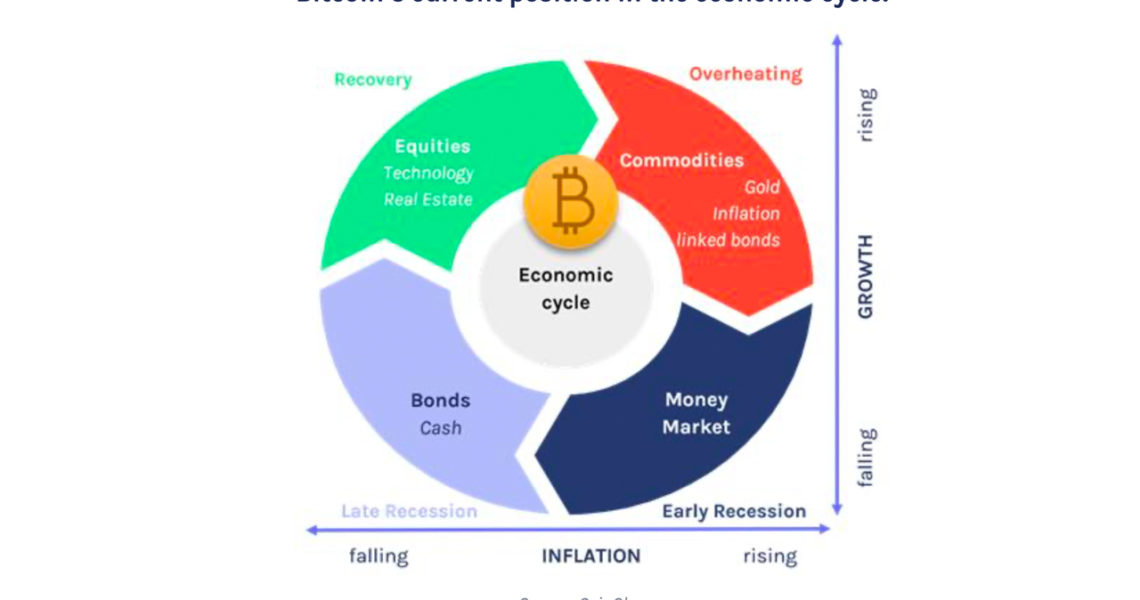 Report: Bitcoin Untied from the Economic Cycle, ‘Largely Uncorrelated to Other Asset Classes’ On Tuesday, Coinshares Investment strategist James Butterfill published a report which shows that bitcoin is a unique asset, but is “largely uncorrelated to other asset classes” like commodities and traditional stocks.

Coinshares Investment strategist James Butterfill published a new report on August 18 that shows bitcoin (BTC) is establishing itself as an investment store of value. Butterfill’s report notes that BTC is “less correlated to the economic cycle” and the crypto asset is uncorrelated to other asset classes in the investment world.

One of the trends highlighted is how investors holding BTC for one year or longer jumped from 30% in 2012 to 60% in 2020. Butterfill writes that Coinshares researchers “believe this trend of investor participation is likely to continue.”

“Since its creation following the financial crash in 2008, Bitcoin has seen meteoric – and volatile – growth,” the Coinshares report called “Bitcoin – In a Class of its Own” states.

“Many attempts have been made at boxing in bitcoin into the pre-existing frameworks of current asset classes, but due to its unique collection of similar yet often non-overlapping attributes, it never quite fits any established mould.”

Bitcoin perception is changing over time, its image as a money-laundering vehicle has subsided, with investors now taking a much keener interest in it. News story counts of potential money laundering were much more prevalent in 2013-14 but have since subsided, while counts of Bitcoin as an investment have become more of a focus. Butterfill details that during the early days (growth phase), BTC behaved much like a tech stock, but going forward researchers at Coinshares think “bitcoin will act more like a store of value (SoV).” However, Butterfill’s report recognizes that in contrast to SoVs like gold and other precious metals, BTC offers other beneficial functions.

The Coinshares Investment strategist pointed to the fact that the crypto asset offers programmable money functionality, the securitization of digital ownership, and traceable recordkeeping with immutability.

On Tuesday morning (Eastern Standard) the price of bitcoin (BTC) touched a high of $12,473 before plummeting to a low of $11,800 temporarily. Crypto traders are still bullish after the recent -5.3% dump and many expected the drop to happen prior to its fall.

Bitcoin has performed much differently than precious metals markets and traditional equities. The Standard & Poor’s 500-stock index (S&P 500) has jumped over 50% since the mid-March market rout, otherwise known as ‘Black Thursday.’ This week the S&P 500 touched its first all-time intraday high in the last six months.

Despite equities and the S&P 500’s recent performance, Coinshares does “not believe bitcoin fits any currently established asset class moulds.”

“Because of its characteristics (scarcity, liquidity, high uptime), evidence suggests investors are increasingly using it as a store of value,” Butterfill’s report concluded. “This has started a self-reinforcing process of financialisation which we believe will lead to increasing use as a store of value.”

What do you think about the assessment from Coinshares Investment strategist? Let us know what you think in the comments section below.

The post Report: Bitcoin Untied from the Economic Cycle, ‘Largely Uncorrelated to Other Asset Classes’ appeared first on Bitcoin News.