For the last few years, Intel has had a product line known as the Visual Computing Accelerator (VCA). With the VCA2 product being put on EOL earlier this year, without a replacement, we wondered where this market of Intel’s was going to go. At Intel’s Architecture Day 2020, it would appear the company is set to product a new SG1 graphics card for the server market for this purpose.

Two versions of the VCA have existed, and the hardware underneath was relatively unorthodox – Intel put three of its Xeon E3 processors onto a single PCB behind a PCIe switch.

Each processor connected to its own DRAM and chipset as well, and the goal was to use the Intel Gen graphics on-board to be able to accelerate streaming video either for consumption or gaming. These processors had the best version of Intel’s Iris Pro P6300/P580 GT4e graphics, along with 128 MB of L4 eDRAM and 32 GB of DRAM each – we saw a company that built VCE cards for Intel’s partners back at Supercomputing 2019.

Each VCA2 was capable of transcoding 44 streams of 1080p30 H.264 simultaneously, or 14 streams of 4K30 H.264. However, the second generation VCA2 was put on the EOL path earlier this year, with no replacement in sight.

Intel declared during Architecture Day that it is planning three products built on its new Xe-LP graphics architecture. The company went into some detail about the form of Xe-LP graphics that will be going into the new Tiger Lake notebook processor, which will be the first version on the market (the full announcement of Tiger Lake is expected to be on September 2nd). 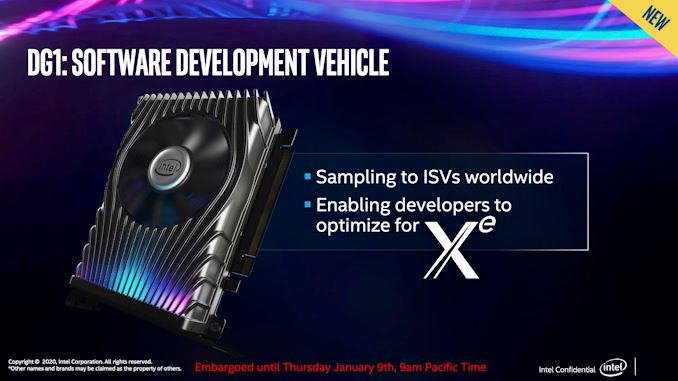 The other product previously announced on Xe-LP was DG1: Desktop/Discrete Graphics 1. This is expected to be the first discrete PCIe add-in card for LP, targeting at the low-end market. Intel has already shown the software development vehicle for DG1 at CES in January 2020, with the announcement that they were starting to sample a version of the card to its software partners in advance of a bigger launch later in the year. The card was the same size of the low-to-mid range graphics on the market today, without a PCIe connector, indicating that it should be under 75W.

The third product is SG1: Server Graphics. Intel gave near zero details as to the setup of SG1, however they did mention that the target market was for video acceleration and streaming, exactly where the VCA series has sat. This would make it align with the mothballing of the current VCA series later this year. The VCA2 card was a GPU that had an 8-pin and a 6-pin power connector and 3x 45W CPUs as well as dual Ethernet outputs, so we fully expect SG1 to be of a similar size.

Intel confirmed to us that SG1 will be a product containing four DG1 silicon dies, put on the same PCB. We expect there to be additional direct external networking connectivity and memory support, and it will be interesting to see how the PCIe lanes are distributed and configuration will be.