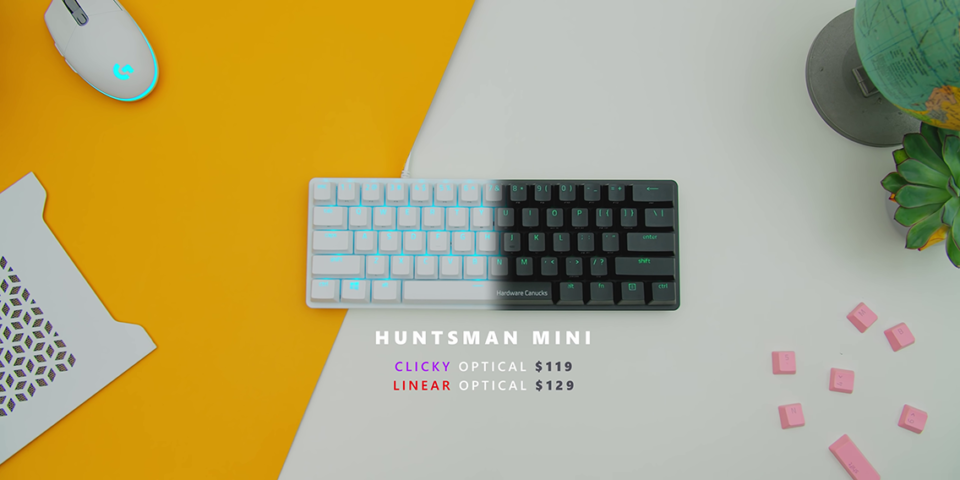 Razer Huntsman Mini (60%) Keyboard Review – They CAN Do Better!

If you are into 60% keyboards, something small and compact, the Razer Huntsman Mini is a solid recommendation. I have had this keyboard for several months, starting off with pre-production samples as part of Razer’s feedback program, and after finally receiving the retail unit I used it extensively for the past three weeks.

Razer’s direction with keyboards is absolutely fantastic, they are on-track to really dominate that space by listening to feedback from the community from gamers and the mainstream. They have done a fantastic job in improving the Red Optical Linear switch, which is now the Gen2 versus the Gen1 that we saw on the Razer Huntsman TE. However, I will say that Razer can do better. The keyboard is fantastic, but it leaves me wanting more.

Now some of the things are mitigated by the custom review samples, like the custom Hardware Canucks space bar, which is not special but is still appreciated. In this long-term review, we are going to talk about everything that is new on these Gen2 Optical Linear switches, and obviously compare how they sound and feel versus the Razer Huntsman TE and some of the other 60% Ducky keyboards. It is in that comparison that things become a little bit challenging for the Huntsman Mini. Basically, the Razer Huntsman Mini is a keyboard with a lot of potential, but it’s not perfect.

First let’s quickly cover all the basics. Price-wise you are looking at two versions, $119 USD for the Clicky Optical and $129 USD for the Linear Optical. The one interesting thing I was discussing with Mike and Eber is with this keyboard where is the Razer tax? It is kind of funny how we have gotten accustomed to Razer delivering competitive prices for their keyboards and their mice. Unlike Razer’s previously expensive price points for pretty much all of their peripherals we kind of perceive the $119 and $129 price points to be a good value, but still it is quite expensive, although in-line with other 60% keyboards.

This model comes with the Razer Clicky Optical switches, the purple ones, and there is also the improved Gen2 Razer Linear Optical switches. I was completely surprised at how fantastic they felt versus the original switches the Huntsman TE. You are paying a $10 premium for the Gen2 linear switches because of lubing, factory lubing is applied on all switches, and they also have silicon dampeners on every single switch. As a result, they feel smoother, quieter, and there is no longer that rattle and nasty noise that we really didn’t appreciate on the Huntsman TE.

Aside from the space saving advantages you get with a 60% keyboard, the new and improved keys are really the main advantage of getting the Huntsman Mini over the Huntsman TE. I really wish that the TE was also updated with the Gen2 switches, because I can tell you 100% the Gen2 feels so much better. The Huntsman TE with the Gen2 switches would be my perfect gaming TKL keyboard. The improvement really comes from the lubing to smooth out on how the switch travels, and also the silicon dampener is not effecting how the switch feels. Normally, if you were to put dampeners on the MX stem you would have that little bottoming out effect that this kind of squishy, but none of that is present here which is awesome. Instead, you have this really satisfying density when you bottom out, equivalent to something like on Leopold keyboards where they put this felt carpet inside the frame. It not only mutes the sound, but it also softens out all the bottoming out strokes. As with the Huntsman TE, the switches are incredibly light, so you have to train not to accidentally depress the keys with just the weight of your fingers. However, for FPS gaming I had nothing but pleasure with the Huntsman Mini.

As for my analysis on the clicky switches, they are not lubed, nor do they have silicon dampeners like the linear switches do, because they don’t really need them here. You still have a bit of a clunky sound profile to them, but they do have very different feel versus other clicky switches from Cherry and Kailh. These feel very similar to Razer greens, with light actuation and kind of a soft clicky point. They are not my favourite clickys, but they are not as loud as others.

As for the rest of the keyboard, the fantastic basics carry over from the Huntsman TE. There is a long colour-coded USB Type-C cable, with a large space opening in the frame itself for custom cables. The keycaps are double-shot PBT, and the texture is slightly more rough than what we get with Ducky. The font is incredibly clean and crisp without the usual artifacts that we usually notice on the really fine characters on standard PBT keycaps. Whatever Razer has done here should be applauded.

I’m actually surprised that the illumination on the Mercury Edition isn’t as bright as I would expect for a white body. There reason is because the LED is below the cab and it doesn’t really help to illuminate the frame underneath, so all the light shines right through the keycap. We have all the standard 60% shortcuts printed on the front of the keycap in a separate color, so you can easily see them. We have the Function key that highlights all the shortcuts, including media control, all your F-keys, lighting customization, macro recordings, and your arrow keys.

Since the layout is also completely standardized, you can swap out the keycaps, which is awesome. Razer actually sells a bunch of their own PBT keycaps, including pink, green, black, and mercury white. The frame is also completely clean and simple, with only the Razer text embedded in the front, which is kind of hidden anyways. There is also a dual-angle step adjustment at the bottom with 6 or 9 degrees of tilt.

Now let’s step back and talk about why I feel like Razer can do better. If we take a look at the competition from Ducky, especially with the Mecha Mini, it seems to offer slightly better value versus the Huntsman Mini. Even though I get it – it’s the first 60% mainstream gaming keyboard – I feel like Razer really could have approached it from a perspective of dominance, and yet they didn’t. The aluminium frame on the Mecha Mini feels fantastic, and in comparison the Huntsman Mini is all plastic and super light. This is an advantage if you travel, and it’s probably a good thing for most, but when it’s on your desk it just doesn’t feel as premium. It would be awesome if the frame was weighted to give you a bit more stability, because even though we have the rubber pads at the bottom, the keyboard does slide around.

The second point of advantage for Ducky would be the additional value-add keycaps, and this is something that would be fantastic for Razer to include, like a Razer green escape key or something for the function key. I get that it might conflict and kind of ruin the whole clean aesthetic of the keyboard, but the value-add element is just not there with the Huntsman Mini. The third point is that while I really appreciate Razer for improving the switch feel, it still has a lot of like wiggle room inside the frame. It not only wiggles the actual switch, but it in turn wiggles the keycap as well. It’s not a substantial takeaway from the build quality, but Razer had time to perfect the switch feel, yet they didn’t fix this thing where the switch kind of wobbles inside the frame. When you are typing you can kind of feel the keys floating around. I even noticed it on my black model when I swapped out the keycaps, because on the bottom row you can clearly see the edge and all the keycaps are slightly misaligned.

When I was swapping out the keycaps on my Mercury Edition, one of the keys actually got stuck. Luckily, this is the only time it’s happened, so I wouldn’t worry about that too much. Now my last point would be about Razer Synapse. I know everyone loves to complain about it, but I think it’s a powerful program that you can do a lot with. You can save four profiles directly onto the keyboard, customize all the keys, create different shortcuts, etc. My complaint here is really about the initial setup, when you plug in new Razer peripherals in your PC all the USB peripherals shutdown during the installation because of whatever Razer Synapse is doing, and then you have to restart. And then I had to do the same thing for the other Mini keyboard, as it recognized it as a separate product… even though they are both Huntsman Minis.

If you are after a 60% keyboard I feel like the Huntsman Mini is a strong contender on the market, and it’s a good way to push the industry forward. Hopefully we will see a 60% offering from Logitech and Corsair, but unlikely because Razer is really the only company who is reach and engage with reviewers, the media, and the community to see what people want. Even though I know this will not sell in large volumes compared to like full-sized keyboards, it is still really awesome to see them try something new. It really is an almost perfect 60% keyboard, but I do have three complaints.

For starters, there are no additional keycaps to customize and add value to an already pretty expensive product. At $129 USD it’s even more expensive than the larger Huntsman TE, even though the reason behind that is the additional lube from the factory and also the silicon dampeners on all the linear switches. Complaint number 2, I feel like the frame is a bit too light for my taste, even though we have an aluminum base plate to really add rigidity to the frame. I just wish it was slightly heavier. And the minor complaint number 3 would be with the initial Razer Synapse installation, when you plug in the Razer peripherals it shuts down all the other USB Peripherals, while this keyboard is installed and linked to Razer Synapse. I wish it wouldn’t do that.

I will be keeping this keyboard in my keyboard arsenal because the Gen2 Linear Optical switches feel fantastic, especially with that dampening of the silicone. It is one of the reasons why I’m still using the XTRFY K4 keyboard, because all the large keys are dampened and silent. If you are after the clicky format and a 60% body, the Huntsman Mini is a solid alternative, especially if you want clicky keys that feel totally different than MX Blues. They don’t have as sharp of a clicky point and they are also much lighter which is a positive for gaming and fine for day-to-day use as well.

Buy the Huntsman Mini & other gaming keyboards from Amazon & other partners below: