Pressure on Nigeria’s current exchange rate is likely to get worse in 2021, when the expected recovery of imports is set to force another devaluation of the local currency to N430/$ next year, according to two Bank of America analysts.

Earlier rate adjustments, one in March and another in July, already appear to have failed to ease the pressure.

In their predictions published in the local media, the two analysts, Rukayat Yusuf and Andrew MacFarlane are estimating “the Naira (NGN) fair value at 451/$, implying 15% overvaluation from current levels.”

The analysts add, “Our baseline is for a 3.5% recession, 13.2% inflation and current account deficit of 3.9% of GDP this year. CBN to remain on hold with a 6% deficit covered by foreign loans and domestic issuance.”

In the meantime, the CBN had revised its Naira/Dollar forecast to 390/$1 by year-end from 430/$1 with foreign reserves at $28bn from $22bn. The bank’s projections were based “on higher oil prices, lower imports” and an expectation that “the $1.5bn in World Bank loans to Nigeria” would be ready in October.

However, the Naira currency continues to lose ground on the parallel where the rates (at the time of going to press) range between 455 and 465, according to Abokifx, an exchange platform that tracks parallel market exchange rates. At some point in August, the rate went over 480 before receding.

The ongoing shortages of hard currency are now forcing financial institutions to impose severe restrictions on the quantities that clients can withdraw for onward payment. For instance, one Nigeria bank, Ecobank is advising one client of the new limits. The notice reads:

Kindly be informed that the monthly POS/Web transaction for Naira debit card usage abroad has been further review downward to $20 monthly. We sincerely regret all inconveniences this might have caused.

Such restrictions are forcing some Nigerian businesses to look for alternatives that are immune to censorship. This is confirmed by several data sources that show Nigeria as one of the leading cryptocurrency markets in the world. Nigerians use cryptocurrencies to make online payments and for international remittances. 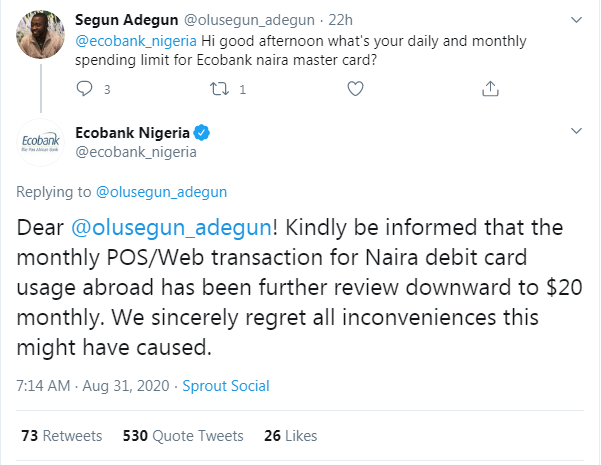 Chiagozie Iwu, the CEO of Naijacrypto, a locally established cryptocurrency exchange platform. He is in agreement that Nigerians are switching to cryptocurrencies in a bid to avoid current restrictions. According to Iwu, “the exchange rate uneasiness has caused banks to restrict foreign currency usage. This, in turn, has made a lot of people switch to crypto for international remittances.”

Iwu adds that fears of another devaluation will eat into savings, and this might have prompted an increased demand for dollar-based stable coins. Nigerian traders also use cryptocurrencies to pay Chinese vendors.

Meanwhile, the CEO shared Naijacrypto’s traded volumes which buttress the notion that exchange rate challenges are driving Nigerians to cryptos.

“In the last two months on naijacrypto.com Naira to stablecoin conversion increased by over 500% in comparison to February when the Naira/USD was stable.”

What do you think of Nigeria’s foreign exchange crisis? Tell us your thoughts in the comments section.