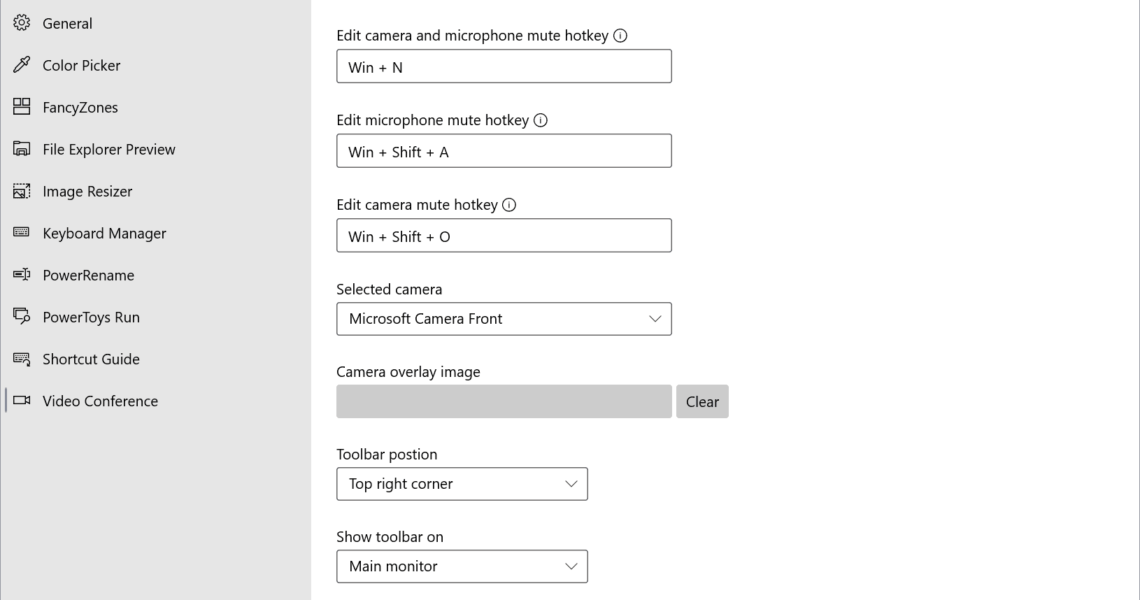 PowerToys: toggle microphone and video camera on or off with global shortcuts

A small but dedicated team is working on improving Microsoft’s open source PowerToys collection of tools. The most recent version, currently available as an experimental release directly from the GitHub repository, introduces global shortcuts to toggle the microphone and/or video camera of the device on or off.

Microsoft notes that the feature was not really intended to be integrated into the tools collection at this time. The global pandemic and the shift to working from home convinced the developers that integrating video conferencing mute options would be a useful addition to PowerToys.

The main idea behind the feature is to allow anyone with PowerToys installed to mute the microphone, disable the video camera feed, or both, with keyboard shortcuts.

Installation of the new PowerToys is straightforward but requires that a virtual driver for the webcam is installed to gain control over the video stream on the device. The audio toggle uses the global microphone mute API.

Both toggles disable and enable the functionality. For video, it was necessary to route the feed through the driver which, when mute is enabled, pushes a black stream to the application instead of the actual video feed. The workaround is necessary to ensure that the real feed can be pushed again without any issues.

The following default shortcuts are available after installation of PowerToys 0.22 (or later):

An option to specify a camera overlay image is present already but it seems inactive in the release.

The release has been marked as experimental because of outstanding issues that Microsoft lists here. One of the main issues that needs to be fixed is that the virtual driver that is used fails to work properly with certain camera or microphone setups.

It is therefore not recommended to install the new version in productive environments, but only on test systems; consider this a beta release.

The introduction of global microphone and video camera mute toggles to disable the devices and their feed with just a shortcut is helpful for a lot of users. While some video conferencing tools may support such functionality, there are others out there that don’t.

Muting is useful in a number of situations, e.g. when receiving a call, when someone enters the room, or when you need to leave the room for a short period.

Now You: do you use video conferencing tools?

PowerToys: toggle microphone and video camera on or off with global shortcuts

The most recent version of Microsoft’s PowerToys open source tools collection introduces global shortcuts to toggle the microphone and/or video camera of the device on or off.