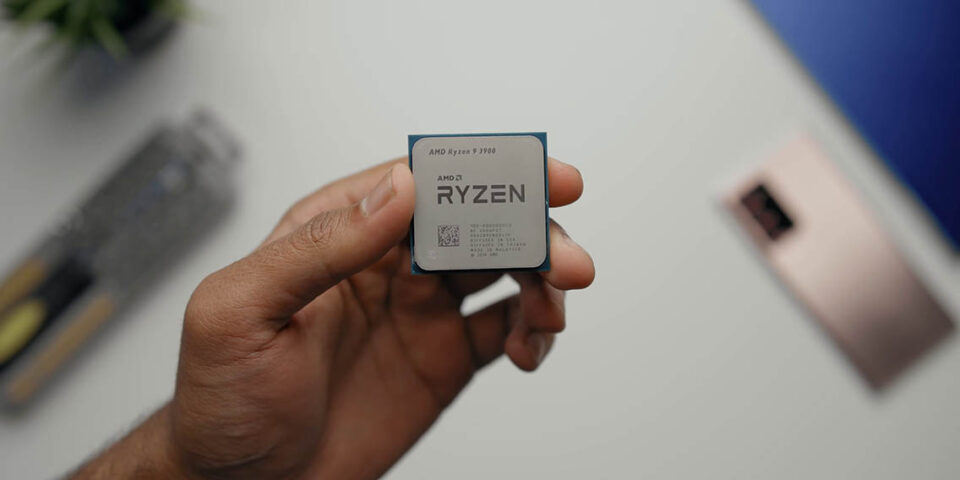 That regular this processor is so uncommon is because AMD only made it available on prebuilt systems, or if you’re lucky enough you can find a 3900 floating around on AliExpress or eBay every now and then. The sample that I have was pulled straight out of the HP Omen 30L, which I did a complete teardown of recently. In fact, if you’re interested in checking that out you can click here. The purpose for this review is that I wanted to find out what the true potential of this processor is when it’s not tied down to a basic HP-designed B450 motherboard.

And you know what? The more we looked at the performance numbers, and especially overclocking, the more I wished AMD would sell it. This is really a wolf in sheep’s clothing, but at the same time I also understand why they don’t want people to get their hands on these CPUs directly from the retail channel.

From a specs perspective, the 3900 is basically a more efficient 65W version of AMD’s Ryzen 9 3900X. In order to get that lower TDP rating AMD reduced the clock speeds and voltage making it identical to the Ryzen 9 Pro 3900. It still has 12 cores/24 threads, and the same amount of cache as its bigger brother. But why even create this thing and not sell it to people like you and I? Well basically AMD launched processor so that system builders have a higher-end but power efficient 24-thread processor that they can sell at a premium. If you look at it this CPU consumes less power, which means they don’t have to spend more money on more expensive components to support a 105W 3900X.

I will give you a perfect example, if you look at the HP Omen 30L there is just no way that the cooling solution and the motherboard can support a higher watt TDP for an extended period of time. If they had put a higher spec processor in there, it would have been necessary to add a better motherboard with expanded power delivery and more PCB layers along with a less generic CPU heatsink. Then again, if you look at the Intel systems that HP Omen is offering, they are working with better Z490 motherboards and liquid cooling options. Why they don’t offer those better components on AMD systems is a conversation for another day.

For most people, the thought of sacrificing performance for better efficiency isn’t really appealing. For the small form factor (SFF) crowd though, well this kind of CPU would be absolutely perfect in my opinion. I mean, sure, it’s simply a de-tuned Ryzen 3900X and you can get very similar results by simply undervolting that processor. However, this is a simple drop-in solution that has supposedly been binned for its ability to run at maximum efficiency, while delivering consistent frequencies.

Now don’t think for a second that AMD is using cores that wouldn’t make the cut for a full 3900X’s higher clock speeds, and that’s because at least the sample that we are over here can overclock like crazy. It was just incredible that with a bit of coaxing – 1.35V set in the BIOS plus Load-Line Calibration (LLC) – it didn’t have any problem hitting a stable 4.4GHz on all cores, while being cooled by a Noctua NH-U12S. Going above that seemed to cause an immediate black screen, so it’s likely we had hit the maximum allowable input power. As you will see later, those speeds delivered some incredible benchmark results.

Looking at power consumption, it’s really amazing to see what AMD has done with this processor. It needs almost 100W less than the Intel Core i9-10900K, but it has two dozen threads. Another thing I want to mention here is even though the 3900 is rated at 65W, it’s actual power draw is close to 90W. Under heavy multi-core load we saw package power readings around 88W, which is still super efficient, but a lot higher than what is being claimed.

Speaking of benchmarks, as always we ran our full suite of tests on this processor and it was a lot of fun. We had a lot of fun reviewing the results and comparing it to the rest of our CPU lineup. Now based on paper specs alone you would think that the 3900 would get kicked in the teeth by a 3900X, but that isn’t really the case even though it’s frequencies are between 300MHz and 700MHz lower. In most cases, it loses by at the most 12%, and in many cases the gap is even smaller. There is a reason for that too, even though AMD rates the Ryzen 9 3900 at much lower boosts and base frequencies those are just theoreticals. In real world speeds – in both lightly and heavy multi-threaded workloads – they are actually a lot closer to the 3900X. I have to say this processor is probably the best example of what AMD can do with its current generation architecture. It combines low power consumption with some really impressive benchmark results, but it also shows how much additional power they needed to get the relatively minor performance increase we are seeing with the 3900X and the 3900XT.

As for gaming results, this is one area that I was a bit concerned about. It started off really poorly for the 3900 since Call of Duty seems to like higher clock over core counts, but moving on to other games the GPU itself becomes more of a bottleneck. This processor’s frame rates are not 100% aligned with the others, but there is just no way someone staring at the screen would notice a difference here. Even the 1% lows were super similar going from one CPU to the next, with only the i9-10900K offering anything close to a different experience, and even then it wasn’t all that much better.

What about those overclocking results I promised you at the beginning? Well here they are as promised. As you would ecpect, the Ryzen 9 3900 chugging along at a constant 4.4GHz is going to be a dominant beast in pretty much every application, especially the ones that rely on multi-core workloads. On the either hand, if there is a program like Adobe Premiere that relies more heavily on the GPU, increasing CPU frequencies has a pretty minor effect. In gaming though, well let’s just say that the 3900 goes from an okay gaming CPU to one of the best around. That is mostly because running at a constant 4.4GHz adds a bit more than 1GHz to the in-game frequencies I saw during stock speed runs.

So that pretty much wraps up this quick review of a very rare little CPU. Overall, I think that the Ryzen 9 3900 is one of the best processors AMD that has launched in this generation. It’s efficient, it runs cool, and it overclocks really, really well. Also, if you look at these stock clock speeds, you are actually not losing all that much in terms of performance compared to the Ryzen 9 3900X. This is basically the pinnacle of Zen 2, and it just really goes to show what the architecture can do: And it’s amazing.

It’s just too bad that they are only available for OEMs and other system integrators, but I also understand some of the questions that AMD would go through if they made this widely available. I mean would they market this from an efficiency standpoint and sell it for more compared to the 3900X or would they sell it for less targeting lower performance? Those are certainly some things to consider. Honestly, in the retail market, I think this would be a niche CPU without a real home. It would appeal to some small form factor enthusiasts or someone who wants lower power consumption without sacrificing core count. I know one thing for sure, I would totally rock this thing and it’s definitely not going back to that HP Omen 30L. In fact, it’s going onto a very special build coming very soon, so keep an eye out for that.