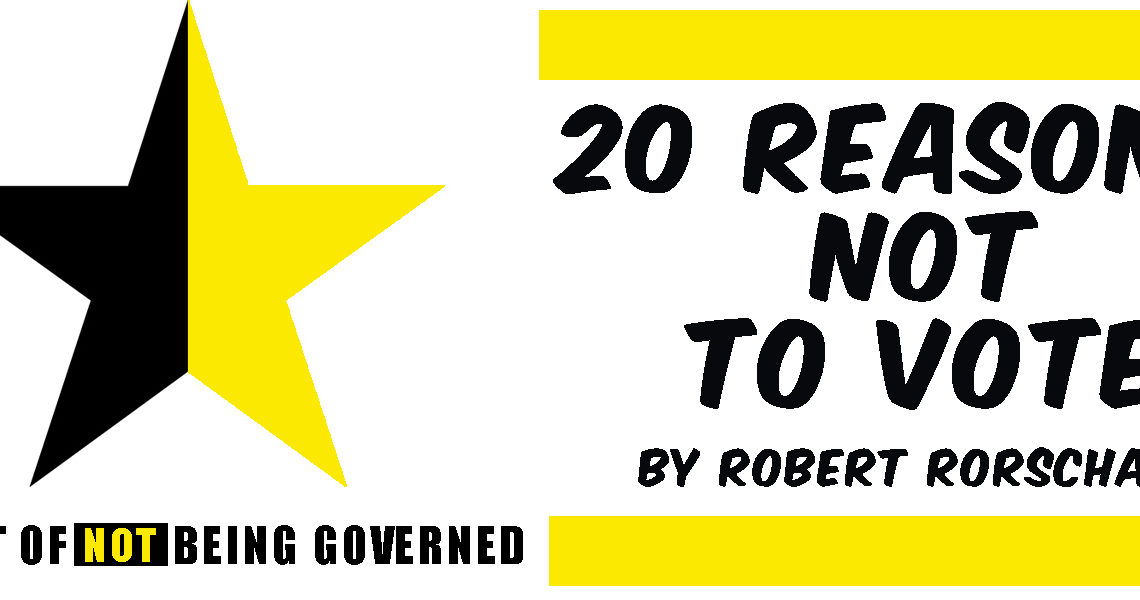 Robert Rorschach: 20 Reasons Not to Vote If one votes, one participates. If one participates, one condones and endorses the process, and subsequently, what those elected ‘representatives’ do and say in your name.

Reason 2. Electoral promises are meaningless because politicians are able to lie to gain the favor of the electorate, and then do exactly what they want once they have it. Then there is no accountability or recourse, other than waiting another four years or so to vote them out and replace them with someone else who will follow the established template and do the exact same thing.

3. The act of voting grants legitimacy to the idea that it’s acceptable for the majority/collective to use the coercive arm of the state to impose their will on the minority/individual using force, or threat of force, and for that reason, it is immoral to vote. As such, the only way to truly de-legitimize the system is by not voting. When the people refuse to participate in droves the international community can no longer recognize the results of the election as legitimate. This perceived legitimacy is such a concern for politicians that in some countries it’s now a legal requirement to vote (e.g., Australia).

4. A non-voter emerges from the electoral process with a clean conscience because they can legitimately proclaim that what the elected ‘representatives’ subsequently say and do after they have gained power is not done in their name, not with their permission, and not with their encouragement.

5. To not vote DOES NOT mean one relinquishes the right to then comment on, complain about, or protest the actions of the government, it is completely the other way round. When one votes one effectively makes a contractual agreement (the voter is officially recorded doing so), which hands over the right for someone else to speak and act in their name, and as such, assents to whatever the government does thereafter. A non-voter however, has not done so, and therefore retains the right to complain, object and protest all they want.

6. Participation in the system (i.e., voting) reinforces the idea that people can’t live together without violent control.

7. Participation in the system (i.e., voting) implies that the majority knows what’s best for everyone.

8. Participation in the system (i.e., voting) implies that the majority knows what’s best for the individual.

9. Voting is effectively participating in mob rule, and the mob then enforces it’s views on the rest of society with the threat of violence.

10. By voting, an individual literally advocates the use of force against peaceful people.

11. Voting reinforces the idea the ‘people’ have the power rather than the largely unaccountable bureaucrats who make the rules.

12. Voting is futile because invariably the better-financed candidate wins.

13. Statistically, any one vote makes no more difference than a single grain of sand on a beach. Thinking that their vote counts tends to give the voter a mistakenly inflated sense of self-worth, and participation in a system creates a passive sense of accomplishment.

14. An individual’s ability to make an informed choice is zero if the only information they reference is from the overtly bias mainstream media, government news channels (propaganda), politicians and party manifestos (sales pitch), or from an ‘enforced’ state school education (indoctrination).

15. Voting sends a false signal to the elected politicians that the voter approves of all their policies. Voters, therefore, encourage them.

16. If an individual has not come to a firm conclusion about the election, that individual will do more for their country/community by not voting, rather than making a mistake.

18. No individual has the authority to make laws their neighbor, or anyone else, must obey. Then how is it morally acceptable for any individual to delegate authority they don’t have to someone else, such as a politician?

19. Should people who know more about game shows, sports, reality TV, and celebrities, rather than matters of any real importance (economics, political philosophy, history, logic, critical thinking, etc) be in a position to vote and influence the lives of others?

20. Supporting the lesser of two evils is still supporting evil.

The 20 reasons not to vote boil down to this:

If you are not a Voluntaryist, then by definition you are an Involuntaryist, and as such, personally advocate the initiation of force, or threat of force against people who haven’t threatened or harmed anyone. Therefore, for every person in the world one of these statements is true:

1) “I advocate a society whereby people are free to voluntarily interact with one another.”
2) “I advocate the use of force, or threat of force, against innocent people, in order to make them comply with my opinions and preferences.”

If the first statement refers to you, then DON’T VOTE.

If you are interested in learning about the many methods of voluntaryism, crypto anarchy, and the myriad of ways to opt-out and vacate the state – Check out these essays below.

What do you think about the 20 reasons not to vote for the political class? Let us know what you think in the comments section below.

The post Robert Rorschach: 20 Reasons Not to Vote appeared first on Bitcoin News.