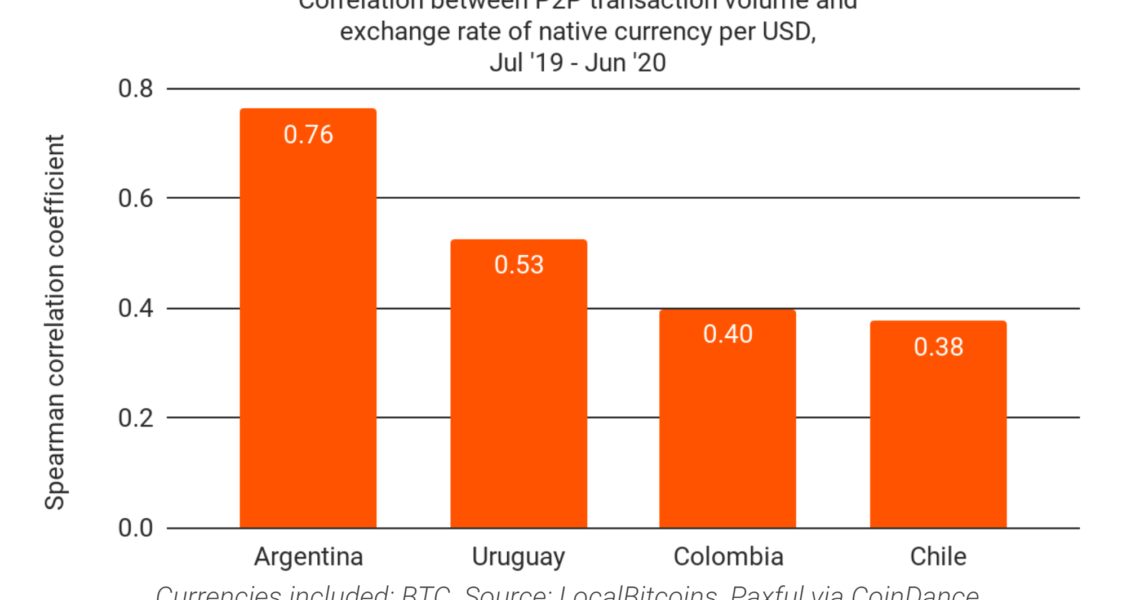 Latin Americans have embraced cryptocurrency as a store of value while their fiat currencies depreciate, a new report shows. Bitcoin adoption in the region is further driven by the lack of banking access and remittance needs.

Sebastian Villanueva, who manages the Chile operations of crypto exchange Satoshitango, explained that the lack of banking access for individuals and businesses is a major drive for cryptocurrency adoption in Latin America. “Lots of people here have uneven income because they do gig work for Uber or places like that, which makes it hard for them to get a bank account,” he said, asserting:

Without easy banking access, many young people in Latin America turn to cryptocurrency as a means of storing value.

Many Latin Americans use stablecoins like DAI and USDC to lock in their savings, Villanueva noted. Chainalysis explained that a significant share of the stablecoin transfer volume in the region is from traders using fiat to buy bitcoin or stablecoins, like tether, from local exchanges or P2P exchanges, and then use those funds to trade on larger exchanges like Binance that provides more trading pairs and greater liquidity. “This is a common pattern not just in Latin America, but in other developing regions as well,” the firm noted.

The correlations, each of which is statistically significant, suggest that cryptocurrency users in Argentina, Uruguay, Colombia, and Chile in particular are turning to cryptocurrency as a means to store value when their native fiat currencies are losing value.

“Venezuela and Argentina especially are printing money like crazy, so their fiat currencies are losing value. That drives a lot of cryptocurrency adoption,” Villanueva continued. “Some countries, like Argentina, limit the amount of U.S. dollars citizens can buy per month, which further limits their options for secure savings and increases the need for cryptocurrency.”

Last October in Chile, there were mass protests over education, healthcare, and overall economic conditions. Fiat pay platforms saw huge decreases in activity during that time, but we grew by about 35% … People just want a safe way to store money, and there are no gatekeepers in crypto. Latin America also has a robust crypto trading scene, with Brazil in the lead in terms of the most cryptocurrency usage by on-chain volume. Venezuela is a distant second, but the country accounts for the third-highest number of transfers on Localbitcoins and Paxful, two of the most popular worldwide P2P exchanges, as news.Bitcoin.com recently reported.

The region has the second-highest share of retail crypto activity, defined as transfers of less than $10,000 worth of cryptocurrency. However, professional traders still account for roughly 80% of all volume transferred in a given month; they prefer using large international exchanges like Binance rather than local exchanges to access more trading pairs and greater liquidity. Overall, Latin American countries sent $25 billion worth of cryptocurrency and received $24 billion worth in the past year, representing between 5% and 9% of all cryptocurrency activity in any given month, Chainalysis detailed.

Representatives from Brazil-headquartered crypto hedge fund Hashdex told Chainalysis that “a desire for potential high yield assets with uncorrelated returns is driving cryptocurrency adoption amongst professional investors, such as those representing pension funds and family offices.”

What do you think about bitcoin adoption in Latin America? Let us know in the comments section below.