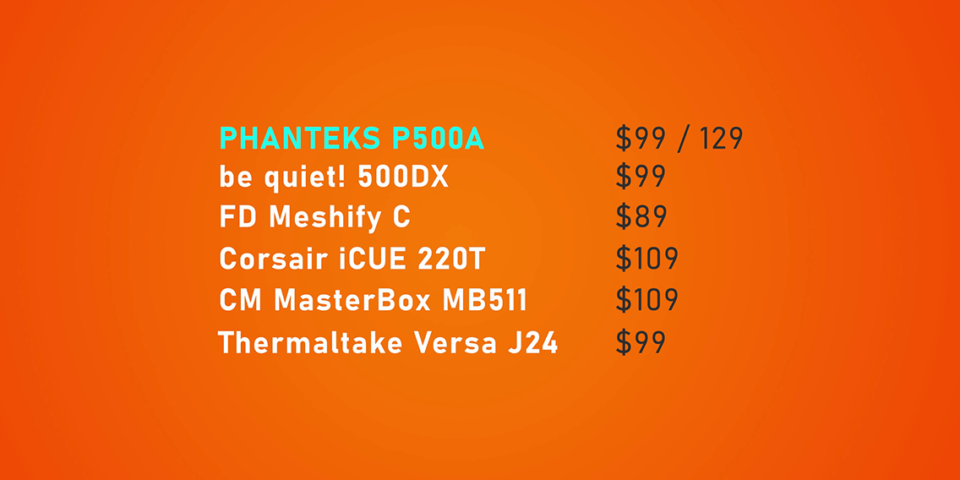 It is finally here! The Eclipse P500A from Phanteks has arrived. I was excited to see it at CES, and I’m just as excited to finally have it in the studio to run my airflow testing, and really put it in perspective in terms of the full Eclipse lineup and the entire mesh case competition.

This case is important right now because it brings you the guts of the much more expensive Evolv X or the P600S, but with a similar airflow direction like the P400A and the P300A. The perforated metal front intake acts as both a dust filter and a really good metal mesh for airflow. In this review I will be comparing it to the P400A and the P600S to see what the air flow difference is like, but in short this is going to be a really popular enclosure and a chart-topper.

First of all, price wise you are looking at $99 USD for the standard P500A – which includes two 140mm fans – and then there is the $129 USD model, which is the P500A D-RGB. That acronym stands for digital RGB, and that model includes three 140mm digital RGB non-PWM fans, which are beautiful. The D-RGB model also has the power LED strip that seperates the main area from the power supply chamber. It is absolutely gorgeous and has beautiful uniformity. This model also has a D-RGB power LED on the front fascia above the fans.

In the $99 space of airflow focus cases, the P500A is holding good ground versus the be quiet! Pure Base 500DX, the mesh MasterBox, the Corsair, and the Thermaltake alternatives. However, once you enter into the the $129 territory there is a lot of variety and competition from Phanteks, Lian Li, NZXT, and Cooler Master.

The P500A and the P500A D-RGB share all the same build quality and features – aside from the fan configuration and the lighting – and the build quality for a $99 USD enclosure is pretty good. On my sample the feet are not exactly aligned, so there is a bit of wobble even with a fully assembled system. If you do decide to go with the RGB model, the light shine through the mesh is very interesting, because straight on you can see all that illumination appear but on an angle it does hide some of it which looks pretty cool. We have plenty of beautiful effects built-in that you can cycle with the button up top, changing modes and color presets.

The I/O up top comes with dual USB 3.0 ports and a USB Type-C Gen2 port. It has a pretty long cable, just make sure to remove it from the velcro channels at the back and this will give you reach to every corner on the motherboard. Now initially I was worried about this spacing between the two USB 3.0 ports, but I actually prefer this method over other cases like with my Corsair 680X. On that case if I plug in something wide it blocks the other USB ports, whereas here you can connect something wide and slightly thicker without interfering with the other ports.

Now really to star of the show with A series of Eclipse cases is that high performance air flow mesh. It acts as a dust filter and allows for air to get through because of the high density 1mm cutouts. The density on the front mesh is actually slightly better versus the top dust filter, and speaking of dust filtration there is a power supply dust filter at the back removal from the rear. This case has a removable swivel TG panel, while the other side panel is pretty basic. It is all metal without any material on the interior aside from a small rubber pad to prevent vibrations. The one that improvement when they have done with the P500A is added a little stamp into the panel to add additional rigidity. There is no flexing and the panel is really sturdy, which is good because the P400A had the bit of flex with a simple finger poke. Design-wise this case follows in the footsteps of the P600S’ front panel design, which makes sense given that they share the same interior.

As far as accessories, we do get the usual plastic toolbox, which I love. We have six cable ties, which I actually haven’t used because of the built-in velcro straps all over the back. We have two hard drive caddies that can stack on top of each other, or be a laid out individually. They fit in the back with three positions available, with 195mm at your closest distance to the power supply so you can still mount 160mm and 170mm power supplies with those drive caddies near the power supply area. When they are closest to the front they do not interfere with that open gap in the power supply shroud, so you still have 70mm of clearance for radiators and fans.

Regarding storage we also have three SSD caddies behind the motherboards, they are tool-less and easily accessible. We also have a plastic vertical GPU mounting plate that you can mount in two positions, because we have the three vertical PCI slots. However, the riser cable is not included, so you have to purchase that separately, but the option is still there. One of my favorite accessories is the anti-GPU sag bracket that you mount the back. It actually works, it really does correct the GPU from sagging just tiny bit and it strengthens everything out.

Now the interior is almost identical to the Evolv X and the P600S. The only difference would be the top fan bracket is no longer removable as it is actually part of the frame structure, and so the case is actually slightly shorter versus the P600S. However, you can still mount that optional ITX motherboard bracket at the top to go for a dual system configuration. For a $99/$129 USD to have that capability is a pretty damn good deal.

As for cooling potential, this thing can support triple 120mm fans at the front and the top, with triple 140mm fans at the front as well, which is what this case comes with. Radiators up to 420mm are supported at the front and up to 360mm up top. For a $99 frame I feel like Phanteks really zeroed in to make sure not to include too many of those premium features found on the Evolv X and the P600S, but also not step on the toes of the slightly cheaper P400A. The P500A is kind of in its own class and in a really good price segment to not compete with the higher end or the slightly lower stuff.

My only complaint about the interior – as was with the P600S and the Evolv X – is that I don’t particularly like these sliding covers beside the motherboards. I feel like they don’t hide cables very well, I much prefer rubber grommets, and they will always be misaligned unless you pull back some of the ones that are not actually being used.

As for the rest, it’s pretty awesome. We have a little door underneath the GPU on the power supply shroud, so you can route your PCIe cables cleanly. We have an opening in the back to reveal your power supply and plenty of open spaces right underneath the motherboard to pass all your little cables. I really like their approach to cable management at the back as well, just like with a P600S and the Evolv X, dual channels and all velcro straps so you can pass your thick cables on one side and all your little fan cables on the other channel. It’s also very easy to unhook your velcro strap, play around with your cables, make sure everything is clean and then hook it back in without actually requiring any effort at all.

And now let’s talk about the airflow performance: It’s fantastic, but with a catch. At stock configuration those three 140mm fans are doing a fantastic job at cooling both the CPU and GPU. However, check out what happens when I remove the front mesh just to see how much restriction that’s causing, and it’s actually not that much at all. Only a two degree difference on the CPU, while the GPU remains the same. I then added the same fan at the back for a total of four inside the case, and my GPU and CPU temperatures basically stayed the same. The GPU only dropped a single degree, which means the cooling potential out of the box is fantastic. Next I wanted to move one of the front fans to the rear for a total of three fans, just so we can play around and see if we can cool the GPU slightly because exhausting air does help with the GPU. That made no difference, we still have 74°C and 72°C on the CPU and GPU.

How does it compare to other airflow focused enclosures? Plotting the P500A D-RGB in my charts, it does perform better than the Pure Base 500DX from be quiet! versus Phanteks own P400A. Although that model has triple 120mm fans of the front, which makes sense as to why it does perform slightly worse. It is also kind of funny to see a 10°C difference between the P500A D-RGB and Define 7 Compact.

You may be wondering why the P600S with triple 140mm fans in the front is actually slightly cooler versus the P500A D-RGB? The reason here is I installed the same type of fan in my P600S, but these fans have a variance of 10% which means they are rated at 1,500 RPM, but in my system they were actually spinning around 1,300 RPM. When I installed the other pack inside the P600S they were spinning at full speed at 1,500 RPM, therefore giving additional airflow.

And now to come back to my comment about the catch. The catch here is these fans at full speed are loud, and if you compare the full speed noise levels of this machine versus the 500 DX – which is only a few degrees hotter – the be quiet! machine lives up to its name by having good quality fans that are much quieter. The P500A is all about moving as much air as possible, but it is significantly louder. Of course, you can lower the fan speed like I have done for a completely silent machine and then ramp up of the fans only when needed.

My concluding thoughts on this enclosure is that at $99 USD I think it’s competitive in terms of availability of features, like you can mount an ITX motherboard up top for dual system configuration, the vertical GPU mount, and it looks beautiful. For the $129 USD model, you have additional bling with the digital RGB, plus awesome fans that deliver fantastic airflow, but are pretty loud. The competition at $99 that delivers the next best cooling would be the be quiet! Pure Base 500DX that has three 140mm fans and is a much quieter machine. It is also a little bit more compact so all the components don’t look so lonely inside. The advantage here is more internal space for water cooling if you are going that route, but in terms of comparative cooling advantage versus cases like the be quiet! Pure Base 500DX and Phanteks own P400A, this case is slightly cooler but also more expensive.

While having competition from Lian Li with the LANCool II Mesh will definitely spice things up, if you’re looking for an airflow targeted and not super expensive case right now the P500A is a definitely solid choice. Let me know what you think of the P500A D-RGB model, do you think the $30 premium is too much for an additional fan and that RGB strip? It’s beautiful but the thing is quite loud.