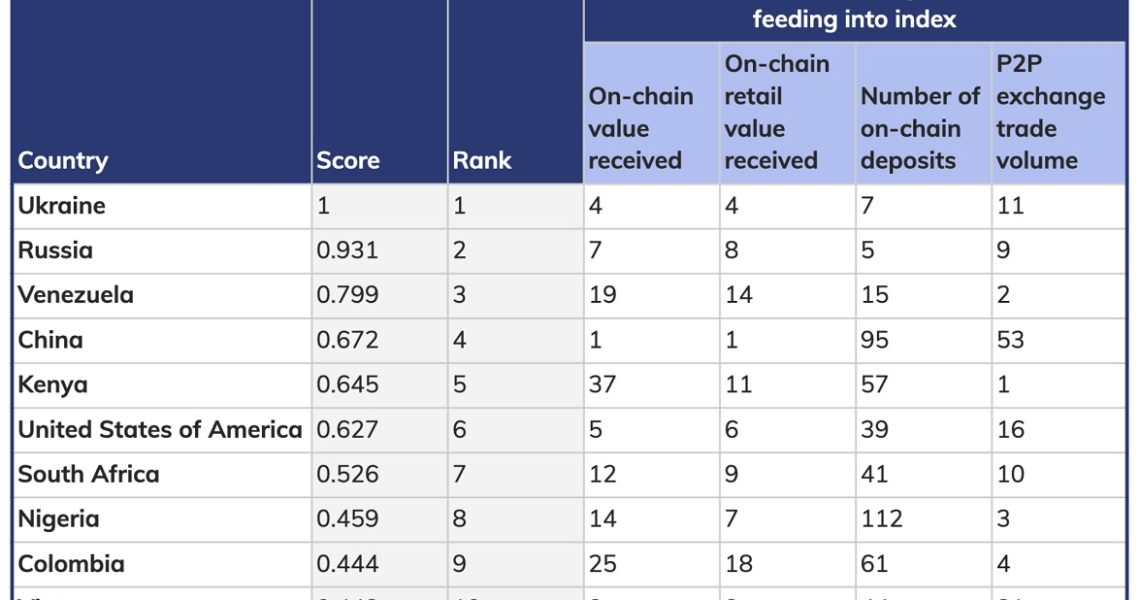 Ukraine, Russia, China, South Africa, Nigeria, Kenya, and the U.S. are among the top-ranking countries by cryptocurrency adoption, according to the 2020 Global Crypto Adoption Index compiled by blockchain data analytics firm Chainalysis.

Chainalysis’ 2020 Global Crypto Adoption Index, released Tuesday, ranks 154 countries based on their cryptocurrency adoption. “The goal of this metric is to rank each country by total cryptocurrency activity, but weight the rankings to favor countries where that amount is more significant based on the wealth of the average person and value of money generally within the country,” the firm explained.

The crypto adoption index is made up of four metrics, calculated by “estimating total cryptocurrency received by that country, and weighting the on-chain value based on PPP per capita, which is a measure of the country’s wealth per resident,” Chainalysis described. “The higher the ratio of on-chain value received to PPP per capita, the higher the ranking, meaning that if two countries had equal cryptocurrency value received, the country with the lower PPP per capita would rank ahead.” Noting that it will continue to tweak the methodology used, the firm claims:

This methodology represents one of the first ever attempts at a comprehensive country-level breakdown of global cryptocurrency activity.

Of the 154 countries analyzed, only 12 had “very little” crypto activities and are ranked the lowest, Chainalysis detailed, adding that the countries are Afghanistan, Algeria, Cape Verde, Chad, Fiji, Laos, Libya, Mongolia, Tajikistan, Turkmenistan, West Bank and Gaza, and Zimbabwe.

Following Chainalysis’ ranking publication, the Ukrainian Ministry of Digital Transformation commented: “The market of virtual assets in Ukraine is quite developed and has a significant turnover even on a global scale, but most of it is concentrated in the shadow zone, which creates potential risks for both the state, business and users.”

The ministry added that it “continues to create a legal framework for regulating the cryptocurrency market in Ukraine and hopes that in September the draft law on virtual assets will be considered by the parliament.”

What do you think about Chainalysis’ crypto adoption ranking? Let us know in the comments section below.