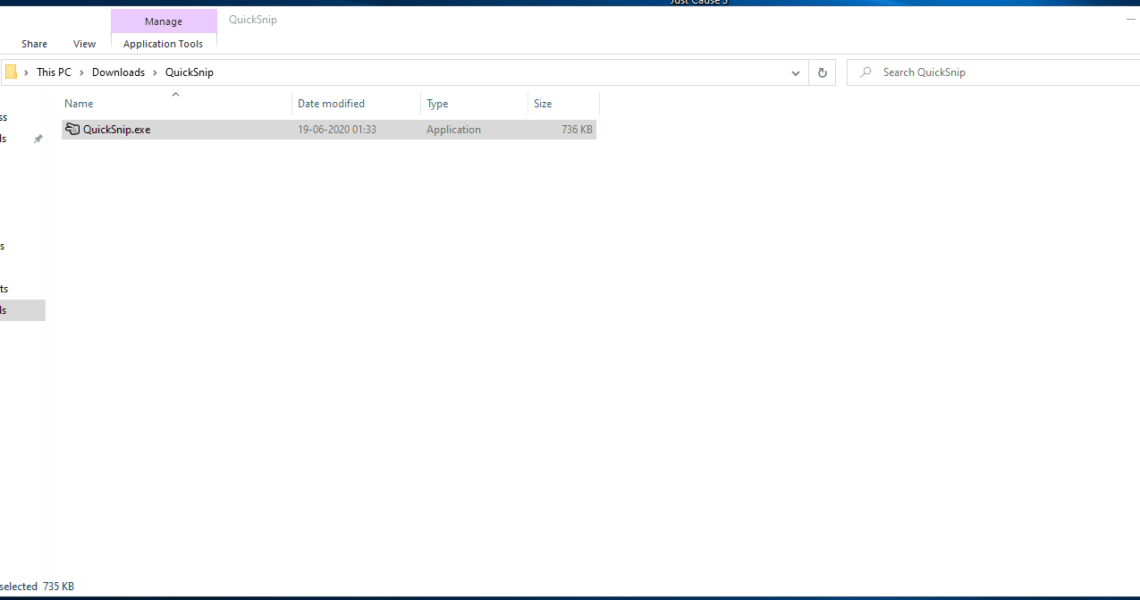 QuickSnip is a simple screenshot tool without an interface

Most screenshot programs including Windows’ built-in Snipping tool, Snip & Sketch have a common visual element, a user interface. QuickSnip is rather unique in this regard, because it doesn’t have an interface.

Don’t worry, it’s not a command-line tool either. Let me explain.

QuickSnip is a portable application. It comes in a 40KB archive, that contains a single file which is about 735KB. I suggest pinning it to the taskbar or create a desktop shortcut, you’ll see why I recommend this in a moment.

When you run QuickSnip it places an overlay, which acts as the screen region selector. Don’t just click anywhere. Instead, draw a box around the area of the screen that you wish to capture, and let go of the mouse.

The application will save the screenshot automatically. You can find the saved images under the “My PicturesSnips” folder. QuickSnip assigns a new name for every screenshot. It begins at snip_00000, and is incremented by 1. For e.g. snip_00001, snip_00002, and so on.

Is this a faster way than using the good old PrintScreen key? No, but that doesn’t save the image automatically, while QuickSnip does. This makes it quite faster in terms of saving the media. My personal favorite, ShareX, has it beat in this because it can capture the screenshot and save the image with the press of a single key. However, it does have way too many options, and that isn’t something some users may want to deal with.

The snapshots taken by QuickSnip are saved in the PNG format. There is no way to change it to use a different format. In addition to saving it to a file, the program also sends the image to the clipboard, ready for pasting in other programs.

The program isn’t flawless. The main issue with QuickSnip is that it exits immediately after a screenshot has been saved. To use it  you’ll need to open the application again. This is why it is recommended to use a taskbar shortcut.

If you were expecting an image editor to open after QuickSnip captured the snapshot, you should know that the program doesn’t come with one. As a matter of fact, no preview of the image is displayed on the screen. There is no sound played either if you are used to an audio cue, to indicate the screenshot has been saved. This can be a bit of bother, because the only way to verify if a screen region has been properly saved, is by manually opening the image.

Capturing screenshots with the mouse may be difficult for some users. If you draw the box in the wrong size,  you’ll have to discard it with a right-click, since there is no option to adjust the capture. This becomes a bigger problem if you want to capture a program’s window, because it is not possible with the application. QuickSnip does not support keyboard shortcuts. While we are on that topic, the program has absolutely no settings at all, so if you are looking for a screenshot tool that is customizable, this is not it.

QuickSnip is a good tool that is very user-friendly. The manual effort of selecting the screen area is not difficult, but unless you time it right, you may find yourself taking more screenshots than required. Still, the program could be helpful for people who aren’t tech-savvy or want to use a simple screenshot tool.