A modern enthusiast will scoff at the concept of a Chromebook – limited performance, capabilities, and a simplistic OS for doing some serious work? The fact is that the Chromebook, and Chrome OS, have been gazumping good portions of the notebook market share in recent years, mostly down to its stripped down nature but also the low pricing. In 2019 AMD relaunched its older A-series APUs for Chromebooks, meeting that market need. However, at CES this year we saw the first indication of premium $700+ Chromebooks from Intel. Now AMD is moving into a higher performance space with its Chromebook offerings with new optimized Ryzen hardware and Vega graphics.

AMD claims to have a 21% market share in the Chromebook space, using IDC data, and Chromebooks currently account for 18% of all notebook sales. The market is largely split into three categories: education, enterprise, and consumer, with education seeing a big uplift in recent months due to the pandemic. Also because of the pandemic, as well as the growth of Chromebooks as a viable tool for these markets, use-cases are expanding with new productivity applications becoming available as well as the need to drive multiple high resolution displays.

These are a few of the reasons why AMD is continuing its march into the Chromebook ecosystem. On a performance level, AMD states that the new Ryzen-class Chromebook APUs will offer double or better web performance than the A-series, and +66-150% performance in productivity and graphics tasks.

Two of the first of the new Chromebook devices is coming from HP – essentially the same device, except one is for consumer and the other is built for the Enterprise market with extra security features. 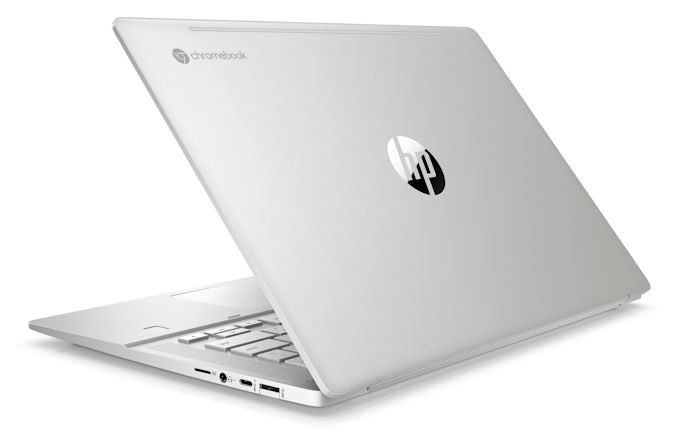 The HP Pro c645 will be offered with the new Athlon C-class and Ryzen C-class processors, as well as a HP Privacy Camera shutter and optional fingerprint sensor. Through HP’s management software and the onboard Titan C chip, it can also be externally managed in a corporate environment if required. The 14-inch 1080p or 768p display comes with optional touch, up to 16 GB of DDR4, and up to 128 GB of NVMe storage (the lowest configuration is 4 GB DDR4 with 32 GB eMMC). At 3.4 lbs, the c645 is tested to MIL-STD 810H specifications, is quoted as having 10.5 hours battery with optional fast charging, dual Type-C at 5 Gbps, dual Type-A at 5 Gbps, and an extended 2×2 Wi-Fi 6 design. There is also a microSD slot and a HDMI 1.4 port. The HP Pro c645 and c645 Enterprise will be available in December, with pricing to come later.

Today AMD will also claim that it already has six design wins for Chromebooks in the works, all scheduled to come out later this year from HP, Lenovo, and ASUS.