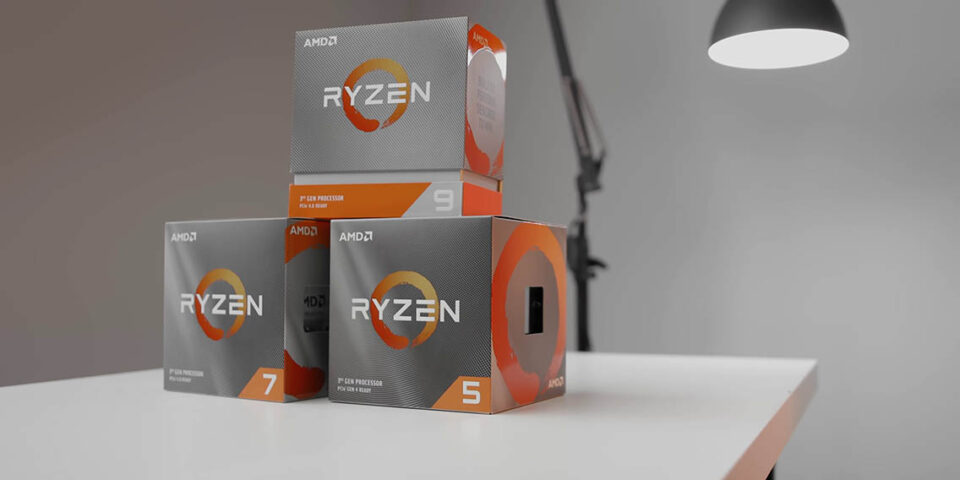 While RTX 3080 has now arrived, finding one is already almost impossible, but that’s not going to stop us from coming up with some cool Ampere-related content. In this case, we want to focus on AMD’s Ryzen scaling. You see if you caught our launch date coverage, which you can check it out right here, we approached this release differently from the others. Honestly, it was a foregone conclusion that the RTX 3080 can beat the fastest GPU from last generation. However, wondered if it could dominate when you install it onto an older system, could it still give you a massive performance improvement if you don’t give your gaming rig a complete facelift?

Instead of only pairing the RTX 3080 with a super expensive CPU that is out of most people’s budget, we installed it into a gaming system that you could buy 3 years ago. The results? Well it turned out that an older Core i7-7700K only lost by FPS at 1440P and was pretty much neck-and-neck with the Core i9-10900K at 4K. It was really impressive to see.

But you know what’s even more impressive? AMD’s dominance in the processor market right now. They aren’t just a more affordable option anymore, Ryzen is now the right choice for most users. Also third-gen Ryzen CPUs and B550 motherboards are no-brainers for people looking for a more affordable system upgrade. Since we already covered the Intel side, this article’s purpose is to show Ryzen users what they can expect with an RTX 3080, and whether or not they need to spend a lot of money to get the best out of it. Just like the previous article we will be comparing current Ryzen CPUs to the ones that were launched almost 3 years ago.

Before diving right into the benchmarks, what we are going in this article is sort of bookmarking the first-gen and third-gen Ryzen desktop lineups and it all boils down to price. On one hand we are using a 4-core/4-thread Ryzen 3 1300X, which was one of the most popular budget processors back when it was launched in 2017 for about $130 USD dollars. And yeah, we know that using a super high-end GPU on an entry-level CPU might sound completely nuts, but it should give us an interesting baseline for the benchmarks results, plus why not? It’s fun to experiment. The best equivalent to that right now is the Ryzen 3 3100 that goes for about $120 USD. It is also a native 4-core CPU, but AMD has now enabled SMT so it has 8 processing threads.

On the higher-end is the Ryzen 7 1700X, which has 8 cores and 16 threads. A lot of people chose it over the 1800X since it was a $100 USD less and it offered pretty similar performance, especially in gaming. The equivalent nowadays is the 16-thread Ryzen 7 3800XT, which was launched at $400 USD and it happens to be our favorite CPU right now. This thing is just awesome, on paper it has the same 4.7GHz boost clock as the 3900XT and the 3950X. However, our sample actually hits higher sustained frequencies in games than either of those. Basically that means it’s a better choice for a pure gaming system. The last selections were the super high-end CPUs, and for that we have the 16-core/32-thread Ryzen 9 3950X and of course Intel’s Core i9-10900K, since it is the fastest gaming CPU right now and it will be the benchmark against which all the others are measured.

Now you might be wondering why there aren’t any other processors here, and I guess I can just spill the beans right now: Believe it or not the actual differences between the 1300X and the highest-end Ryzen CPUs aren’t as big as you might expect, in gaming at least. The other processors just sort of fall into a narrow performance window that would make testing them redundant. As for the rest of the test system specs, they are pretty identical except for the memory on first-gen Ryzen since it just doesn’t like the speeds in excess of 3000MHz so we kept it at that speed. Otherwise, all the test systems were configured identically. Since this is a super high-end GPU, we are going to be testing at 1440P and 4K only, expect to see 1080P come back when we start looking at the RTX 3070 though. Also if you are using an ultrawide 21:9 3440×1440 monitor you can expect results that are a bit lower than 1440P, but not by a huge amount.

So how does Ryzen react when you hook it up to the fastest GPU right now? Well starting with Call of Duty and right away you will see that there is literally no visual difference between the 10900K, the 3800XT, and the 3950X. Things do tighten up a bit more at 4K, but the older CPUs are still pretty far behind. Like I said in our previous articles, the IW8 engine loves new architectures, frequencies, and more cores. At higher resolutions like these CS:GO still tends to be a bit CPU bottlenecked at 1440P, but the number of processing threads really doesn’t make an impact. This is all about how well a given architecture can perform in lightly threaded operations, which is why the first-gen Ryzen CPUs fall behind, even at 4K. Another thing you might start to see as these benchmarks go by is while the 1300X posts okay averages, it’s quad-core layout negatively impacts the overall smoothness of 1% lows in a lot of titles. In Doom you can start seeing evidence of GPU bottlenecking at 1440P, so all the processors are pretty close to one another. That situation gets even more apparent at 4K. It’s really amazing to see what happens when a game developer actually takes time to optimize their game properly.

Flight Simulator 2020 is the exact opposite of Doom. It’s super demanding on all of your systems resources, but it seems to love high CPU clocks and more than 4 processing threads. Then again this could come down to optimizations too, because this is a game that is really hard to run on any gaming rig. Zero Dawn brings us back to GPU bottlenecking again, which means all of the processors here perform almost identically to one another regardless of their generation. That is good to see for sure since you could have any CPU from the 1300Xto the 3950X and expect pretty similar frame rates in this game with an RTX 3080. Moving on to Rainbow Six Siege, and here we have another game that is the GPU limited even at 1440P. At 4K it ends up being pretty much a tie even if you are rocking a $130 CPU from 3 years ago.

In the last review I mentioned that the Unreal engine has a lot of optimizations built into it for newer architectures and these results prove it, but only at 1440P. In this case it’s obvious that the CPUs are becoming a bottleneck, at least at the high-end. However, when you switch over to 4K it’s more of the same with a straight line between every single one of those processors. There really isn’t much to say about Red Dead Redemption 2, it’s all GPU bound. What’s interesting is that it seems like Rockstar’s many patches have fixed some of the massive issues this game used to have with CPU scaling. Now regardless of whether you are playing at 1440P or 4K the graphics card will choke long before most processors become a problem for performance. But again, that quad-core architecture of the 1300X means it’s 1% low results take a beating. One of the main problems with Overwatch is that its engine is limited to 300 FPS, and it looks like all of these systems here can hit pretty close to that mark consistently with the RTX 3080 installed. At 4K there is a bit of a GPU limitation, but honestly at these kind of frame rates upgrading the CPU to the best that’s available right now isn’t going to make a massive difference.

Well that ended up busting a lot of preconceptions didn’t it? You see as I mentioned in our launch day coverage using the fastest CPU to benchmark graphics cards eliminates bottlenecks, but it might give readers the wrong impression that they need that type of hardware for something like an RTX 3080. In reality stepping up from a Ryzen 3 3100 to something like the Ryzen 9 3950X will only net you a few additional FPS. Why you may ask? Well because at 1440P and higher resolutions even the RTX 3080 can become a limiting factor, and that nullifies many of the advantages of high-end CPUs. Other cards like the RTX 3070 would see the gap narrow even more.

However, there are some exceptions, so I want to dive a bit further into what we saw. First of all, the 3900XT and 3950X dominate in productivity apps, but the raw number of cores actually works against them in gaming by limiting frequencies in lightly threaded workloads. That means a more efficient CPU like the Ryzen 7 3800XT can come along, bust out some high sustained speeds, and offer an equal to or better gaming experience… while costing hundreds less! The 1700X was a pleasant surprise, because optimizations for these first-gen and CPUs have made them pretty competitive in our benchmarks. With a few minor exceptions you can pop an RTX 3080 into an older AMD AM4 motherboard and expect frame rates that are within 15% of today’s best CPUs. Now that’s a cool upgrade story!

You see most games don’t benefit from a massive number of threads, but there is a thin red line between enough and not enough processing threads. I think that magic number seems to be 4, because we are starting to see older quad-core CPUs like this Ryzen 3 1300X really struggle, especially when it comes to in-game smoothness. This should be obvious, but I guess I will say it anyways: Just don’t pair a high-end GPU with a previous generation quad-core CPU because tons of performance will be left on the table. However, enabling SMT on the budget third-gen Ryzen 3 CPUs makes a world of difference for AMD. If you have a 1300X or 1200 you can confidently upgrade to the 3100, since it offers a low price and super competitive frame rates, even against much more expensive CPUs. Also remember that the upcoming RTX 3070 and more affordable cards from NVIDIA will create a GPU bottleneck even sooner, and therefore they will need even less CPU resources than what you have seen here.

I just want to wrap up by leveling with you guys. Don’t take this video as a recommendation to just go out and buy a low-end CPU and then pair with an RTX 3080. That’s just not an ideal setup. However, do take this video as a tool to evaluate what your needs are, and then hopefully lead you to a better choice when it comes to your next upgrade or your next build. So on that note, thank you so much for watching. If you are actually interested in this sort of content, especially when it comes to upcoming GPU releases like the RTX 3070 let us know in the comments.