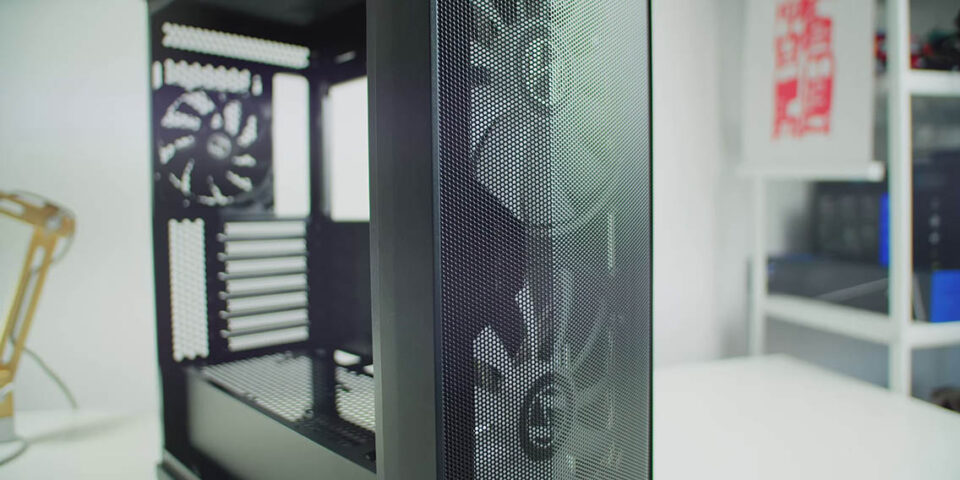 The $69 LANCOOL 215 mid-tower case offers an interesting look at what a budget enclosure can be in 2020. I feel like the 215 sets a good standard that other companies should strive towards in terms of airflow, but not so much in feature set because this is very basic case. I feel like the priority here was airflow and they certainly delivered.

You can see the temperatures in this case are absolutely under control, and this is impressive for a $69 USD enclosure. Of course, the front panel is a slight barrier to airflow because the huge front fans are not high static pressure and they only move at maximum 800 RPM. The reason why I’m showing you the temperatures right away is because Lian Li had to cut some corners in order to hit that price point and to achieve this performance level. I want to focus the rest of this review on talking about what is not so perfect about the 215, and perhaps maybe you why should look elsewhere if you are in the market for a budget-friendly mid-tower case.

First, let’s align our expectations because this is a budget enclosure. At $69 USD it’s not anything premium, and it does separate itself very well from the LANCOOL II Mesh. You can check out our full review to get acquainted with the Mesh enclosure, which is fantastic. The build quality on this cheaper model isn’t anything special, so the front panel is plastic aside from the metal mesh, and right next to the glass side panel it doesn’t look very premium. Let’s be honest though, the front mesh looks exactly like what Cooler Master delivered with the H500 series, so they probably took inspiration from there. You can even see the reinforcement on the center, which is exactly what Cooler Master did too. On the positive side, the metal mesh is fairly strong so it doesn’t bend even with a strong finger poke, and it also acts as a dust filter which eliminates the need to for another layer that would act as an airflow barrier.

The bling is appreciated as the two 200mm fans are ARGB and they connect to their own hub at the back at the case. There is also the Lian Li logo at the bottom that is also illuminated as part of this whole system. You can cycle the lightning between the different colours via the LED button on the top I/O.

For $69 this lighting is appreciated and what surprised me the most is that each fan has the ARGB pin, so you can connect them directly into your motherboard if you want to bypass the hub. By the way, you can also plug the hub into your motherboard and have control that through software. The hub can also support six 3-pin fans, which is great if you want to run everything off the hub, which is powered by a SATA power cable. The top dust filter is magnetic, which is pretty standard stuff.

One really positive thing about this enclosure is that size wise it’s not any bigger than the be quiet! Pure Base 500DX or the new Corsair 4000 series, yet there is additional spacing above the motherboard for a radiator and a set of fans so you are not going to be overlapping too much. The top area can support two 120mm or 140mm fans and/or 240mm or 280mm radiators, while the front can support up to a huge 360mm radiator. If you are more into air cooling, this case has clearance for an up to 166mm tall heatsink. You have a full 70mm of clearance in the power supply shroud for a radiator and set of fans. Also, because you can install the fans outside of the frame at the front, that means you can easily do a push-pull configuration.

By the way, you will notice a difference with the retail fans as they will have a much smaller sticker. Also, the front panel on my sample was really difficult to remove, but that will be changed because the tooling has been modified for easier removal.

The top I/O has proper spacing between the ports, but the audio jack is really far away and it’s kind of inconvenient since in all on the right edge. Also the tempered glass side panel is somehow inconvenient because there are no latches on the side panel at the rear, so when you remove the thumb screws you don’t have anything to pull the side panel with. Basically, you are going to have a lot of fingerprints to clean as you try to remove the side panel backwards.

Moving inside and this is a really basic interior, but both ATX and E-ATX motherboards are supported which is great. The entire power supply shroud is perforated. There is a massive dust filter that is removable from the back, and it spans the entire floor. A few things to notice here is that there are no vertical PCIe slots, the dual SSD caddies behind the motherboard tray do not have captive thumb screws, and those caddies cannot be relocated on top of the power supply shroud, which is something that you can do with most cases. There is a single hard drive cage in the bottom chamber, but without a drive caddy, so if you do insert a 3.5-inch drive there you have to use the screws on the side.

So as you can see by now this case is budget oriented and the experience is pretty barebones, especially when it comes to cable management. It’s a good thing that we have the hub included, so you don’t have to run the fans into your motherboard. The Velcro straps are super basic, and I find the lack of cable tie points around the enclosure – especially at the bottom – to be a little bit of a downside because I could have done a the better cable management job if the case allowed me to do so. For example, the cable management system in the new $79 Corsair 4000 series is far superior to what you find in the 215. Obviously, in the case of the LANCOOL 215 the priority has been given to airflow with the two front fans here and the exhaust 120mm fan.

Above you can see what the system looks like assembled. I really appreciate the extra height above the motherboard, so if you are installing any radiators there you have plenty of room. And for the $69 price point this is the best airflow enclosure in this class, despite the front panel not looking very pretty. If temps matter more than looks to you, then this might just be your best Bang for the Buck case.

This case is a clear example of product segmentation because the LANCOOL 215 is in its own budget class with a feature set that doesn’t infringe upon the features of the LANCOOL II Mesh, which is a higher-end $99 case. I feel like Lian Li is starting to become a bit more aggressive in its pricing strategy – a bit like Phanteks – and they are releasing enclosures in their own specific price categories without overstepping on the toes of their own products. That is a really good strategy for them as a company, and they have managed to top charts when it comes to temperatures with the 215, but like I said I was underwhelmed by this case as a user. In terms of building and handling the enclosure just never felt very good. It feels like a cheap enclosure and that’s exactly what you get. Having said that, if you dig the big fans, the cool temperatures, and the RGB lighting, then maybe it’s worth a closer look.