Elliptic says the Kucoin hacker has sold $17.1 million worth of tokens via decentralized exchanges (dex) platforms like Uniswap, Kyber Network, Tokenlon. The shift to dex applications comes after centralized projects came to the aid of the beleaguered exchange by blocking any cashing out of the hack related funds.

For the past few days, the blockchain analysis firm says it has been seeing stolen tokens being swapped with censorship-resistant cryptocurrencies like bitcoin. Despite this change in tactics, Elliptic insists it has the technology that can still trace the movement of such funds. 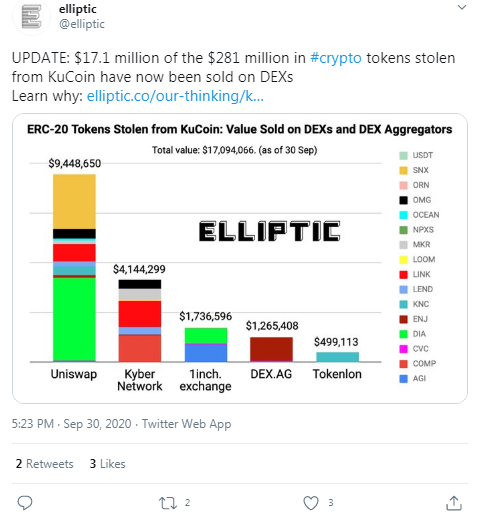 In a blog post on September 29, Elliptic cofounder and chief scientist, Tom Robinson revealed that of the stolen assets, “approximately US $152 million was made up of Ethereum-based tokens (ERC20s), including Tether (USDT), Chainlink (LINK), and Ocean Protocol (OCEAN).”

Robinson explains that these tokens are issued on blockchains such as Ethereum by “organizations that have the power to freeze accounts and recover the tokens.”

Indeed, on September 30, Kucoin said it had managed to recover about $140 million after ten projects cooperated with it by either swapping or replacing the stolen tokens. On realizing that this avenue had been blocked, the hacker(s) “tried to sell some of the tokens at two regular exchanges.”

However, according to Robinson, this laundering route was soon blocked as exchanges soon deployed blockchain analysis tools. Blockchain monitoring tools such as Elliptic’s can “identify whether deposited crypto assets originated from the Kucoin hack, and freeze any accounts receiving such funds.”

At the moment, dex applications provide the criminals with a means of exchanging the stolen tokens for Ether or other ERC20s. With their huge volumes and lack of KYC checks, dex platforms are now an obvious choice for crypto money launderers.

Still, Robinson makes the argument that Elliptic’s current monitoring tools can trace the flow of the stolen funds:

“Unlike centralized exchanges, which are dead-ends when it comes to tracing the flow of funds, with DEXs everything is recorded and visible on the blockchain.”

With $140 million now recovered while $17.1 million is already lost, it remains to be seen if the remaining $124 million, which is dominated in censorship-resistant cryptocurrencies, can be recovered.

What are your thoughts about the use of dex platforms by criminals when laundering crypto? Share your views in the comments section below.