During the last month since the fall of Empire Market, darknet market (DNM) patrons have been migrating to alternative markets. Meanwhile, global law enforcement recently arrested 179 individuals tied to DNMs and seized over $6.5 million in cryptocurrency and cash proceeds.

It hasn’t been a good month for DNM users after the fall of Empire Market, the DNM that exit scammed with over 2,638 BTC, ($30 million USD). Day in and day out, a great number of DNM patrons have been asking about joining alternative DNMs ever since Empire’s fall, and the Reddit forum r/darknet has grown to 135,000+ subscribers. Since the forum’s spike in subscriber growth, r/darknet moderators started a strict ban 28 days ago.

“Due to the increasing number of sourcing posts, scammer posts, and carding and fraud posts since Empire left, I will be banning anyone who breaks these rules,” the r/darknet mod said after Empire’s fall. “No warning and no [temporary] ban…I will just remove the post and ban you,” the administrator added.

Meanwhile, the top dog of all the DNMs today is Hydra, even though the market only caters to Russian speaking individuals. Behind Hydra is a slew of Western DNMs like Monopoly Market, White House Market, Dark Market, Cannazon Market, Deepsea Market, Tor Market, and Darkmarket.

A number of r/darknet subscribers, members of the Envoy Forum, and Dread forum users have been discussing joining the aforementioned DNMs. Additionally, the web portal, dark.fail, shows all of the DNMs and forums mentioned are online as of Sunday, October 4, 2020. 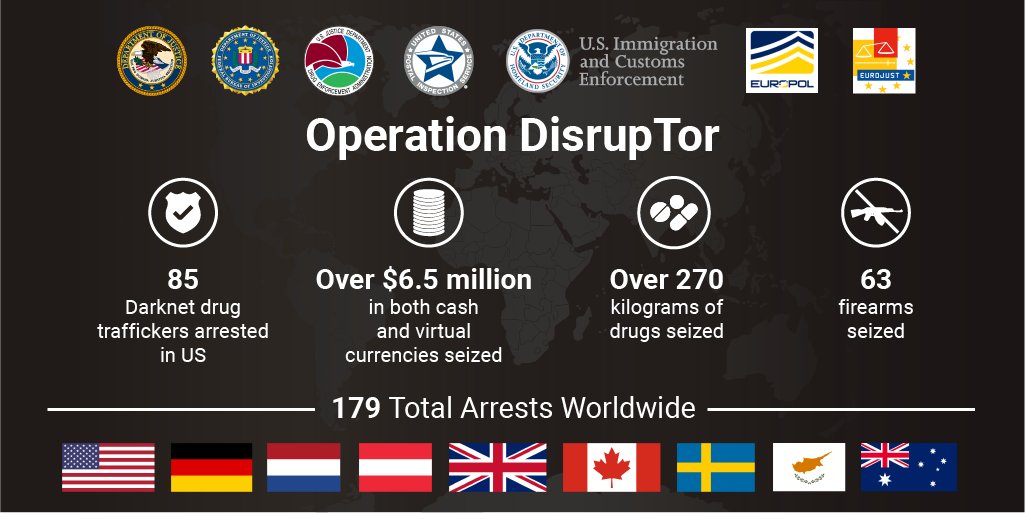 While DNM patrons have been scrambling to find alternative markets on the deep web, global law enforcement officials have recently revealed a major DNM bust. According to the announcement, the operation called “Disrup Tor” was established in May 2019 to battle DNMs and opioid traffickers. The operation is a law enforcement partnership between the U.S., JCODE, and Europol.

JCODE is an FBI-led Department of Justice initiative, which works closely with the DEA. Agents detailed on September 22, that international law enforcement was able to arrest 179 DNM associates, they seized 500 kilograms of drugs, and confiscated $6.5 million in mixed funds.

There are also rumors floating around of FBI agents messaging DNM dealers asking them to cooperate, according to dark.fail’s Twitter account and a Dread forum post. Furthermore, German police arrested Wall Street Market’s operators and two of the DNMs biggest vendors.

A recent report published by Wired notes that Europol told the publication that global law enforcement was “able to recover the Wall Street Market backend server, providing investigators with an invaluable trove of evidence.”

What do you think about the state of DNMs and global law enforcement’s recent bust called Disrup Tor? Let us know what you think in the comments section below.