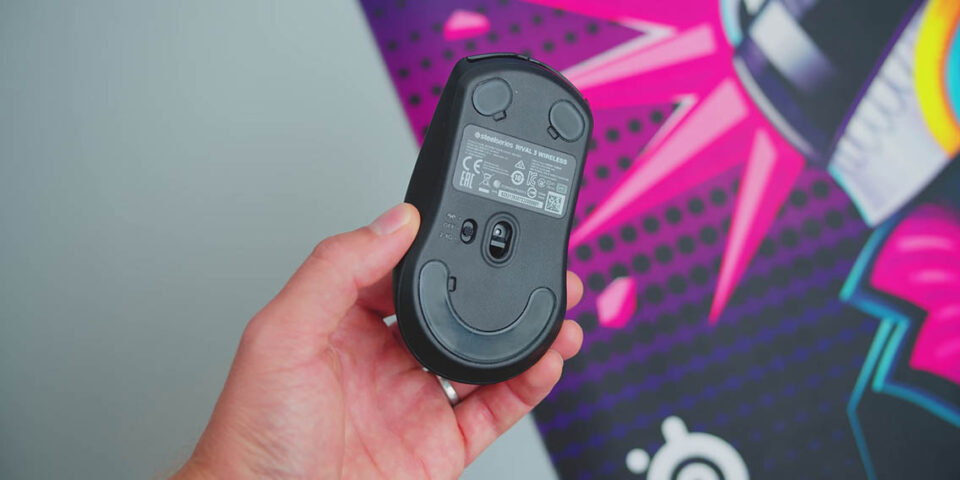 Lately I’ve been having so much fun with all these new mice releases, because I get to basically revisit my CS:GO training. Outside of using a mouse or testing a new peripheral, I don’t have much time to game and to train, but there has been so many awesome mice releases recently that I have had plenty of game time. Today I want to walk about the SteelSeries Rival 3 Wireless.

The reason why this mouse is so important is because it’s only $49 USD, which means it’s competing directly against the Logitech G305. That mouse has thus far been the model that I would recommend for budget gamers who want the wireless experience, but at only $50. Now what’s really interesting about SteelSeries is that they don’t really have an answer for the really lightweight mice on the market from the likes of Cooler Master/Glorious/Razer, but I’m really happy to see them introduce such a solid budget cordless mouse. In this review I want to highlight advantages and disadvantages of both the Rival 3 and G305, so you can make up your mind on which $50 wireless mouse is right for you.

One of the main advantages of the Rival 3 Wireless is what’s written on the box: Year-long battery life. The mouse is powered by two AAA batteries, with wireless receiver in a compartment right in-between. With both batteries installed in there you have up to 400 hours of continuous usage at 1000Hz polling rate, which is incredible. In contrast the G305 only lasts up to 250 hours via a single AA battery. That is still a lot, and because of the low battery indicator you will get a warning plenty of time in advance of it actually dying. Having said that, the battery advantage clearly does go to the Rival 3 Wireless, but not by a significant margin.

What is really cool here is that the mouse can be powered by a single battery on either side – you don’t need both installed – so not only do you have a kind of weight distribution customization potential, but you can also remove one of the batteries to have a much lighter body. And so this is one of the advantages but also disadvantage of the Rival 3, because the mouse itself (without any batteries) is almost 10 grams heavier than the G305. When we fully load up the batteries in both mice, you can see that 107 grams for the Rival 3 Wireless is a bit on the heavy side compared to the G305’s 97 grams. Removing one of the AAA batteries gives us an equivalent weight to that of the G305. Now the G305 has an additional trick up its sleeve because you can substitute an included battery with a lithium-ion battery, which is lighter, therefore further reducing its weight. Theoretically that same trick can be applied to the Rival 3 if you can find li-ion AAA batteries, which will give you a nice lightweight body

This conversation about weight really gave me an appreciation for other wireless lightweight mice that have the battery built-in, like the Razer Viper ultimate and the Logitech G Pro wireless, both of which are under 80 grams. If you look at the entire lineup, weight-wise the Rival 3 Wireless isn’t anything special, but with a single battery removed you get the same weight as the G305. Basically, what I’m trying to say here is that in stock form this mouse is a little heavy for my liking and gameplay style.

Now the built quality for the $49 price point feels awesome, just like it does on the $29 wired version. The top cover slides out easily, but it fits nice and secure it ins place. The coating on the entire body is textured giving you that feeling of anti-slip, and despite the body being asymmetrical this is not an ambidextrous shape. The browser buttons are only on the left side, so this is a right hand only mouse. Size and shape wise this is a mouse for medium to large hands, and it suits me my hybrid fingertip grip perfectly. The flaring in the back is nice for my thumb, but to be honest I prefer the shape of the G305 much more than the Rival 3. This is largely because of the slimmer shape and the slightly smaller body feel better for my hand size.

Another cool feature about this mouse is that it features both Bluetooth and 2.4GHz connection, so you can either use the dongle or switch it to Bluetooth mode, which will then blink the scrolling wheel blue indicating that it is actively pairing. This is excellent for Apple users, or if you want to spare the USB port on your laptop, and then switch over to 2.4GHz if you want to simultaneously connect this mouse to another system. is connected to something. Two connections on a single mouse at a $49 price point, that is pretty awesome. In contrast, the G305 only has the dongle connection, no Bluetooth here.

The primary triggers feel awesome and are rated at 60 million clicks, which also incredible for the $49 price point, especially compared to the switches on the Logitech G305, which also feel amazing but are only rated for 10 million clicks. Having said that, you will likely be replacing the mouse long before you actually get to the 60 million click lifespan. I have always liked SteelSeries scroll wheels because they are low to the body, meaning if I’m doing the middle click I’m not accidentally activating any of the triggers and the scroll steps are nice and tactile. The scroll wheel on the G305 has slightly lighter actuation, but still a really good scroll wheel for the $49 price point. Both mice have the DPI switch up top with up to five profiles that configure in the software. The software – SteelSeries Engine 3 and the Logitech G Hub – do exactly the same thing with DPI sensitivity changes and button customization.

The TrueMove Air sensor in the Rival 3 is slightly superior in terms of having an 18,000 maximum DPI, while the Hero sensor in the G305 goes up to 12,000 DPI but that is still more than sufficient. My gaming has been absolutely flawless with either mouse. In terms of sensor performance, no spin-outs, really low lift-off distance, and precise DPI adjustment too. Since I played at 1000 DPI and both mice have identical weight (when I’m using the Rival 3 wireless with only a single battery) the only difference was the shape. I still prefer the G305 shape because I feel like I have a bit more control with my flicks, whereas with the Rival 3 Wireless it’s a slightly chunkier mouse, but still quite comfortable.

In terms of a glide, I preferred the feet on the Rival 3 Wireless because they are larger and they are much smoother. By the way, one really interesting tidbit about the scroll wheel is that it only lights up when the mouse is not in-use, therefore preserving power when you are actually navigating the mouse. The one advantage of the G305 is that it wakes up instantly once you start to move it after it has gone to sleep, whereas with the Rival 3 Wireless you have to physically click one of the buttons or the scroll wheel for it to wake up since actually moving the mouse doesn’t wake it up.

I have been gaming with this mouse for the past two weeks and my CS:GO going performance has definitely improved since I started to train more. I really appreciate this barebones form factor that hits a really good price point while still offering incredible battery life and Bluetooth functionality. It is probably one of the reasons why this mouse is heavier versus the G305. Technically, the Rival 3 is superior with higher switch lifespan, better sensor, and much higher battery life. Honestly though, I have been using the G305 with my notebook and I’m down to one battery bar out of the three after like 9 months of use. Unless you are constantly using this as your main desktop mouse you probably won’t reach the 1 year battery life, but 400 hours is still fantastic. Now if you have both batteries populated the compromise here is the mouse is slightly heavy. I hope you enjoyed this G305 versus Rival 3 Wireless comparison, and let me know which one of these you would pick and why.