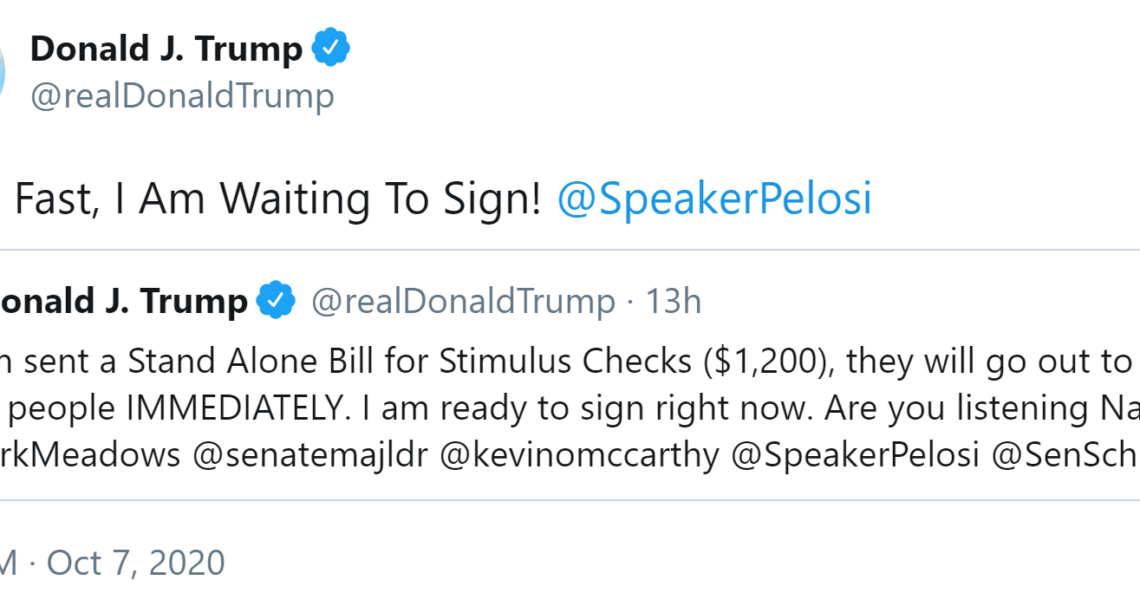 Congress has been urged to pass a stand-alone stimulus bill to immediately provide Americans with second stimulus checks of $1,200 after talks of approving a larger stimulus package of $2.2 trillion have stalled.

If I am sent a stand alone bill for stimulus checks ($1,200), they will go out to our great people immediately. I am ready to sign right now.

He followed this tweet with another one on Wednesday that is directed at House Speaker Nancy Pelosi. It says: “Move fast, I am waiting to sign.”

Trump’s action follows him abruptly calling off negotiations with Democrats on a larger stimulus package until after the election. The president announced Friday that he tested positive for coronavirus. According to reports, Treasury Secretary Steven Mnuchin subsequently told Pelosi during a phone call on Tuesday that negotiations were over.

The president explained in a series of tweets on Tuesday: “Nancy Pelosi is asking for $2.4 trillion dollars to bailout poorly run, high crime, Democrat states, money that is in no way related to Covid-19. We made a very generous offer of $1.6 trillion dollars and, as usual, she is not negotiating in good faith. I am rejecting their request, and looking to the future of our country. I have instructed my representatives to stop negotiating until after the election when, immediately after I win, we will pass a major stimulus bill that focuses on hardworking Americans and small business.”

“It’s hard to see any clear sane path on what he’s doing but the fact is, he saw the political downside of his statement of walking away from the negotiations,” Pelosi commented on Trump’s action in an interview with ABC’s The View on Wednesday. “He’s rebounding from a terrible mistake he made yesterday and the Republicans in Congress are going down the drain with him on that.”

House Democrats introduced an updated version of the $3.4 trillion Heroes Act last week that is estimated to cost about $2.2 trillion. However, White House senior economic adviser Larry Kudlow believes the number to be an underestimate, claiming that the bill would likely cost $2.6 trillion. The House originally passed the Heroes Act in May but the bill was stalled in the Senate.

Since the introduction of the bill last week, Pelosi has been in constant negotiation with Mnuchin, who has made a counteroffer of a $1.6 trillion stimulus package, which he described as similar to the $1.5 trillion proposal developed by the Problem Solvers Caucus, a 50-member bipartisan group. This proposal also provides for another round of $1,200 direct stimulus payments to Americans.

Besides another round of stimulus checks, Trump also urged the House and the Senate to “immediately” approve $25 billion for airline payroll support and $135 billion for the Paycheck Protection Program for small businesses. “Both of these will be fully paid for with unused funds from the Cares Act. Have this money. I will sign now,” he tweeted Tuesday. In addition, the president wrote: “I have asked Mitch McConnell not to delay, but to instead focus full time on approving my outstanding nominee to the United States Supreme Court, Amy Coney Barrett.”

Do you think Americans will soon get second $1,200 stimulus checks? Let us know in the comments section below.