Bitcoin and gold holder Dan Tapiero, says it is still early to talk of widespread crypto adoption as the proportion of users relative to the rest of the population remains low. Tapiero makes the remarks while referring to a study, which places Nigeria at top of the list of countries with the highest number of respondents that say they own or are using cryptocurrency. 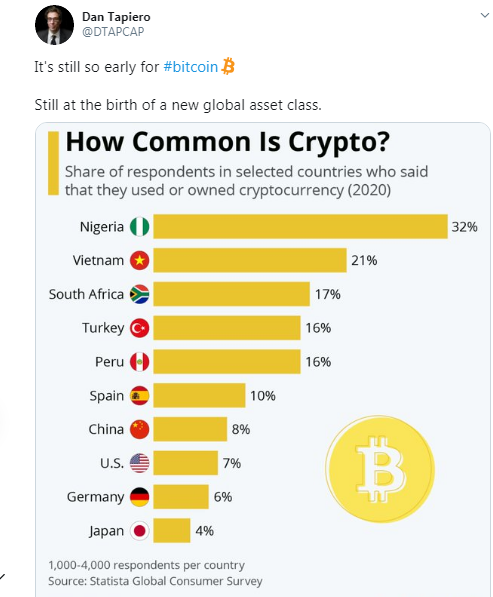 According to the study, 32% of surveyed Nigerians say they used or owned cryptocurrencies in 2020 while in Japan, which is last on the list, only 4% say they owned cryptos in 2020. The survey, which was conducted by Statista, shows that countries with emerging economies like Vietnam (21%) and South Africa (17%) have more respondents who say they used or owned cryptos in 2020. Spain (10%) is the only developed country where the percentage of respondents that own or used cryptocurrencies get to double-digit figures.

In the United States, which appeared to be the focus of Tapiero’s tweet, the percentage of respondents that confirm owning or using crypto is only 7%. In his tweet, Tapiero who is the Co-founder at 10T Holdings infers that the world is currently seeing the crypto which is “still at the birth of a new global asset class.” Some Twitter users were quick to query the methodology of the study and Tapeiro admits that “there are countries that belong on this list that are not listed.”

Meanwhile, in an earlier tweet, Tapiero claims that “it is the beginning of the end for banks” and urges them to either “adapt or perish.”

Time to pivot towards the digital asset ecosystem. Bitcoin is the pristine collateral at its centre. The whole new world now growing up alongside the legacy system. 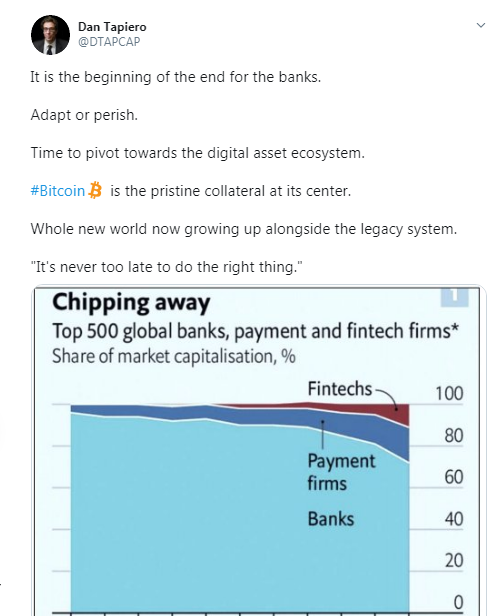 There are expectations that this trend is set to continue and banks that fail to embrace emerging technologies will lose influence.

Do you think cryptocurrency adoption is happening faster in some regions than in others? Tell us your thoughts in the comments section below.