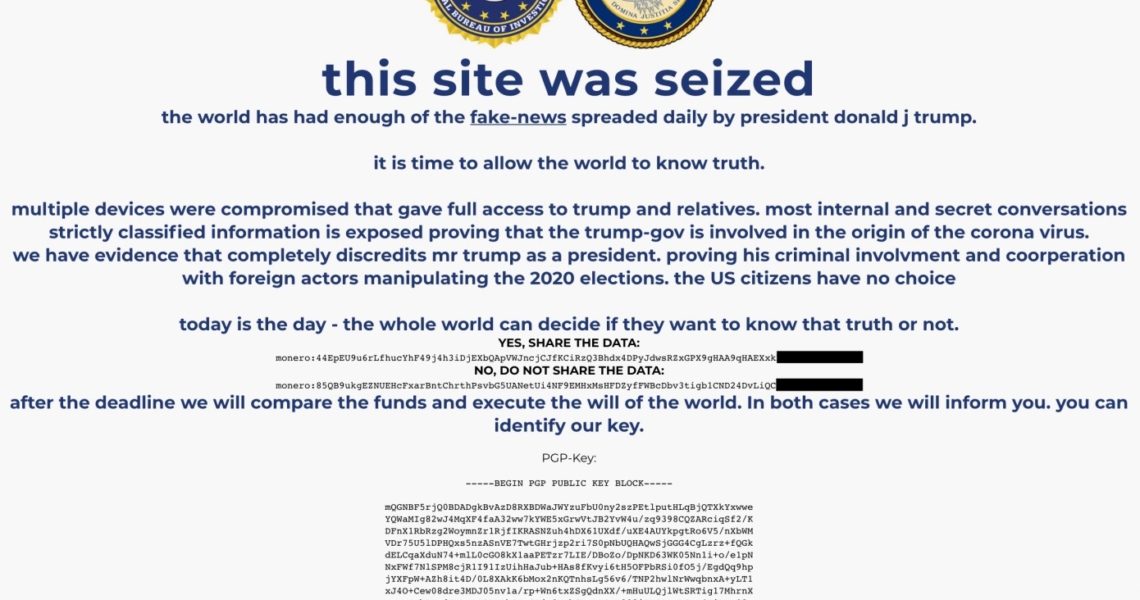 President Donald Trump’s campaign website was reportedly hacked Tuesday evening. Hackers claim to have “classified information” about Trump and the origin of the coronavirus. They asked crypto users to decide whether the information should be released or kept secret.

Tim Murtaugh, Director of Communications for Trump’s 2020 reelection campaign, confirmed in a tweet:

Earlier this evening, the Trump campaign website was defaced and we are working with law enforcement authorities to investigate the source of the attack.

Part of the website donaldjtrump.com was made to look like it was seized by the Federal Bureau of Investigation (FBI), displaying a “This site was seized” message over the website’s About page. The message reads: “The world has had enough of the fake news spreaded daily by President Donald J Trump. It is time to allow the world to know truth.”

The hackers claim to have compromised multiple devices giving them full access to “internal and secret conversations strictly classified information.” Accusing the Trump government of being involved with the origin of the coronavirus, they further claim to have evidence to completely discredit Trump as president.

The hackers then provided two monero addresses: one for those who want the data shared and the other for those who do not. After an unspecified deadline, the total amounts of cryptocurrency sent to the two addresses will be compared and the higher total will determine the fate of the data, the message details. Techcrunch reported that the page was signed with a PGP public key corresponding to an email address at a non-existent domain (planet.gov).

Within a few minutes, the web page reverted back to its original content. “There was no exposure to sensitive data because none of it is actually stored on the site,” Murtaugh insisted, noting that “The website has been restored.”

What do you think about this hack? Let us know in the comments section below.