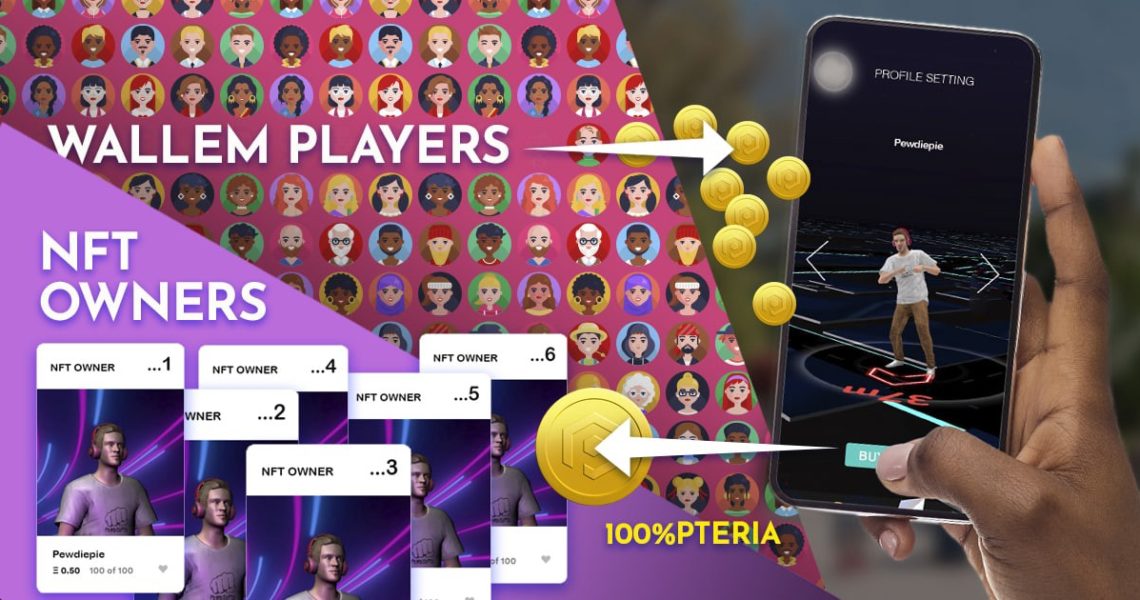 The world-famous gamer and Youtuber, Pewdiepie is getting involved with another blockchain project called Wallem, a 3D augmented reality video game that uses non-fungible tokens (NFTs) for skins and items. The game also rewards players with an Ethereum-based ERC20 token called pteria (PTE). The Youtuber also has a non-fungible token that represents a skin of Pewdiepie that can be purchased on the Rarible marketplace and used in Wallem’s virtual 3D world.

The popular Youtuber Pewdiepie is joining a new blockchain technology project called Wallem built on top of the Ethereum network. The Youtuber and gamer told his 107 million subscribers about the Wallem game on October 30, while playing in the 3D world on his channel.

Wallem is an augmented reality (AR) video game for iOS and Android users. The AR is integrated with the real world similar to the well known AR game Pokémon Go. In addition to the AR and 3D world, Wallem leverages the Ethereum blockchain for a native game currency called pteria (PTE) and NFT-powered skins and items.

On November 1, the Wallem team announced that the team has issued a limited number of NFTs via the Pteria DAO, the NFT skins represent unique skins. The Pteria DAO (following a positive majority vote) issued a limited number of NFTs representing skins that can be used within the Wallem app,” explained Wallem’s announcement. The team further stated:

The Wallem AR blockchain game is not the first time the famous Youtuber Pewdiepie has endorsed distributed ledger technology. In February 2018, Pewdiepie poked fun at Youtubers who shilled the Bitconnect crypto Ponzi. Then in April 2019, Pewdiepie joined the live streaming platform Dlive, an alternative to video platform Twitch.

Interestingly, when the Pewdiepie NFT becomes available on Rarible, NFT owners will be able to accrue revenue from future sales. For instance, “10% of all the crypto that Pewdiepie skins collect within the crypto events in Wallem,” the Wallem team notes.

Blockchain gaming and non-fungible tokens have become very popular these days. Nonfungible.com shows that there’s been over $1.5 million in NFT sales. During the last seven days, the average NFT sells for $60.58 according to the nonfungible.com stats web portal.

Moreover, a number of virtual world games utilize blockchain technology and many of them leverage the Ethereum network. VR worlds like Decentraland, Sandbox, Wallem, and Somnium Space are all trying to revolutionize the metaverse.