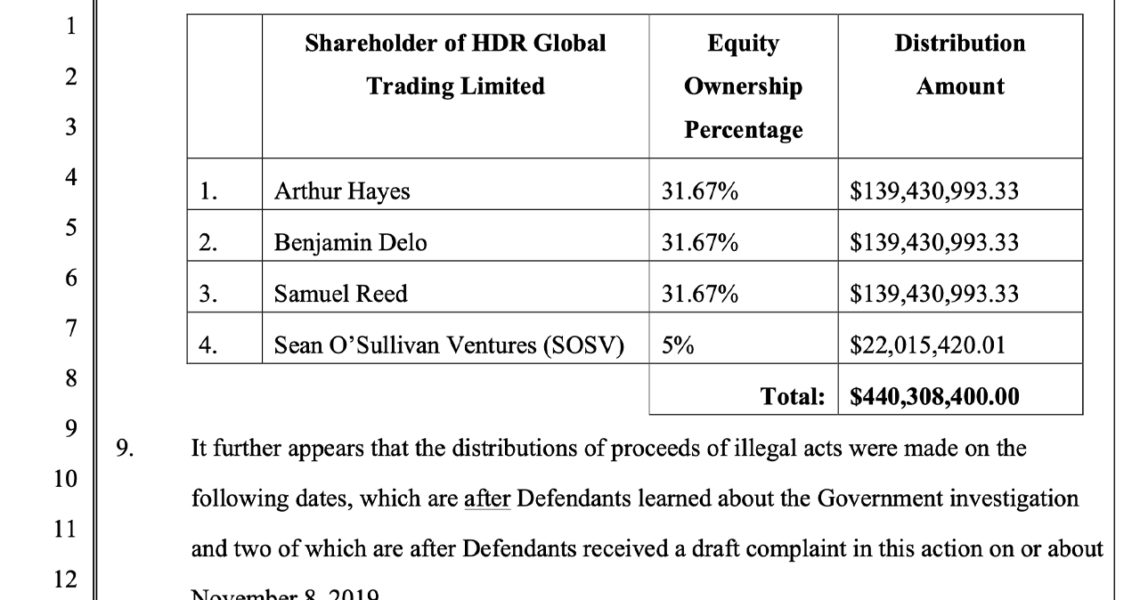 A civil lawsuit has been filed against the firm HDR Global Trading Limited, the parent company of the exchange Bitmex, alongside the three cofounders Arthur Hayes, Ben Delo, and Samuel Reed. Plaintiffs allege “the defendants’ Hayes, Delo, and Reed looted about $440,308,400 of proceeds of various nefarious activities.”

The cryptocurrency derivatives platform Bitmex is facing a lawsuit that claims the exchanges three cofounders “looted” $440 million from the platform. BMA LLC, Vitaly Dubinin, and Yaroslav Kolchin have filed the lawsuit against the popular crypto trading platform.

The recently filed lawsuit follows the charges against the exchange stemming from the U.S. Department of Justice (DoJ) and the Commodities Futures Trading Commission (CFTC).

The filing alleges that the defendants were “keenly aware” of the DoJ and CFTC investigations and criminal charges before law enforcement acted.

“While preparing to go on a lam from the U.S. authorities, defendants’ Hayes, Delo, and Reed looted about $440,308,400 of proceeds of various nefarious activities that took place on the Bitmex platform.”

The court filing was invoked by a litigation team called “Consensus Law” and Bitmex categorically denies the allegations.

“Pavel Pogodin of ‘Consensus Law’ has filed a series of increasingly spurious claims against us, and others in the cryptocurrency sector,” an HDR Global Trading Limited representative insists.

“We will deal with this through the normal litigation process and remain entirely confident the courts will see his claims for what they are,” the HDR rep added.

Pavel Pogodin believes that prior to the CFTC and DoJ crackdown, Bitmex executives were “trying to make its funds unavailable for the collection of future judgments against it.”