According to Razer, among the top requests from its users (aside from a toaster) is a more work-focused commercial style product using the same design identity as its popular Razer Blade and Blade Stealth series. Despite this going against the grain of the ‘gamer’ ethos that Razer is fond of, the company has finally let loose with its first generation Razer Book like – aimed specifically at users who want the Razer design and feel, but aimed at workflow rather than specifically for gaming. The cherry on top is the display.

As a laptop user that spends a lot of my time (in a usual year) on the road, having a mobile device that offers peak performance, versatility, and battery life is a must. One of the key design points for such a unit, which I haven’t been able to experience since my old Dell M4400 with a Core 2 Duo, has been a 16:10 display. The nature of 16:10 displays has fallen out of favor in recent generations, with most devices leaning towards 16:9 with traditional landscape in mind. The benefit of extending the vertical axis by 11% is one mainly for workflow – for video, it enables a full 16:9 video with extra controls at the bottom, and for coding or writing, it provides extra length for whatever is being written, allowing better at-a-glance productivity. The other notebook that does this in recent memory is a few of the Dell XPS 13 models, however Razer takes it up yet another gear. 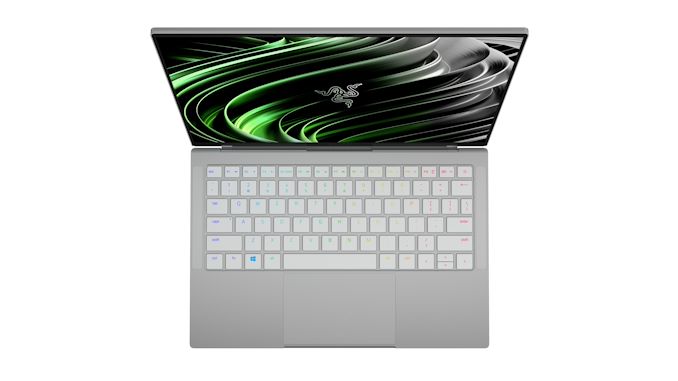 The top model of the Razer Book 13 has a full 4K display, with a 16:10 aspect ratio. So rather than the 3840×2160 resolution of a 16:9 display, we get 3840×2400. Trying to find a proper monitor with that resolution is difficult (or super expensive), so the fact that we now get it in a laptop is somewhat mind-boggling. Now bear in mind that this is a 13.4-inch screen, so I can already hear the cries that having that many pixels is going to be somewhat useless – the goal here is to also provide clarity for Asian type-scripts where detail is a must. A standard 1080p 13-inch display has 169 pixels per inch, whereas this display comes in at double, with 338 pixels per inch. This is a tad behind smartphones which show 400+ PPI. Part of the utility of the Razer Book 13 will be dependent on Windows Scaling compatibility.

The other issue that users might come up against with such a high density display with so many pixels is battery life. The Razer Book 13 is actually Intel Evo certified, which means that the display has to meet a certain efficiency level. Razer is promoting a 14+ hour battery life with the Book 13, which includes modern standby and fast charging.

Part of the Intel Evo specification means that yes, this is powered by an Intel Tiger Lake processor. Razer will be launching the Book 13 with three models, two with the Core i7-1165G7, and one with the Core i5-1135G7. These are all integrated graphics only, ensuring all the battery is spent on the compute resources.

The design of the Razer Book is very similar to the Razer Blade Stealth, but with the focus on the display resolution and the Evo certification. The use of Intel’s Tiger Lake enables Thunderbolt 4 support, and this device has two TB4 ports that both support fast charging. Along with this is a full-sized HDMI 2.0 port, a USB 3.2 Gen 1 Type-A port, a micro-SD card reader, and Wi-Fi 6. The keyboard has per-key RGB backlighting, which can be configured to change when different applications are active.

For memory and storage, as-sold by Razer, it will be equipped with up to 16 GB of LPDDR4X-4267 (the i5 will have 8 GB). Because this is LPDDR4X it won’t be user upgradeable, but it does enable the faster bandwidth (68.2 GB/s of LPDDR4X-4267 vs 51.2 GB/s of DDR4-3200) and power savings. The storage will be an M.2 PCIe 3.0 x4 drive of 512 GB, which can be user-upgraded to 2 TB. Unfortunately there is no fingerprint sensor, which should be a must for a professional device – instead Razer have gone down the Window Hello route.

One of the issues when we reviewed Tiger Lake in our performance preview is the peak thermal setting of the processor. Intel allows OEMs like Razer to support from 12 W to 28 W, but that number is not usually given by the OEM, and can represent significant performance differences. Razer let us know that the Razer Book 13 is configured to 24 W sustained, so we should see almost peak performance from the processor inside. This is enabled through Razer’s use of a vapor chamber cooler, and the fact that there’s not an extra discrete GPU to get in the way. In order to get the Evo certification, there is also Intel’s Adaptix technologies at play, which gives extra performance as the system transitions from turbo to sustained workloads. 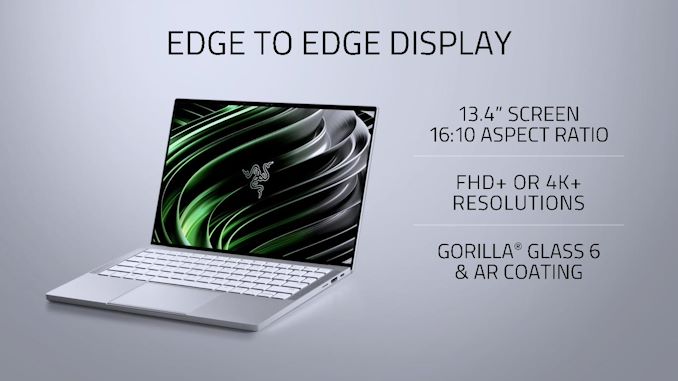 The full chassis is an aluminium CNC unibody construction, weighing approximately 3 lbs. For audio there are two upward firing speakers and a four-microphone array, all with THX certification.

The three specifications as sold are as follows:

The 3840×2400 display is only available on the Core i7 top-end model, which will retail for $2000. Undoubtedly that sounds like a lot for a device without a discrete GPU and ‘only’ 16 GB of LPDDR4X – there is some extra expense here going for the 16:10 high-end panel, and I suspect that some of the cost will be factored in that this isn’t going to be a super-high volume product. Razer is testing the waters with its first generation of Razer Book, to see what works and how the market will react.

The Razer Book 13 is expected to go on sale during November 2020, with better availability coming into December.