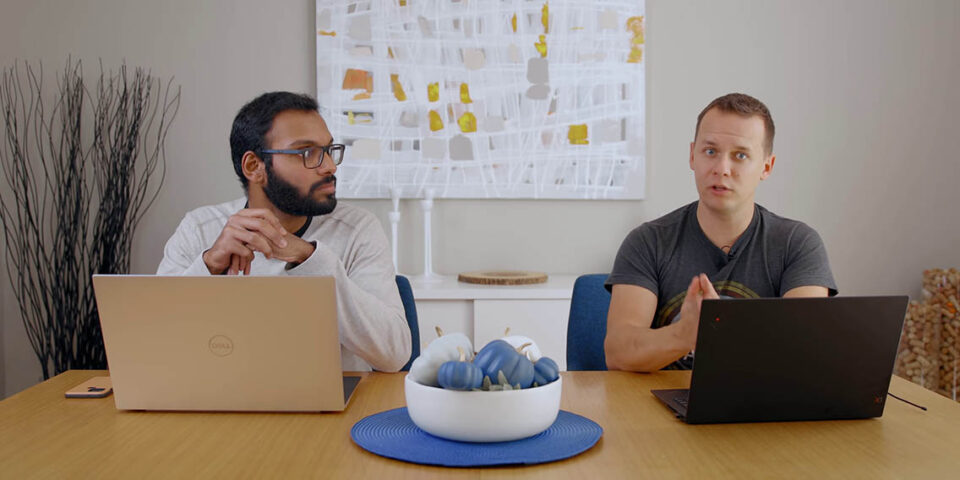 Mike: Yeah, and for us these are AMD finally coming back to their super, super competitive roots. We haven’t been pre-briefed, so these are really our first impressions right after watching the AMD livestream, but these appear to be really high-end GPUs and we are excited to share our thoughts.

Eber: At the beginning of the presentation AMD was talking about the performance improvement of RDNA 2 architecture. For instance it can deliver up to 50% better performance-per-watt compared to their previous generation, which was RDNA.

Mike: Right, and we don’t know many of the technical details behind it, but what it seems like is they are taking a page from the Zen 2 book and putting a very large local cache close to the processors cores. That is going to increase and supplement the bandwidth of the GDDR6 that is on the card itself. We are going to probably cover this a lot more in our review, but to me this is really, really exciting because you are able to get more bandwidth out of the card at a very similar power envelope. And I wanted to talk a little bit more about that 30% frequency increase too, because that is super important. It’s allowing them to broaden their frequency spectrum, and that actually has led them to increase their overall performance generationally by 54%. They are actually hitting above their performance targets, which is exactly what they did with the Zen 2 and the Zen 3. AMD promises something and they deliver it. Exactly. They use to overpromise and underdeliver, but now the tables have turned and that’s a really, really good for any company.

Eber: They have also included some advanced features with RDNA 2, so that includes support for DirectX Raytracing (DXR) and Variable Rate Shading (VRS), AI Mesh Shaders, and of course the last thing is just Sampler Feedback, which is a Direct3D feature for capturing and recording texture sampling information and locations.

Mike: a lot of these are part and parcel of DX 12 Ultimate, and this is something really important that AMD needs to bring to the table because NVIDIA has been talking about ray tracing for the last couple of years and actually included ray tracing cores within their architecture. AMD is now basically doing the exact same thing, but they have not talked at all about how they are accomplishing this, what kind of feature sets they are going to support, but at the same time this is bringing hardware accelerated ray tracing and all the other features within DX 12 Ultimate to RDNA 2.

Eber: And that brings us to the very first GPU that AMD announced, which is the RX 6800 XT. This is looking like a really sweet GPU that is meant to compete with the RTX 3080, and when you look at the specs it’s pretty good. It has 72 compute units, a 2015MHz game clock, a 2250MHz boost clock, and then the Infinity Cache design is 128MB. Do keep in mind that all three GPUs share the same Infinity Cache design, and they all feature the same video memory size, which is 16GB of GDDR6 instead of GDDR6X.

Mike: I think that Infinity Cache is really meant to bridge the gap between the bandwidth offered by GDDR6X on the RTX 3080 versus what the 6800 XT has. You also have to remember that AMD is doing all of this at 25W less for the total graphics power – the total board power – than the RTX 3080. Another thing that is super important – before we get to the performance of this thing – is the price.

Mike: That brings us to something that is super important too, from a customer satisfaction standpoint AMD needs to do what NVIDIA didn’t do and that is offer these cards at the listed price, but also have broad availability. If that means they have look into their crystal ball and determine that they can’t satisfy the demand by launch then they should push back availability, just like NVIDIA did with the RTX 3070. If AMD can hit their performance targets and they can hit those price points, and if they can get these cards in customer’s hands they will win this round.

Eber: Taking a look at the 4K results that AMD did showcase, they look very promising. The RX 6800 XT does end up either matching or beating the RTX 3080, and I really can’t wait to get my hands on this model to do a complete analysis on it.

Mike: Moving on to 1440P, and I think is the sweet spot right now because a lot of 1080P gamers are transitioning to slightly higher resolution displays. And even at this resolution you are seeing really comparable results to the RTX 3080. However, there is something I want to bring up in these charts, which is that right below that frames per second statement you see “Best API”, and if you drill down a little bit into the footnotes what you are going to see is that these results are based off of the best result from the best API, be DX11, DX12, or Vulcan for each GPU. What that might actually mean is that in Doom Eternal might be operating on Vulcan for one and a different API for another result. The other thing that I noticed is that AMD didn’t actually list the NVIDIA frames per second, so it’s a little bit harder to make direct comparisons with our own system over here.

Eber: Now we need to talk about Rage Mode, and as far as I’m concerned it seems like it’s just this one button in the software that you click on it and it overclocks the GPU and the CPU in hopes of better frame rates.

Mike: This is really interesting because it goes towards what AMD has been pushing, which is their whole ecosystem being the best ecosystem for gaming and being the best ecosystem for gamers, that means Zen 3 and RDNA 2 GPUs. And from what I understand is that you can click on one button within the Radeon settings and it will give you additional performance for both your CPU and your GPU without having to go into different pieces of software for each. Whether or not this will allow you to get substantial performance increases we will have to see. AMD claims up to 13% better performance compared to when you are running it in standard mode.

Mike: However… when it comes to performance it seems like it’s significantly faster than the RTX 3070. AMD did a little dig towards NVIDIA here, I don’t know if you caught it, but they brought out exactly what Jensen said. He said the RTX 3070 will be better than the RTX 2080 Ti, and at least in our testing and from most other people’s testing it isn’t. So what AMD is saying here is that yes, at 4K this model is better than the RTX 2080 Ti period. Something else that you have to see on this slide is that they benchmarked it with the Smart Access Memory enabled. Moving on to 1440P, we can see pretty much the same thing versus the RTX 2080 Ti. The RX 6800 is either better or a lot better across the spectrum.

Eber: The last GPU that was announced by Lisa SU is the RX 6900 XT, and this one is just like a poke in NVIDIA’s eye. This is definitely the flagship GPU of the RX 6000 series lineup. It looks very promising if you look at the specs. It comes with 80 compute units, the game clock and the boost clock is about the same as the RX 6800 XT, and the rest of the specs are basically the same, including the total board power design as well.

Mike: I think that total board power design really shows what AMD is doing here with their 7nm process. They have been refining it to the point where they have a RTX 3090 competitor at 300W, compared to the RTX 3090’s 350W power demands. Right. When we move on to the performance, we do see that it matches or beats that RTX 3090, but we also have to look at the little fine print where it says that is with Rage Mode enabled and with Smart Access Memory enabled. They are really pushing that ecosystem approach to achieve these numbers, but we also have to remember that even with those two items disabled it’s still an RTX 3090 competitor at $500 USD less. I think the most important thing here is AMD is gearing this towards gamers, it’s not this flip-flop between it being either for creators or gamers. This is geared towards folks who want to play 4K high resolution games.

Eber: I really wish they actually showcased some creative applications with the new GPUs, because that is one thing that they did miss from the presentation.

Mike: And I actually think that comment says a lot, because it also speaks to NVIDIA’s ecosystem approach. They have things like RTX Voice, Reflex, DLSS, ray tracing, and for folks like they have that studio driver ecosystem. I’m really hoping that AMD can bring something similar and also offer similar features that NVIDIA has right now. We have used a lot of these in our everyday process, especially RTX Voice. If AMD can bring not only the rasterization performance and ray tracing performance and a heavy feature set, they can really have something on their hands right now. I guess that leads us to our final thoughts about this whole presentation.

Eber: I think these three GPUs are really exciting and I think AMD definitely nailed it on the price point. If we look at the RX 6800, the RX 6800 XT, and the RX 6900 XT, they look very promising and we just can’t wait to get our hands on them and showcase our analysis. I think we will do the same older CPU/upgrade/CPU scaling article as we have been doing lately, so people can get a rough idea on how much they can expect when they spend this kind of money.

Mike: I think from all of my years in this industry where I’ve seen AMD winning, winning, winning, and then starting to sort of go by the wayside where they overpromised and underdelivered, seeing numbers like this really gives hope because a lot of people saw NVIDIA running away with both pricing and performance, especially the last couple of generations. Now with AMD back in the game, just like they are on the CPU side, if they can deliver the same performance in unbiased reviews as we saw in there hand-picked presentation slides it’s really going to be an interesting 2020 and 2021, if they can get that availability nailed.

Eber: Let us know what you think about AMD’s RDNA 2 announcement. Are you excited about these new GPUs? I’m pretty sure you are because everyone’s been looking forward to this. I guess if you caught our RTX 3070 review, this is definitely going to change the market.