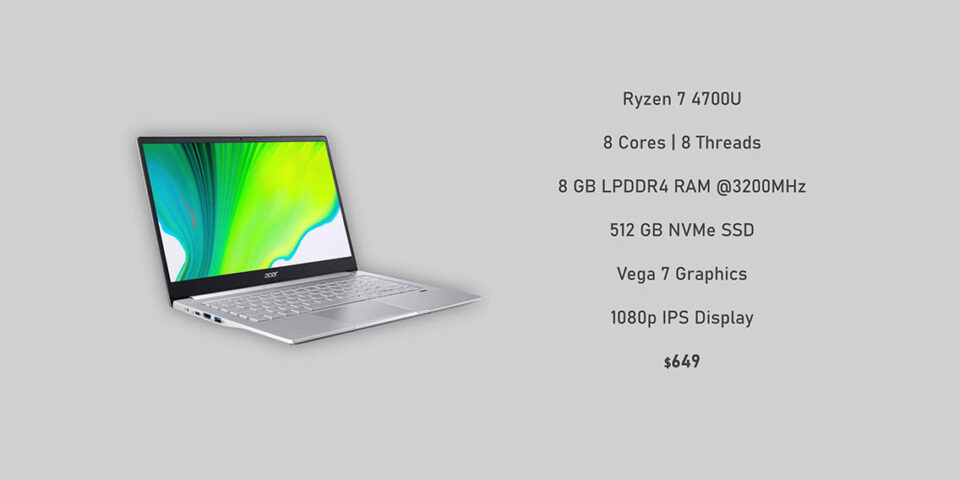 Let’s say you are in the market for a thin-and-light notebook, and your budget is around $700 but you are not willing to sacrifice on things like build quality, performance, and battery life. Well good news because your ideal laptop has arrived! Let me introduce you to the Swift 3 by Acer. Most of you might be wondering what’s really new and unique with this laptop? Well, first of all, it is rocking AMD’s Ryzen 4000U series CPU’s and it’s actually an AMD-based thin-and-light notebook that you can actually buy right now. Also, it is the least expensive thin-and-light that we have ever taken a look at coming in at $649 USD.

Now in the past we have reviewed a lot of expensive thin-and-light devices, and having taken a look at the Swift 3 it’s really amazing to see what Acer has been able to accomplish at that price point. it is very rare to find an affordable AMD-based thin-and-light device, and I want you to keep that in mind as I’m walking you through my analysis of this notebook. The question that really needs to be answered here is how much are you getting for $650 USD? There are a lot of great things to like about the Swift 3, but Acer had to cut some corners to hit that price point and we are going to talk about those. 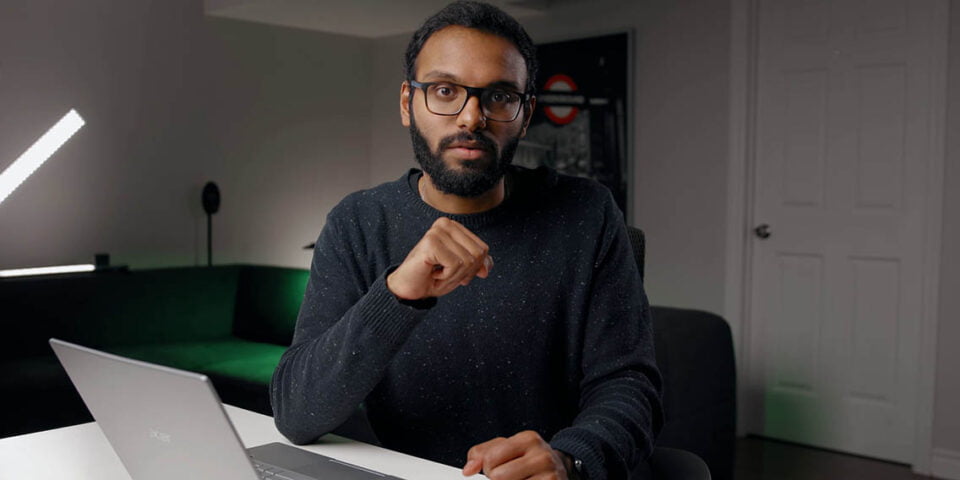 First off I’m going to jump right into the specs, because you are really getting some serious horsepower here for $650 USD. The main specs consist of a Ryzen 7 4700U with 8 cores/8 threads, 8GB of LPDDR4 RAM, a 512GB NVMe SSD, Vega 7 graphics, and a 1080P IPS display. That’s a great potent combination of parts for this price, and there is no real weak spots, at least on paper…

…but the display isn’t the best. Everyone has talking about how terrible it is, that it doesn’t really get bright enough to view content comfortably outdoors, and the colour accuracy is atrocious. Here is the thing though, I ran it through a display quality analysis test and it covers 64% sRGB, 47% Adobe RGB, and 47% DCI-P3. The numbers don’t lie, it’s not necessarily the most colour accurate screen, but to be perfectly honest with you subjectively it looks better than the numbers make it out to be. When we opened this laptop out of the box for the first time I was telling Mike that it was actually not a bad display, it was actually pretty good at first glance. I couldn’t say the same thing for something like the TUF A15, when we opened that laptop out of the box we knew immediately that the display was the worst because you could clearly tell that the colours are off and the contrast ratios are totally off. That is not the case here, and let’s not forget that this is a $650 laptop. I highly suggest that you don’t just ignore this laptop because of the display, it’s perfectly fine to get you through your casual day-to-day tasks.

With all of that out of the way let’s talk about the design and build quality. Surprisingly, it’s really, really good. The top and bottom are crafted in a thin sheet of aluminum, while the palm rest is made out of magnesium. When you pick this thing up it doesn’t feel plasticky, it feels similar to the IdeaPad Slim 7 that I checked out recently… which is a notebook that you unfortunately can’t buy. The design is very simple, no fancy textures, and it doesn’t pick up fingerprints easily, so that’s nice. They hinge super rigid, it barely wobbles, which I really appreciate. The only thing that you need to watch out for is that it’s impossible to open this laptop with one hand, you have to use both your hands to open it. This is obviously because of that strong stiff hinge. 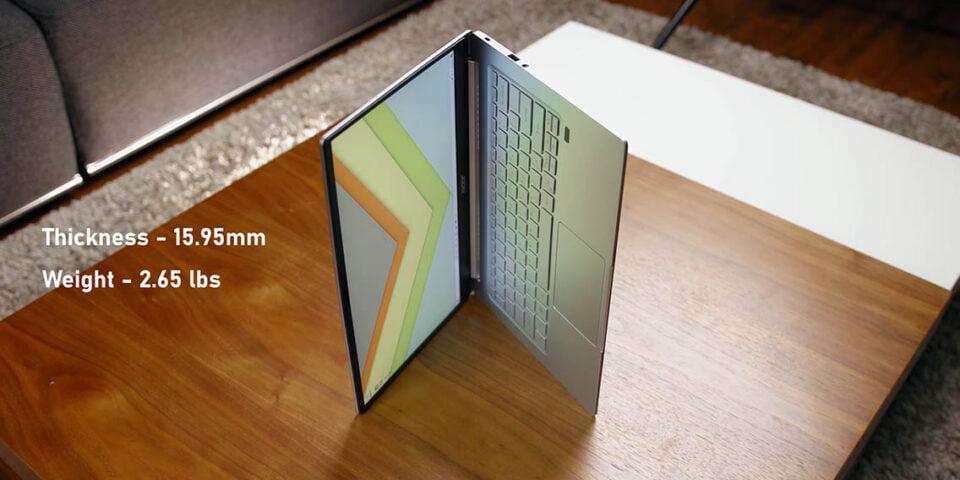 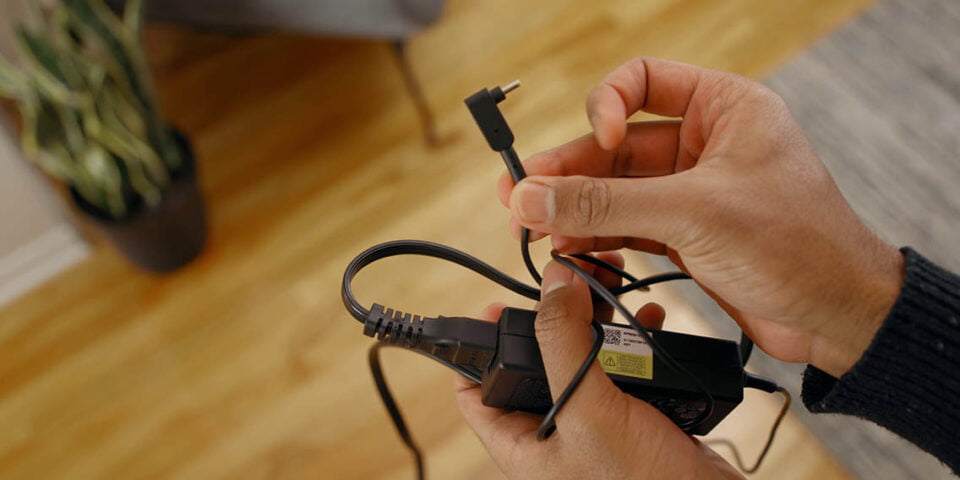 As for size, it’s 15.95mm thick and it only weighs a light 2.65 lbs. It’s a little bit thicker than the Zenbook 14 that we looked at featuring the same Ryzen CPU, but it is still perfectly portable. The power cable is long enough, but when you start manipulating it for the first time you will instantly notice how cheap it is. It is worse than the cables that come with your smartphone charger.

The keyboard layout is pretty straightforward, the keys are surprisingly really good with excellent feedback and good travel distance. I really enjoyed my time typing on it. By default the secondary function keys are set as primary, so you can adjust volume, brightness, and other controls on-the-fly, but unfortunately you can’t switch them to secondary. The keys are LED backlit and the brightness is alright. You only get one setting to either turn it on or off, no brightness adjustments whatsoever. The trackpad on the other hand is good, it’s a plastic surface and it gets the job done. The integrated primary electronic buttons are pretty good, nice and tactile, no complaints there. Acer has also included a fingerprint reader right by the arrow keys, but it’s bad, like really bad. Setting it up alone took almost 5 minutes and naturally that led to login failures, so I had to rely on my password to get into the laptop. If you are putting a really cheap fingerprint sensor you might as well just not put one in the first place, so Acer take note and save some money there.

This is the webcam test on the Swift 3 and the video quality looks pretty good, in fact it looks better than some more expensive notebooks that we have taken a look at in the past. The microphone also sounds really nice and honestly I’m surprised at how good it sounds for a $650 laptop. I think Acer really did a good job of not cheapening out on that department, so this laptop is good for business meetings and all that stuff. The speakers are bottom facing and they are okay, don’t expect them to blow your minds because you can get away with a little bit of vocal listening, but if you are into music that emphasizes a lot on the lower ends it’s not going to cut it because there is absolutely no bass. You might want to rely on either external speakers or headphones if you are serious about audio quality. 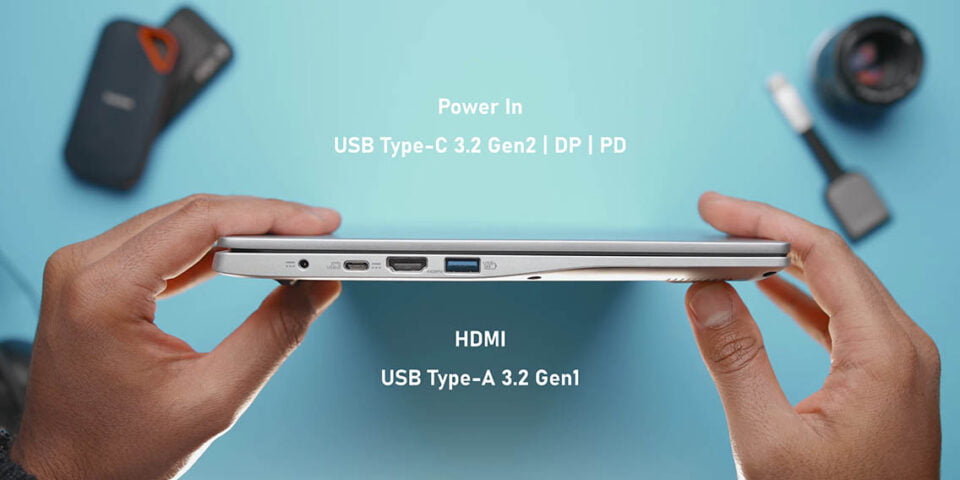 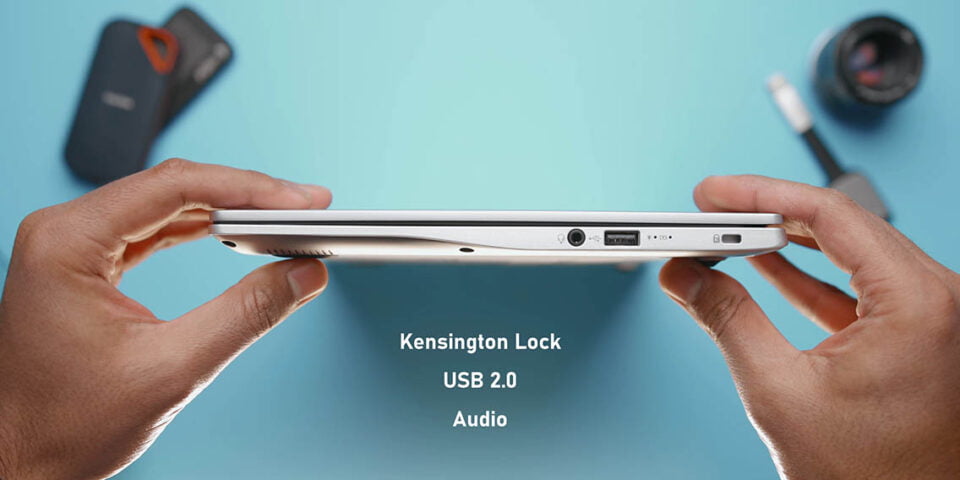 Taking a look at the I/O, and on the left-hand side you have s power-in jack and USB 3.2 Gen2 Type-C port – highly appreciated – that also functions as a DisplayPort and it supports power delivery, so that’s nice. You also have HDMI, USB 3.2 Gen1, with support for power off charging, and on the right hand side you have your Kensington lock, a USB 2.0 port, and a combo audio jack.

Ask for upgradability, there is not a lot going on over here. The memory is soldered onto the PCB, the only component that is user upgradable is the NVMe SSD, and the drive speeds are pretty good. Again for this price point I was expecting a SATA-based M.2 drive, but that is not the case here. It actually competes with the more expensive notebooks out there.

It also comes with a 3-cell 48Wh battery and it supports fast charge. Battery life is actually pretty good, during our light load test the Swift 3 lasted just a tad below 14 hours, which is right up there with the Zenbook Flip S (which features Intel’s new Tiger Lake CPU). Also keep in mind that that Zenbook notebook has a bigger battery, so AMD’s power efficiency really comes in clutch here. Switching gears to our heavy load test, and we expected it to not last that long because it is the smallest battery we have seen on a thin-and-light notebook, so keep your expectations low in this area.

Now let’s move on to how this thing performs and looking at temperatures and clock speeds over time. The results are right in-line with what we expect from a 4700U operating at around 16W. The average clock speeds hover around the 2.7GHz mark, which is well above the base clock, and temperature has never really made their way above 77°C, though they were still climbing by the end of the test. The interesting thing about this is the Swift 3 was whisper quiet, even when processing a heavy all-core load. It really feels like Acer’s goal here was to minimize noise. In some cases we have seen surface temperatures get sacrificed for acoustics, but that didn’t really happen either. Both the top and the bottom of the Swift 3 stays pretty cool to the touch. At least from these tests it’s pretty impressive what Acer has done with this chassis.

Moving on to actual performance, and as you can see the Swift 3 is trailing the Zenbook 14 in quite a few tests, even though it maintains a slightly higher average clock speed. That could be due to the lower DDR4-3200 memory speeds Acer’s using versus the DDR4-3733 on the Zenbook. Then again, there are a few situations like MATLAB and WinRAR where the Swift comes out on top. I should also mention that the 8GB of RAM could be a factor in some more intensive programs like Adobe Premiere. Now I do want to talk about that 8GB of memory, because I personally don’t see that as a huge bottleneck or limiting factor that would kill the overall user experience using the Swift 3. Sure, if you are a heavy Chrome user that uses like 50 or a 100 tabs at the same time you will obviously start to notice a slowed on because as you all know Chrome loves memory. Also, if you are into a little bit of light video or photo editing having more memory is definitely beneficial, but if you are someone who is just shopping around for a laptop within this price range it should be perfectly fine. And if you think about it even with 8GB of RAM it still manages to beat the pants off Intel’s laptops in our multi-core tests, so that’s kind of interesting.

Now onto gaining performance, and well… it is what it is. The Swift 3 can get away with some really light games, but nothing more than that. The ironic thing here is p and I have to say this again – this $650 laptop with its AMD CPU can still beat up the Zenbook Flip S, which packs Intel’s newest Tiger Lake CPU, and costs a whole lot more money. 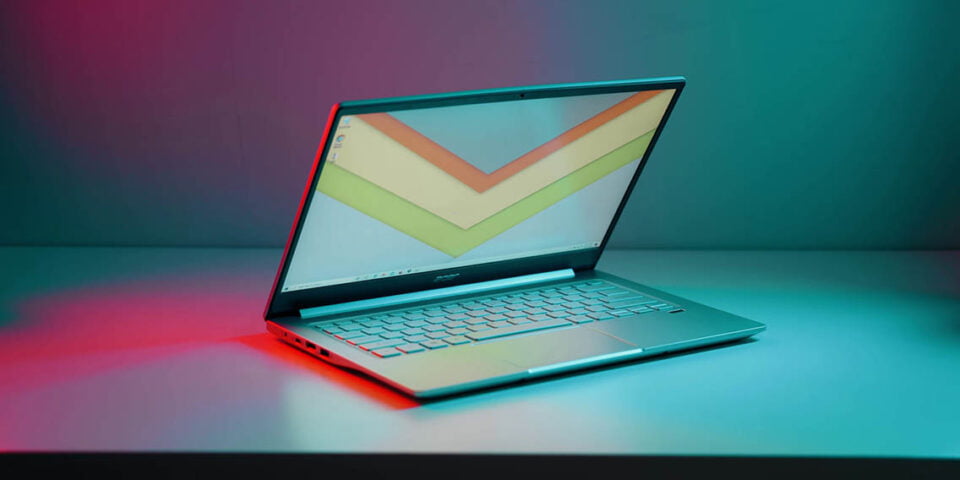 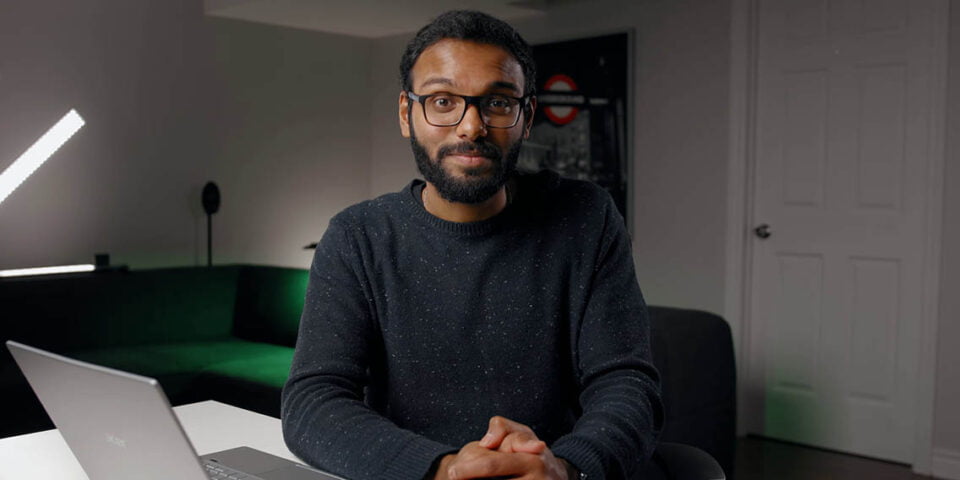 As we come to a close, here is my verdict of the Swift 3. Acer’s goal with this laptop was to deliver a balanced thin-and-light notebook with really good performance for the price. And I think it is clear that they have done that. They accomplished that because the Ryzen 4700U does a great job in our multi-core tests, and it actually beats the most expensive notebooks that we have tested with Intel CPU’s. And the fact that we are getting that level performance for $650 is amazing. When you look at the rest of laptop it’s also really solid. The design is very nice, the build quality is excellent, and the hinge, keyboard, trackpad, IO are all also really good. The webcam quality is surprisingly good too. The only soft spot is the display, but it is really not a trash level display, don’t ignore this laptop because of it, because you won’t find anything better in this price range. Take a look at it, see what you think, and then pull the trigger because it’s not that bad. I wholeheartedly recommend this laptop because of its excellent performance to price ratio, and because it’s just really good overall.