Bitcoiners on social media have panned remarks by acting U.S. currency comptroller Brian Brooks that bitcoin is owned by China due to the country’s disproportionate share of the crypto’s mining power. The bitcoiners argue that the disproportionate number of miners stationed in China only means the corresponding block rewards will reflect this imbalance. They add that no country owns bitcoin.

According to Brooks, who has been tapped as the substantive director of the Office of the Comptroller of Currency (OCC), bitcoin miners in China possess more than 50% of the mining capacity. In comments made during a video interview, the pro-crypto Brooks suggests the U.S. is losing the internet 2.0 leadership race to the Asian country. In a short video shared by a Twitter user on November 17, the currency comptroller asks:

As a country, we now face a geostrategic competitiveness issue, which is: Do we in the United States want to own the internet 2.0 in the same way we owned internet 1.0.

However, just like many others, Twitter user ‘Clashicly’ pushes back against Brooks’ assertion. He says “the only risk is CCP firewalls (that) cause a non-contentious fork and a reorg of a minor fork which forces confirmed [transactions] back in mempool.”

The user adds that “this has the greatest risk to exchanges if CCP pools are many times those outside the firewall and exchanges allow deposits after 6 confirms, which could be thrown back in the mempool and double-spent.”

Other users think Brooks is attempting to draw the U.S. government’s attention to the importance of controlling bitcoin’s hashrate.

Still, others like Twitter user rabbit, appear to support Brooks’ comment by reminding other users that “currently >65% of the hash power is located in China.” The user adds:

Supposedly, BTC was created to be decentralized, but mining rewards create an economy of scale in which the first miner will grow his market share into (a) monopoly (>51%)

Impact of a Chinese crackdown on Exchanges

Interestingly, reports coming from China suggest the country is clamping down on cryptocurrency exchanges and mining-related businesses. According to one report, as a consequence of this crackdown, “Chinese miners are facing a major problem in paying electricity bills.” 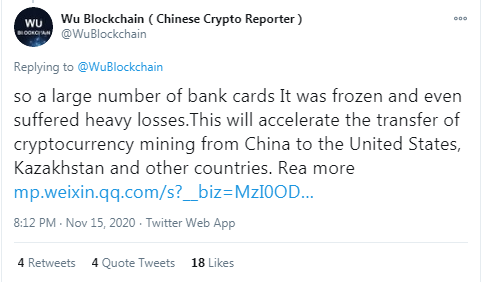 The report adds that “74% of miners surveyed said the payment of electricity bills has been greatly affected.” Many believe this crackdown will accelerate the migration of miners from China to countries like Kazakhstan and the U.S., therefore undercutting Brooks’ assertions.

Do you agree with Brian Brooks’ remarks that China owns bitcoin? Tell us what you think in the comments section below.