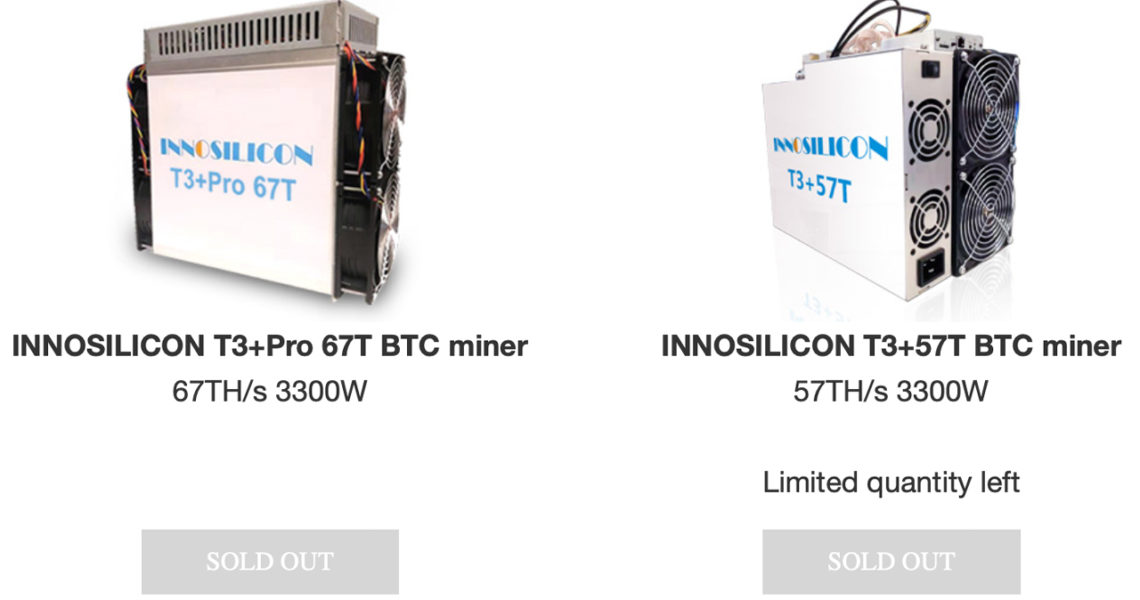 While the bitcoin economy has swelled in value, the overall network hashrate has gradually climbed higher as miners are making a lot of money confirming blocks. However, obtaining bitcoin mining rigs isn’t so easy these days, and regional reports from China indicate a great number of ASIC manufacturers are sold out for months. Moreover, because of the clear shortage, bitcoin mining rigs being sold on secondary markets have seen values increase by 30-40% per machine.

Bitcoin mining is extremely competitive, as massive operations with warehouses filled with application-specific integrated circuit (ASIC) devices are pointing hashrate at the BTC chain in order to profit. Bitcoin (BTC) prices per unit increased in value a great deal this year and touched an all-time price high on a variety of exchanges worldwide on November 30, 2020.

Just recently, Chinese financial columnist, Vincent He, reported that while BTC prices are skyrocketing, “bitcoin miners are sold out.” The report from China notes that presently both “new and old bitcoin mining machines have gained a 30-40% increase” in value. Further, while interviewing “some core mining practitioners in China,” the author explained that miners are growing worried there might not be enough machines.

Vincent He further concluded that people suspect “large-scale institutional buyers” are eating up all the machines. This has been a consistent trend in 2020, as news.Bitcoin.com reported on multiple mining operations like Marathon Group, Hut8, and Riot Blockchain purchasing vast quantities of ASIC miners.

While looking at the major ASIC mining rig manufacturers’ websites one can see that most units are indeed sold out. Bitmain’s latest two models, the Antminer series S19s both 84 to 95 terahash per second (TH/s) are sold out. Not to mention the fact that the batches are not shipping until May 2021. Similarly, Bitmain’s competitor, Microbt’s Whatsminer machines are also unavailable to ship for the next four months.

This includes the popular Whatsminer M30S series and lower models between 88 to 100TH/s. The firm’s latest ASIC bitcoin mining rig, the Whatsminer M30S++ (112TH/s) is also 120 days out until the next shipment. These bitcoin mining rigs made by Microbt and Bitmain are not only sold out but they are the world’s top-performing models in terms of profits today.

Looking at the web portal from the ASIC rig manufacturer Ebang shows that every model sold won’t be shipped until “3-3.5 months after payment.” Canaan buyers have to inquire with the company’s message system in order to purchase ASIC mining rigs.

It is uncertain whether or not Canaan has miners available to sell, but the company recently announced the launch of a new Avalonminer. Although the latest Avalonminer 1246 Pro (90TH/s) won’t be sold on the open market until January 2021. Another top manufacturing company on the list of profitable mining rigs is Innosilicon, but the firm’s webshop explains that every model that mines BTC have all sold out.

Nearly all the top bitcoin mining manufacturers worldwide that produce ASIC rigs seem to be out of stock for at least a few months. A few ASIC manufacturing competitors do have some lower terahash units available like the Chinese operation Strongu. The firm recently released the Strongu Hornbill H8 Pro (84Th/s) and the website does say “shipping within 1-week order confirmation.”

Of course, users can leverage secondary markets like Ebay or vendors that specialize in buying bulk ASICs to sell on the open market. As of right now, most of these units being sold by non-official bitcoin mining rig dealers carry a significant premium.

What do you think about manufacturers selling out of ASIC bitcoin miners and shipments being four months out? Let us know what you think about this subject in the comments section below.