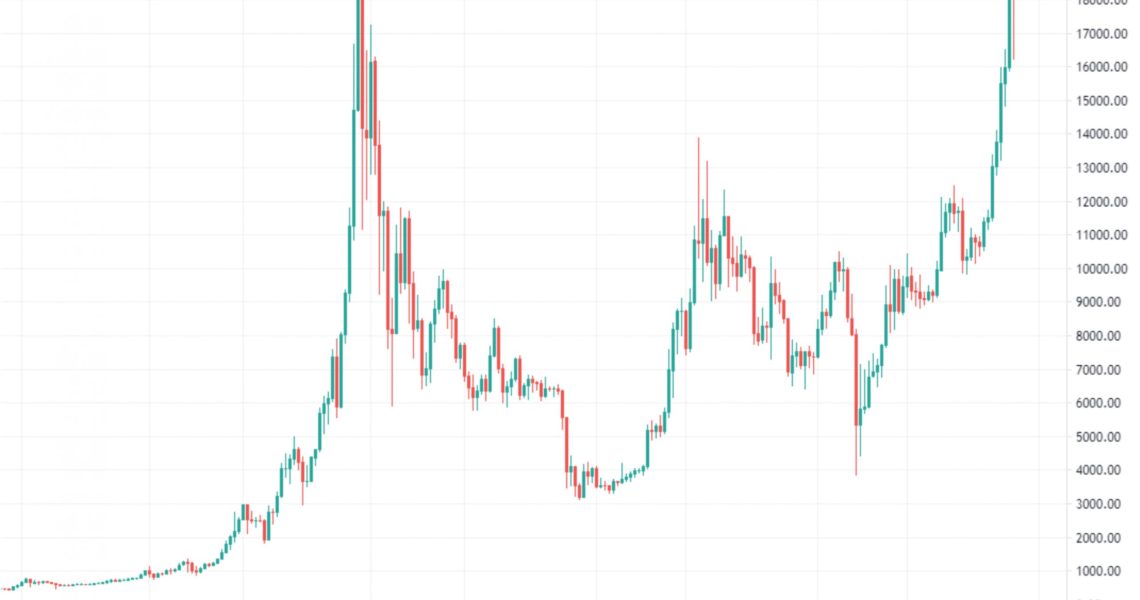 Market Watch by Fyookball: Price Is in a Tight Channel BTC is often a good macro indicator for the entire crypto market, so this is a good place to start. Bitcoin (BTC) has recently surpassed its all-time high price just shy of $20,000, so it’s a unique time to zoom out and look at the weekly chart for the past several years.

The last several weeks have been a rocket ride, and we’re now bumping up against the technical resistance level of $20,000. Amidst the bullish sentiment fueled by corporate investors such as MicroStrategy, this could appear as resistance that will soon break. The leg up from $11,000 was particularly strong, and this kind of move often has a second leg. So the market is looking quite bullish indeed.

Nevertheless, bears will also see shorting the $20,000 level as a trade. Typically, selling at resistance is a low probability (but good risk/reward) trade, as this kind of trade usually involves a tight stop. If the bulls fail to conquer the 21k handle, then price may slump. Aggressive bears will set stops there, hoping to see a sell off to $17,000 or more.

Zooming into the daily chart, price is in a tight channel. We’re seeing the straight up price action on a more detailed scale. You can see price consolidating recently as it encounters the $20,000 resistance level. Runaway trends are always hard to trade since putting on a big position after a big run-up in price is risky. One strategy is to put on a small position as soon as you know the trend is in play. You can then manage the trade and add on later at either higher or lower prices, and more information is made available to you by the market and other factors.

Steep trends are not very sustainable, and will have to correct at some point. If you buy, it is better to buy closer to the lower trendline of the channel. If there is an extreme overshoot to the high side and the market prints a full bear candle reversing down, it may be an opportune time to short the market, although this should be considered an advanced trade, as shorting in a bull market needs to be done very carefully.

Now let’s take a look at Bitcoin Cash. Since BCH is correlated to BTC in dollar terms, let’s look at the BCH:BTC chart.

Obviously, the trend has been down for many months. But is the ratio low enough now that we’ll see a bottom? Perhaps. There are signs indicating a decent chance. The daily chart above shows a steep channel that formed October through December, but is now broken to the upside by some strong candles.

For such a long bear trend, we would expect at least another push down and/or a retest of the recently broken channel. Price usually can’t retest a broken trendline that’s too steep. Still, price can’t seem to get near it now, and the candles are small.

The bears aren’t able to push the price down further so the ball is now in the bull’s court. Will they push the ratio up again? Things look poised for a possible reversal, but we have to assume the overall bear trend is still in play until the bulls prove otherwise.

Disclaimer: Readers should do their own due diligence before taking any actions related to the content. Bitcoin.com is not responsible, directly or indirectly, for any damage or loss caused or alleged to be caused by or in connection with the use of or reliance on any information in this article.

The post Market Watch by Fyookball: Price Is in a Tight Channel appeared first on Bitcoin News.