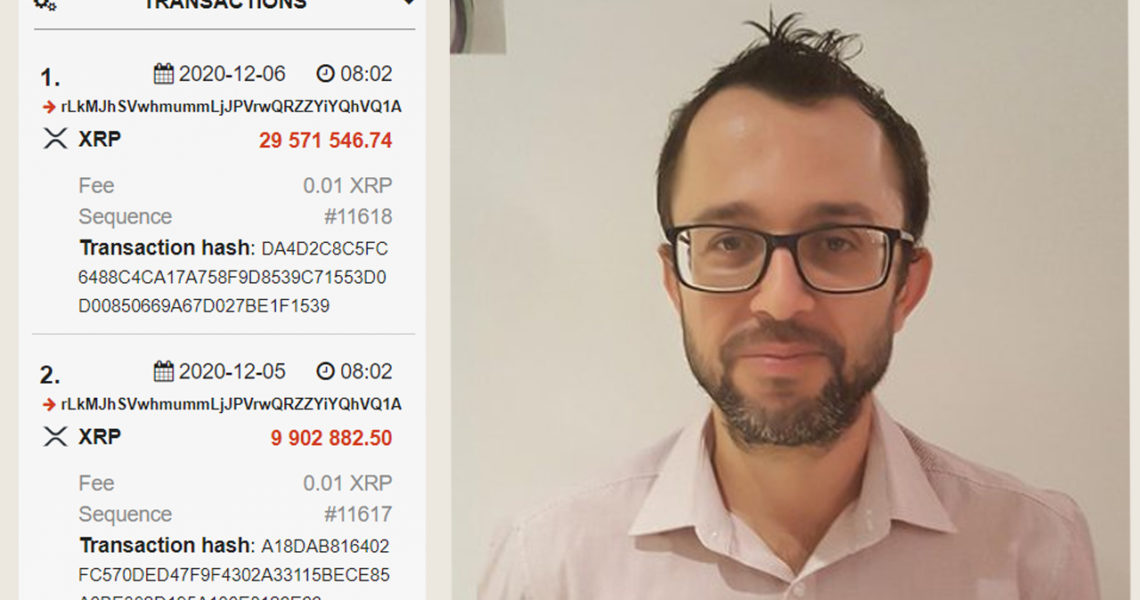 According to onchain data analytics researchers, one of the founders of the company Ripple, Jed McCaleb allegedly sold 29.5 million XRP in a single day. McCaleb, an early cryptocurrency investor, and self-made entrepreneur is one of the richest men on the planet.

There are a number of investors who happened to get into cryptocurrency at a very early time during the crypto economy’s history. The following editorial is the first of a series of articles that delve into some of the richest crypto investors worldwide. Jed McCaleb is an enigma and incredibly wealthy thanks to his early investments into the digital asset space, specifically when he cofounded the company Ripple.

He’s also been pegged as the 40th richest individual on the face of the planet. It is estimated that McCaleb owns more than $20 billion in digital assets and that’s just his XRP token ownership. Estimates also show that when McCaleb founded “Opencoin,” which was rebranded to Ripple, the founder held 9 billion XRP tokens.

Just recently, the researcher Leonidas Hadjiloizou shared data concerning McCaleb selling a massive quantity of XRP on December 6. On Sunday, December 6, 2020, XRP was swapping for $0.59 to $0.62 per token. That would make McCaleb’s sale worth over $17 million and prior to the dump, Hadjiloizou says that McCaleb has been selling increments of over 9 million XRP on a daily basis.

“After selling 9.9 million XRP per day for a week, Jed was able to sell 29.5 million XRP today,” Hadjiloizou tweeted on Sunday.

Another report published by the blockchain analytics provider, Whale Alert, last February indicates that in September 2019, researchers caught 100 million XRP flow from Ripple to McCaleb’s known wallet. Whale Alert said they managed to “track the sales of 1.05 billion XRP (almost exclusively through Bitstamp) between 2014 and 2019.

“At an average sale price of 0.129 cents per XRP, the total sale amount was $135 million USD,” the researchers added. However, not too long after the XRP post was published, Whale Alert updated the post with new numbers that they uncovered. The post says:

Update: We have calculated the sales of XRP by Jed McCaleb for 2020 up to August 3. During this period an additional 375 million XRP have been sold through his accounts for a total value of $75 million USD.

McCaleb’s history is much larger than creating Ripple, as the entrepreneur and programmer founded the infamous trading exchange Mt Gox and sold it to Mark Karpeles. He also served as the chief technical officer (CTO) for Ripple until 2013. Before Mt Gox, McCaleb was also well known for crafting the peer-to-peer Edonkey 2000 application.

Moreover, McCaleb also cofounded another digital currency network called Stellar with Joyce Kim. Stellar (XLM) is a fork of XRP and it is similar to the Ripple network. When the Stellar network first started it leveraged a Federated Byzantine Agreement (FBA), which was originally invoked by the Ripple network.

However, one of Stellar’s chief scientists, David Mazières switched XLM’s network over to the Stellar Consensus Protocol (SCP). The distributed ledger protocols’ Stellar and Ripple do not leverage proof-of-work (PoW) or proof-of-stake (PoW) consensus algorithms, as the networks depend on the use of validators. Today, there’s 21,761,065,319 stellar (XLM) in circulation and the coin is worth $0.16 per token, making it the 11th largest market capitalization according to statistics.

McCaleb is quieter than most proponents in the industry and typically keeps to himself these days. In 2017, he founded Lightyear.io, which later became known as the Interstellar payment system.

In addition to being named the 40th richest person by Forbes, in 2018 McCaleb was also awarded one of the top ten individuals who is leading the “blockchain revolution” by the New York Times. While perusing Google’s 204,000 results of articles about Jed McCaleb, one will find quite a lot of them are about him selling XRP.

The Ripple cofounder has also given a lot of XRP away over the years, as McCaleb is known for donating over $500,000 XRP to the Machine Intelligence Research Institute (MIRI). The donation from McCaleb was MIRI’s largest donation to-date. Further McCaleb also donated funds to the artificial intelligence research laboratory and the for-profit corporation Openai LP.

What do you think about Jed McCaleb’s recent 29 million XRP sale and the history behind the early investor? Let us know what you think about this subject in the comments section below.