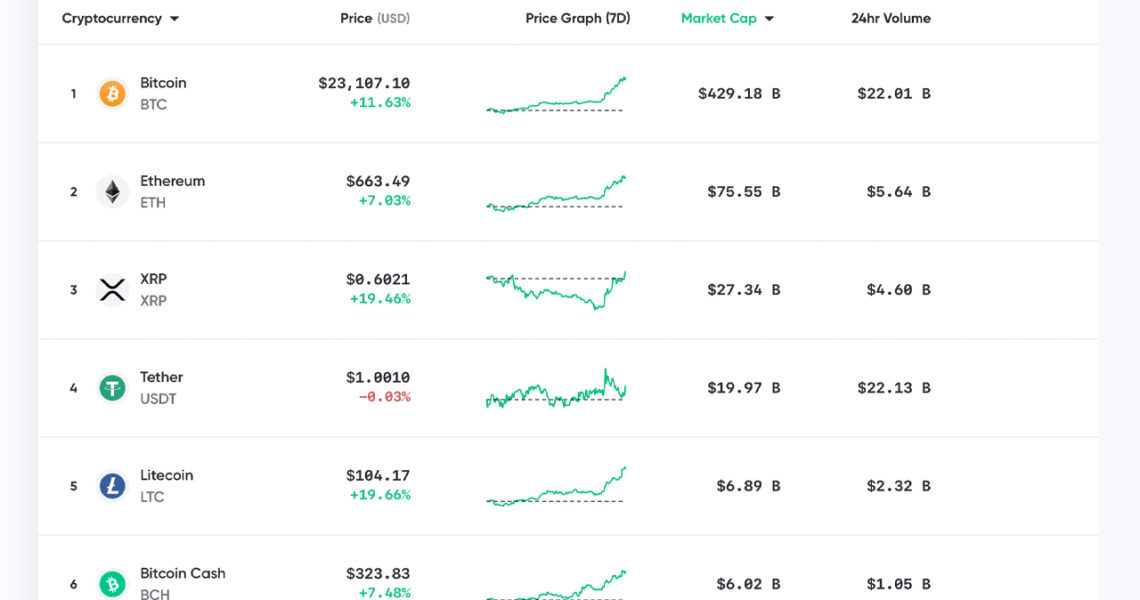 The crypto economy has gained a massive amount of value during the last few days, as the aggregate market cap of all 7,500+ digital assets is a whopping $640 billion on Thursday. Meanwhile, the largest blockchain in terms of valuation, bitcoin has touched an all-time high of $23,777 rising more than 22% in 24 hours.

Digital currency markets are doing extremely well this week, as a great number of coins have seen significant gains during the last three days. At $640 billion, the aggregate market cap of all the crypto assets in existence is up over 15% on Thursday. Bitcoin (BTC) recently touched a lifetime price high at $23,777 recorded on Bitstamp on December 17.

The price has dropped some since the all-time high (ATH) and BTC is currently trading at $23,107 per unit, up over 11% during the last 24 hours. BTC has a market valuation of around $429 billion today, which is 65% of the entire $640 billion crypto economy.

During the last day, ethereum (ETH) is up 7% and is trading for $663 per unit at the time of publication. That price gives ETH’s overall market capitalization a value of around $75 billion on Thursday. The third-largest market, held by XRP has gained more than 19% in the last 24 hours and each XRP is swapping for $0.60.

Similar to XRP, litecoin (LTC) has also seen double-digit gains jumping over 19% in the last day. LTC is trading for $104 per token and has a market cap of around $6.8 billion. In the sixth position, behind LTC is bitcoin cash (BCH) which is trading for $323 per unit. BCH has an overall market valuation of around $6 billion at press time.

Overall, many crypto supporters are extremely bullish and exuberant about the crypto price rises. However, not everyone is so enthused and the acclaimed Canadian economist, David Rosenberg, recently said bitcoin (BTC) is massively overvalued.

“Bitcoin is a massive bubble,” Rosenberg stated during an interview with Tom Keene. “The one thing we know about gold, we know the supply curve of gold with certainty. We don’t know the future supply curve of BTC, people think they know but they don’t really know.”

Paolo Ardoino, CTO of Bitfinex disagrees and noted that critics should take heed of what is being built today.

“Bitcoin’s ascent above US$20,000 is yet another milestone in what has been an epic year for crypto,” Ardoino told news.Bitcoin.com. “But the main story is not about speculation or trading. Bitcoin represents a monumental technological shift, the consequences of which are only just beginning to be seen. Critics should take heed of the quiet dedication of those building layers upon this technology that will change the very nature of money by the end of this decade,” Ardoino added.

Many other bitcoin believers believe the price is really just warming up. Onchain analyst Willy Woo told his 176,000 Twitter followers that BTC prices at $100k is a “ridiculously low” target.

“We are not at the all-time-high juncture where the BTC Top Cap Model starts curving upwards,” Woo tweeted. “Let’s see how high she runs in 2021. $100k is a ridiculously low target at the current trajectory. $55k is the next landmark -> Bitcoin becomes a $1T macro asset bucket,” the analyst added.

The founder and CEO of Zumo, a UK-based crypto wallet and exchange platform, Nick Jones, said that the crypto economy is a safe bet for investors.

“The boom in cryptocurrencies goes beyond institutional investors and financial houses,” Jones explained on Thursday. “As governments look to shore up their economies with cash injections, everyday investors are looking to assets like bitcoin which is influenced by their trading activity and not a government’s. If the pound is devaluing, cryptocurrency looks like a safer bet and investors can see the reward.”

Of course, Peter Schiff, the infamous gold bug who loves to trash bitcoin and the crypto economy had something negative to say when BTC reached an ATH on December 16.

“Most likely Microstrategy will not buy $650 million worth of bitcoin in the market,” Schiff said. It can easily find whales willing to unload large blocks of Bitcoin above $20K in private transactions. That means all the minnows may be front running a trade that never actually takes place,” he added.

Meanwhile, after Schiff tweeted the dig at Microstrategy, claiming the firm would sell at $20k, the price jumped over $3,000 higher to the gold bug’s dismay.