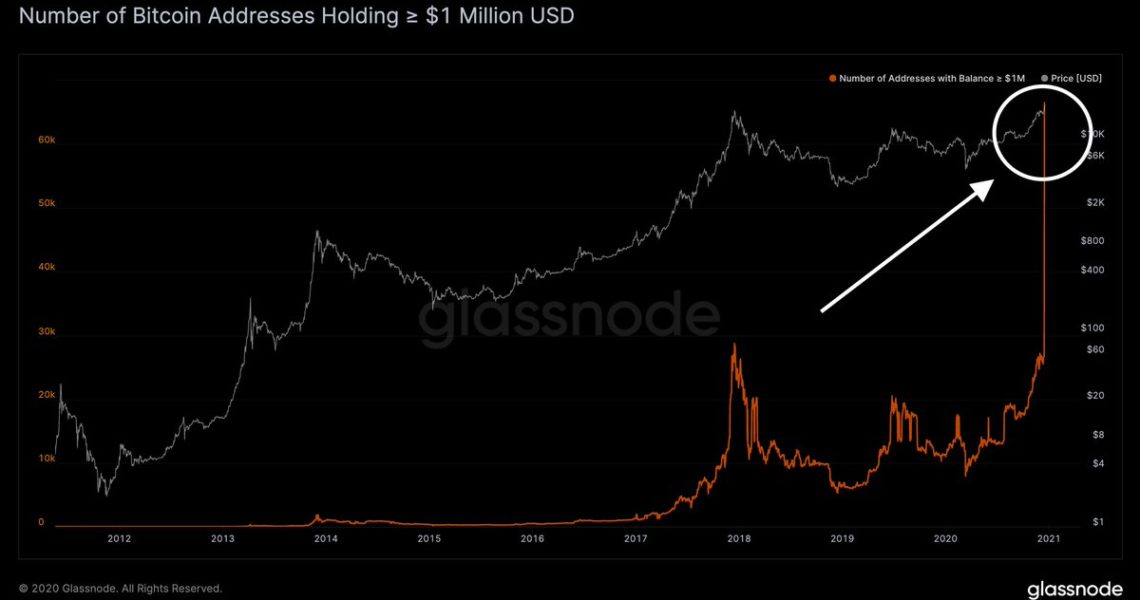 While bitcoin trades above the $20k handle, onchain data shows that the number of bitcoin addresses holding at least $1 million has climbed substantially increasing by more than 150%. Moreover, Glassnode’s statistics indicate that roughly 1.85 million bitcoin hasn’t moved in over a decade.

At the time of publication, bitcoin (BTC) is hovering just below the $23k handle as the price touched an all-time high at $23,777 the other day. Onchain data shows that the infamous bitcoin rich list has grown a great deal this week.

On December 17, 2020, researchers from Glassnode tweeted about the “number of bitcoin addresses holding at least $1M USD” and said the metric “has gone parabolic.”

At current exchange rates, a person needs close to 44 BTC to be a millionaire. Stats from the top 100 richest bitcoin address list from bitinfocharts.com shows that addresses with 10-100 BTC equals 138,068 addresses, which means a bit more than 71,000 bitcoin addresses are not millionaire accounts. Then there are 13,835 bitcoin (BTC) addresses with either $2.2 million (100 BTC) or $22.7 million (1,000 BTC), according to today’s stats.

In addition to the millionaire addresses growing, Glassnode data that shows bitcoin’s total supply and coins that were last active in over ten years. The data indicates that 10% or 1.85 million BTC out of the 18.5 million in circulation, hasn’t moved in over a decade.

The coins could be old school holders who are waiting for much higher prices. Many of the coins could be lost and Satoshi Nakamoto’s infamous stash hasn’t moved in ten years either. Although, out of the 1.85 million sitting for ten years or more, “1.78 million bitcoins have never left their miner address,” says Glassnode.

“That is 9.5% of the circulating bitcoin supply,” the onchain researchers tweeted on Friday. “Our analysis shows that 98% of those coins were mined more than 7 years ago, and 94% more than 10 years ago. Most could be lost forever.”

There is only one bitcoin address in existence today, with between 100,000 to 1 million coins and the address has 141,452 BTC worth over $3 billion using today’s exchange rates.