Tesla and Spacex CEO Elon Musk made a series of tweets about bitcoin on Sunday. One of them concerns whether it is possible to buy bitcoin in “large transactions,” particularly for Tesla to convert its U.S. dollar reserves into bitcoin. Microstrategy’s CEO told Musk that this move would be “a $100 billion favor” to Tesla’s shareholders that would grow into a “$1 trillion favor.”

Elon Musk tweeted about bitcoin several times on Sunday, starting with “Bitcoin is my safe word,” making the same joke he previously made on several occasions. This time he followed up with “Just kidding, who needs a safe word anyway?” His initial tweet garnered over 6.1k comments at the time of writing. It had been retweeted more than 21.1k times and liked 210.1k times.

A few hours later, Musk tweeted about bitcoin and dogecoin. One tweet reads: “Bitcoin is almost as bs as fiat money,” which many commenters have taken as a welcome insult to government money, particularly the U.S. dollar. Another tweet says: “One word: Doge.”

Musk also replied to a bitcoin price prediction made by Twitter user Mark Calloway. “I predict a crash, I also predict it will reach $50k in [the] next five years,” he wrote. The Tesla CEO replied, “Sounds about right.” 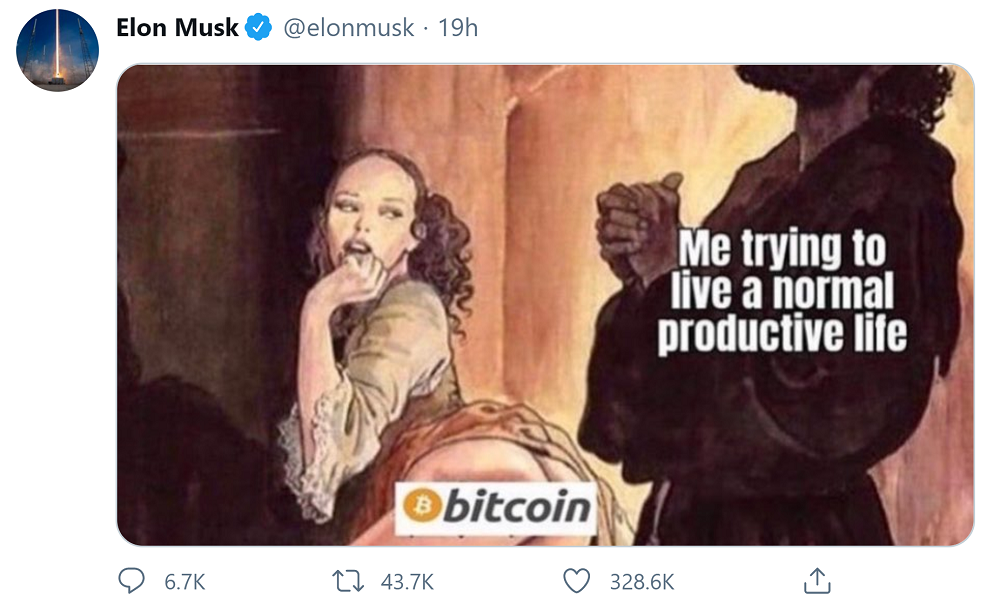 The Microstrategy CEO told Musk: “If you want to do your shareholders a $100 billion favor, convert the $TSLA balance sheet from USD to BTC. Other firms on the S&P 500 would follow your lead & in time it would grow to become a $1 trillion favor.” Musk responded to Saylor:

Are such large transactions even possible?

Saylor answered: “Yes. I have purchased over $1.3 billion in BTC in past months & would be happy to share my playbook with you offline – from one rocket scientist to another.” A number of others chimed in to answer Musk’s question, including Binance CEO Changpeng Zhao, who recommended his own exchange to Musk. “Probably not a good idea to do it in one transaction, but can definitely be done,” he noted.

Musk’s bitcoin question has sparked much speculation on social media that the Spacex CEO might soon buy a large amount of bitcoin, possibly through his company Tesla. However, some people believe that Musk was not serious about buying bitcoin with Tesla’s money. Gold bug Peter Schiff, for example, opined: “It seems like Elon Musk was only joking about exposing Tesla shareholders to bitcoin. So I don’t need to convince the board not to turn Tesla into a double bubble.”

Tesla will officially become an S&P 500 constituent at Monday’s open with a 1.69% weighting in the index, which is the fifth-largest.

Prior to Sunday, Musk has tweeted about bitcoin on a number of occasions. The Tesla CEO confirmed in May, “I still only own 0.25 bitcoins,” after replying to Harry Potter author J.K. Rowling about how “massive currency issuance by govt central banks is making bitcoin internet money look solid by comparison.” The small amount of BTC Musk owns was given to him several years ago by a friend, he explained in February last year, noting that he did not have any other crypto holdings.

In February, he addressed the rising number of scams leveraging bitcoin and other cryptocurrencies. Many of them used his name to promote their bitcoin giveaway schemes, raking in millions of dollars. The concerned Musk tweeted: “The crypto scam level on Twitter is reaching new levels. This is not cool.” In November, he responded to Game of Thrones actress Maisie Williams asking on Twitter if she should buy bitcoin with “Toss a bitcoin to ur Witcher.”

Musk also tweeted about cryptocurrency several times last year last, such as “Whoever owns the early BTC deserves a Nobel prize in delayed gratification.” Besides bitcoin, the Tesla CEO has also tweeted about dogecoin a number of times over the years. To this day, his Twitter profile still displays: “Former CEO of Dogecoin.”

Do you think Elon Musk’s Tesla will soon invest substantially in bitcoin? Let us know in the comments section below.