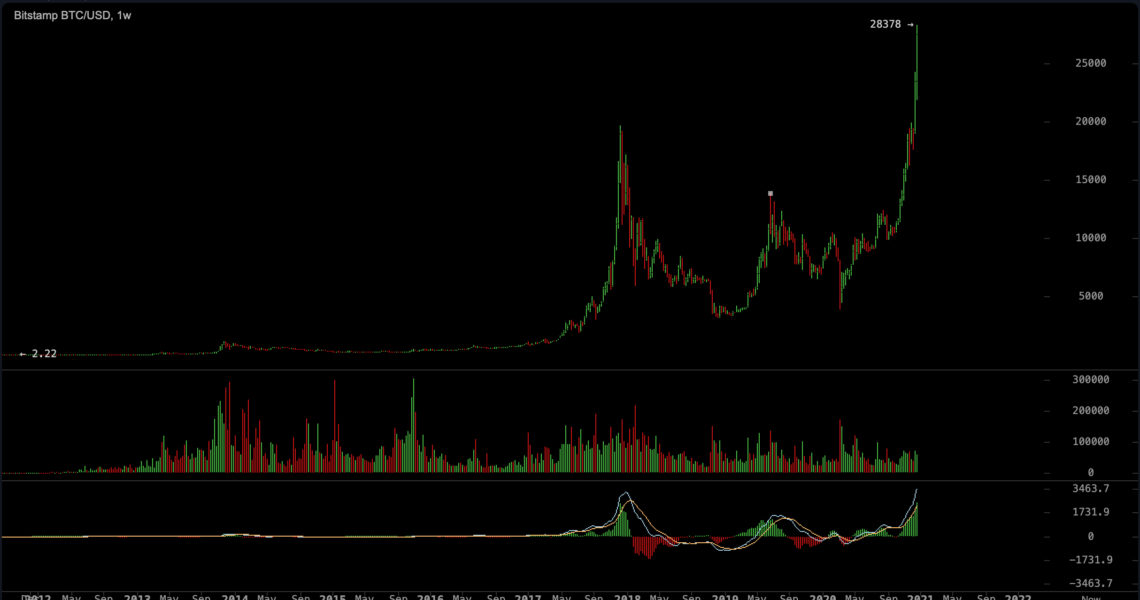 Bitcoin markets have been seeing a lot of action this weekend, as the price of the crypto asset touched another all-time high (ATH) at $28,378 per coin. Toward the end of 2020, the cryptocurrency’s market capitalization has crossed a whopping half of a trillion U.S. dollars in value.

The leading cryptocurrency by market valuation, bitcoin (BTC), has climbed immensely in value during the last few days. At the time of publication, the asset is trading between $27,250 to $27,750 per BTC on Sunday morning (8-9:30 a.m. EST).

A few days ago, on December 24, BTC was swapping for $23,796 per unit, which means it has gained over 14% during the last three days. Data from markets.Bitcoin.com show that the BTC dominance index has surpassed the 70% handle with an overall market cap of $510 billion today.

Using today’s exchange rate, BTC’s current difficulty, and an electrical cost of around $0.06 per kilowatt-hour (kWh) shows that miners are profiting considerably at this price range. Stats show that the top mining rig today is the Bitmain Antminer S19 Pro (110TH/s) which is pulling in $15.37 per day.

Currently, the Bitcoin network hashrate is 136 exahash per second, and there’s a total of 18 pools mining the BTC chain. The top five BTC mining pools include F2pool, Binance Pool, Antpool, Btc.com, and Viabtc. F2pool commands 20% of the hashrate or 26.32 EH/s on December 27, 2020.

Bitcoin is also seeing a lot of interest during the last few weeks as Google trends data shows the term “bitcoin” has a rating of 96 out of 100. The term and subject “bitcoin” is also trending quite a bit on Twitter on Sunday morning with over 225,000 tweets about the crypto asset.

Lots of individuals have been discussing how BTC surpassed Visa’s market capitalization and is steadily gaining on Berkshire Hathaway. In fact, bitcoin’s (BTC) overall valuation makes it the 11th most valuable global asset, in contrast to the top ten corporations worldwide.

“Bitcoin market capitalisation is now over $510 billion. Which puts it just under Warren Buffett’s Berkshire Hathaway, the 10th largest company in the world,” one individual tweeted on Sunday.