Alongside today’s CES-centric announcement of their new GeForce RTX 30 series parts for laptops, NVIDIA also offered an in-depth reveal of their next desktop graphics card, the GeForce RTX 3060. Reflected the continued progression of the Ampere architecture into smaller and cheaper video cards as NVIDIA continues its product stack rollout, the RTX 3060 marks the introduction of Ampere into their popular mainstream-enthusiast 60-series video card tier. Long the backbone of NVIDIA’s desktop sales in North America and elsewhere, the 60-tier cards typically strike a solid balance between price and performance. And with prices set to start at $329, at launch the RTX 3060 will become the cheapest RTX card that NVIDIA has ever offered.

Once it’s launched next month, the GeForce RTX 3060 will mark the next step in the progression of NVIDIA’s Ampere-based desktop cards. Though the company already launched the GeForce RTX 3060 Ti last month – using a cut-down GA104 GPU – the RTX 3060 is the real McCoy in terms of being a 60-tier card. It’ll be the cheapest that NVIDIA has ever launched an RTX series card, and it will be the card that they hope will entice owners of GTX 1060 series cards, one of NVIDIA’s most successful card series of all times, to finally upgrade to an RTX card.

The release of the RTX 3060 comes on the heels of what was a fragmented product lineup in the last generation. Owing in large part to the significant die space requirements for NVIDIA’s RTX family of features – ray tracing, tensor cores, etc – NVIDIA bifurcated their lineup at the 60 level. At $349 we had the RTX 2060, which was a decent card, but not especially impressive on a price/performance basis. Alternative, the GTX 1660 series of cards offered much better pricing for only a small drop in performance, but these cards lacked the hardware RTX features that are now becoming a baseline as part of the DirectX 12 Ultimate specification.

As a result, NVIDIA is undertaking a reintegration of sorts with its GeForce lineup. While we don’t have any direct visibility into what comes after the RTX 3060, the smaller die sizes afforded by Samsung’s 8nm process mean that NVIDIA isn’t facing the same pressure to bifurcate. So for the moment, at least, the RTX 3060 is taking the mantle as the true successor to NVIDIA’s 60-tier of video cards. And with that comes the need to please both performance and budget enthusiasts, a tall order for a card that is set to start at $329.

At this point I’m still chasing down more detailed product specifications from NVIDIA, as the press material they’ve published so far isn’t entirely comprehensive. But at a high level, it looks like the GeForce RTX 3060 is based on a new NVIDIA GPU, which following NVIDIA’s usual product cascade would be GA106. It does not appear that this is a fully-enabled GA106 part – the RTX 3060 Laptop GPU offers slightly better specs – but for the moment we don’t know what a fully-enabled GA106 might look like.

In any case, the RTX 3060 as it’s shipping will come with 28 SMs enabled, for a total of 3584 FP32 CUDA cores. Everything else in Ampere should be in proportion to NVIDIA’s usual layout, so this means there will also be 112 TMUs, 112 tensor cores, and 28 RT cores. Meanwhile, as NVIDIA has bound the number of ROPs to the SMs (or rather, the GPCs that encompass them), it’s not clear right now how many ROPs the card will offer, but 64 or a good fraction thereof is a good bet at this point. The card itself will ship with a base clockspeed of 1.32GHz, and a rated boost clock of 1.78GHz.

On paper, this means the RTX 3060 will offer around 80% of the RTX 3060 Ti’s shader and texture performance, with the card’s relatively high boost clock helping to make up for the overall lack of SMs. Meanwhile the impact to ROP performance remains to be seen.

On the memory side of matters, GA106 introduces a smaller 192-bit memory bus, which is comprised of six 32-bit memory controllers. This is standard fare for 60-tier cards, and does come with some trade-offs, mainly in terms of memory capacity. At three-quarters the size of the bus on the likes of the RTX 3070, NVIDIA normally opts to include three-quarters the memory, which would have been 6GB. However as a 6GB card is looking kind of long in the tooth when game consoles have 16GB of total memory, likely impacting the card’s long-term performance prospects, NVIDIA has decided to finally bite the bullet and make the jump to 12GB of VRAM on their mid-tier video cards. The net result is that there’s currently an odd progression/regression in the GeForce RTX 30 lineup – going from 12GB down to 8GB and then back up to 10GB on the RTX 3080 – but at the end of the day it ensures the RTX 3060 ships with enough VRAM to be useful for years to come.

On this memory bus NVIDIA is placing GDDR6 memory, which is what they’ve done for all of the cards below the RTX 3080. NVIDIA’s official specifications don’t spell out what speed grade of GDDR6 is being used here, but going by the many (many) vendor RTX 3060 card announcements in my inbox, I’ve seen cards with memory as slow as 14Gbps GDDR6, which is consistent with what NVIDIA did for the RTX 3060 Ti as well. In that case, it gives the RTX 3060 a total memory bandwidth of 336GB/second.

With lower performance and memory amounts, TDP is also dropping accordingly relative to the higher-end RTX 30 series cards. NVIDIA is rating the RTX 3060 at 170 Watts, which is 30W below the RTX 3060 Ti, and making this the first RTX 30 series card with a sub-200W TDP. However, much like the other RTX 30 series cards, TDPs are rising on a generational basis. Whereas the GTX 1060 was a 120W card and the RTX 2060 a 160W card, RTX 3070’s 170W TDP is a further 10W higher. If nothing else, this is consistent with what NVIIDA has done with this entire generation of cards.

While NVIDIA has kept things relatively low key for today’s unveil since the card is still several weeks from shipping, there hasn’t been any word from NVIDIA that they’ll be shipping a Founders Edition of the card. So the RTX 3060 looks to be the first Ampere card that’s getting a purely virtual hardware launch, with NVIDIA’s AIB partners providing custom designs right out of the gate.

Consequently, specific power figures and display I/O options look like they’ll vary some. But at the end of the day, most cards should offer 3 DisplayPorts and an HDMI part, or a similar configuration. Meanwhile, expect to see plenty of factory overclocked cards, as AIB vendors will look to further stratify their RTX 3060 cards into multiple tiers between $329 and the $399 RTX 3060 Ti.

The sole slide of partner cards that NVIDIA has posted says a lot of what to expect from partner card designs: lots and lots of dual and triple fan open air coolers. For better or worse, this is the tried and true cooler method for mid-range cards, and the board partners are apt to recycle proven designs – especially if they’re pin-compatible. 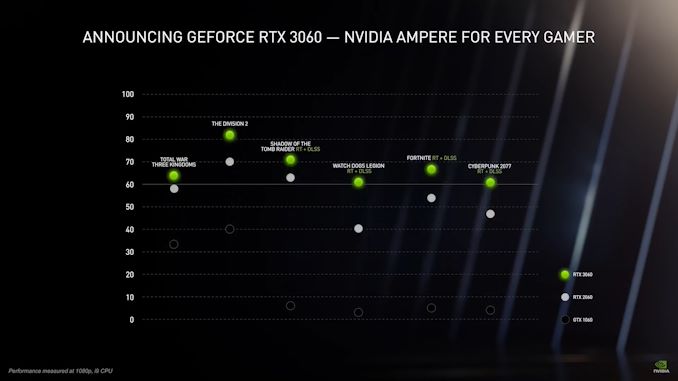 As always, NVIDIA is targeting an N + 2 upgrade cycle with these latest cards, meaning that the company is particularly pitching them as an upgrade for Pascal (GTX 10 series) owners. Along with the significant feature differences afforded by two generations of improvements – things like RT cores and tensor cores, HDMI 2.1 ports and AV1 decoders – there should also be a sizable performance advantage for the newer cards. Though for NVIDIA’s own figures they’ve opted to focus in part on features, only posting a couple of benchmark results without DLSS/RT enabled. Still, the roughly 2x performance gain is right around what we’d expect over the GTX 1060, given what we’ve seen from the earlier Ampere cards.

The bigger challenge for NVIDIA is likely to be enticing those Pascal owners to upgrade in light of the higher prices that all of the RTX cards over the last two generations have fetched. The baseline GTX 1060 6GB hit the market at $249 a bit over 4 years ago, so $329 for its Ampere-based successor is a stiff price increase. Mind you, all of the RTX 30 series cards have faced a similar challenge, but it’s really once we get to 60-tier cards that NVIDIA’s regular customer base becomes increasingly focused on perf-per-dollar.

Pragmatically speaking, given what we’ve seen over the last few months, NVIDIA shouldn’t have too much trouble there. The RTX 3060 Ti flew off the shelves at $399, and as it’s even cheaper, the RTX 3060 will probably fly off the shelves even faster. In fact, keeping the card on shelves (and at MSRPs) is likely to be NVIDIA’s biggest problem for the next quarter. Computer hardware shortages remain a fact of life across the industry, and that’s especially the case for the latest-generation video cards. With plenty of gamers looking to upgrade, and the specter of cryptocurrency mining overshadowing the entire GPU landscape, fast GPUs remain hard to come by. Which for NVIDIA and its partners mean they’ll be able to move everything they can make, but it means gamers will want to remain on their toes if they hope to get a video card.

The GeForce RTX 3060 will be launching in late February. We’ll have more news as NVIDIA sets a release date and its partners announce the rest of their RTX 3060 series launch cards.