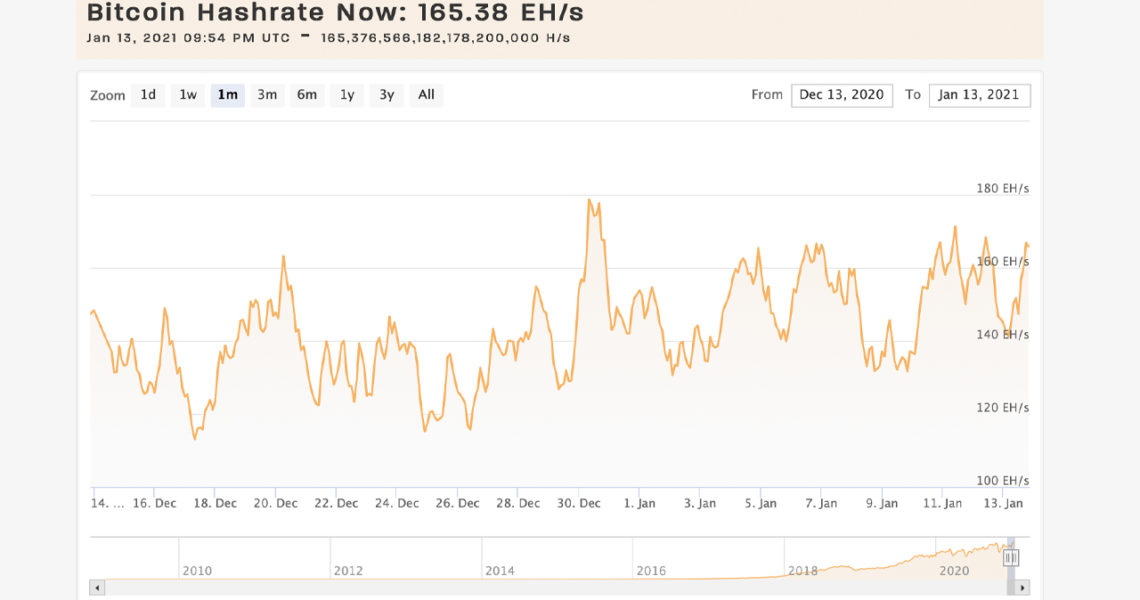 The Bitcoin network’s hashrate has been operating at very high processing speeds during the last few weeks, as the overall hashrate touched a whopping 171.2 exahash per second (EH/s) on Monday. Moreover, the network’s mining difficulty has also touched an all-time high (ATH) at 20.61 trillion, the highest difficulty the network has ever experienced in the last 12 years.

One aspect of the Bitcoin (BTC) network that people look at to measure the protocol’s overall health and growth is the hashrate. At the time of publication, the BTC hashrate is processing at speeds of around 165.38 EH/s and the miner’s collective hashpower has been nearing all-time highs again. For instance, on December 30, 2020, the network hashrate spiked to a colossal 178.6 EH/s and 12 days later the hashrate hit 171.2 EH/s.

Because the hashrate is so high entering the second week of January 2021, the Bitcoin network’s difficulty will increase +9.98% or 22.66T, another ATH in less than two weeks. This will take place in roughly nine days from now, give or take, depending on the average output of blocks per day.

With a block reward found every ten minutes or so, the Bitcoin block inflation rate per annum is only 1.78% during the first month of 2021. So far, even with this week’s BTC price drop miners are still profiting a great deal by dedicating hashrate to the chain. Statistics show at even $0.12 per kilowatt-hour (kWh) more than 200 application-specific integrated circuit (ASIC) devices that process the SHA256 algorithm are profiting today.

Bitcoin proponents are quite confident with the overall hashrate and security of the cryptocurrency network. In a thread about BTC confidence, the bitcoiner Pierre Rochard explained that if people are “confident about Bitcoin’s fundamentals, then the exchange rate volatility is just— a joyful melody.”

Confidence in being able to send bitcoin. Bitcoin’s global peer-to-peer network of nodes and the massive mining hashrate ensure that your bitcoin gets to where you are sending them without foreign interference.

Meanwhile, a number of dominant cryptocurrency exchanges are joining the mining industry. On Wednesday, the reporter Colin Wu (@Wublockchain) discussed how Huobi is entering the mining economy. “China’s largest exchange Huobi is about to start the sale of BTC mining machines,” Wu said.

“Investors can purchase machines + custody services. The lock-in period is two years. Chinese exchanges are entering the mining field more. The Binance mining pool, which was launched in 2020, once ranked second in the total BTC network, surpassing a large number of traditional mining pools,” the finance reporter from China added.