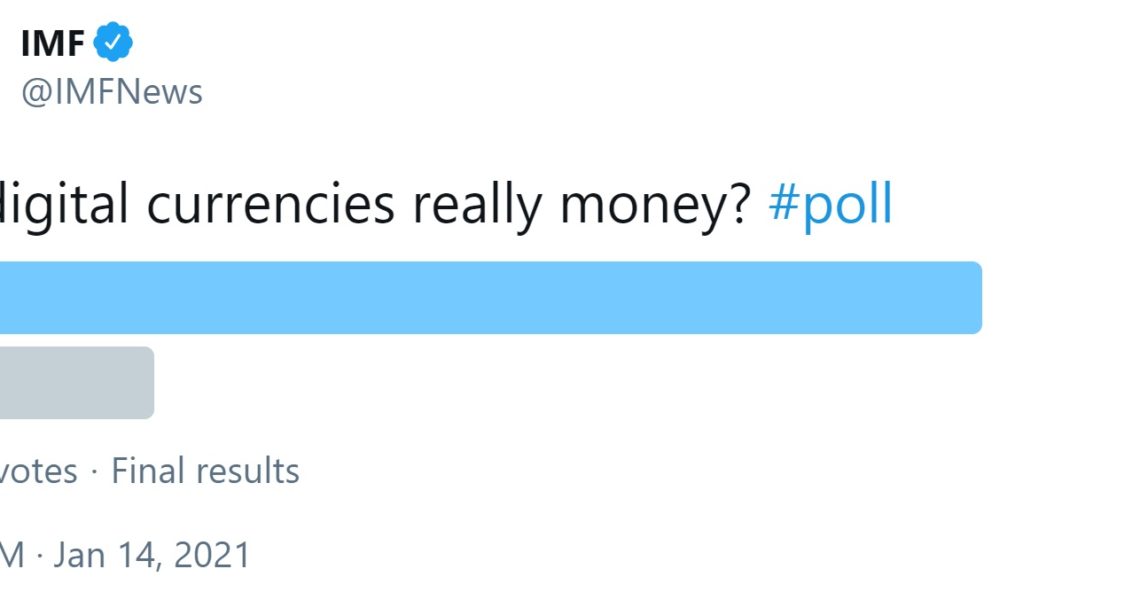 The IMF published a blog post on Thursday exploring whether digital money is really money in the legal sense. The post is authored by Catalina Margulis, a consulting counsel in the IMF Legal Department’s Financial and Fiscal Law unit, and Arthur Rossi, a research officer in the same unit.

Expressing their own views, the authors began by observing that “close to 80 percent of the world’s central banks are either not allowed to issue a digital currency under their existing laws, or the legal framework is not clear.” They continued:

To help countries make this assessment, we reviewed the central bank laws of 174 IMF members … and found out that only about 40 are legally allowed to issue digital currencies. Prior to the publication of this blog post, the IMF set up a poll on Twitter asking people to vote on whether they think digital currencies are really money. Out of 95,256 votes collected, 79.9% said yes.

What Qualifies as Currency

The IMF researchers noted that “To legally qualify as currency, a means of payment must be considered as such by the country’s laws and be denominated in its official monetary unit. A currency typically enjoys legal tender status, meaning debtors can pay their obligations by transferring it to creditors.” They detailed:

Therefore, legal tender status is usually only given to means of payment that can be easily received and used by the majority of the population. That is why banknotes and coins are the most common form of currency.

The authors noted that to “use digital currencies, digital infrastructure — laptops, smartphones, connectivity — must first be in place.” However, they pointed out that “governments cannot impose on their citizens to have it, so granting legal tender status to a central bank digital instrument might be challenging.”

In conclusion, while noting that “Without the legal tender designation, achieving full currency status could be equally challenging,” the researchers emphasized:

Many means of payments widely used in advanced economies are neither legal tender nor currency.

Do you think digital currencies are money? Let us know in the comments section below.