As part of its CES 2021 announcements, Intel officially unveiled a number of NUCs based on their Tiger Lake SoCs. Intel’s initial NUCs were all based on 100mm x 100mm (4in x 4in) boards, kickstarting the UCFF craze that contributed to revitalizing the PC market. Over the last few years, we have seen Intel expand the NUC to encompass multiple other form-factors, while keeping compactness in mind:

The Panther Canyon NUCs are the Tiger Lake-based “Performance-class” units, with eleven different SKUs based on three different boards.

All the models operate the Tiger Lake processors (Core i7-1165G7, Core i5-1135G7, or the Core i3-1115G4) with a TDP of 28W. The K and H kits are the usual ones we have seen in previous generations – the latter has support for the installation of a 2.5″ drive. Panther Canyon also has a Q SKU that adds a wireless charging lid (up to 15W) on top of the H chassis. The specifications are summarized in the table below.

Intel’s technical product specifications provide additional details on the I/Os. We see the front and rear Thunderbolt ports (curiously, marketed as Thunderbolt 3 instead of Thunderbolt 4) are enabled directly from the TGL-U processor. Two display outputs (DP 1.4a) are also routed through these Thunderbolt ports within the processor itself. 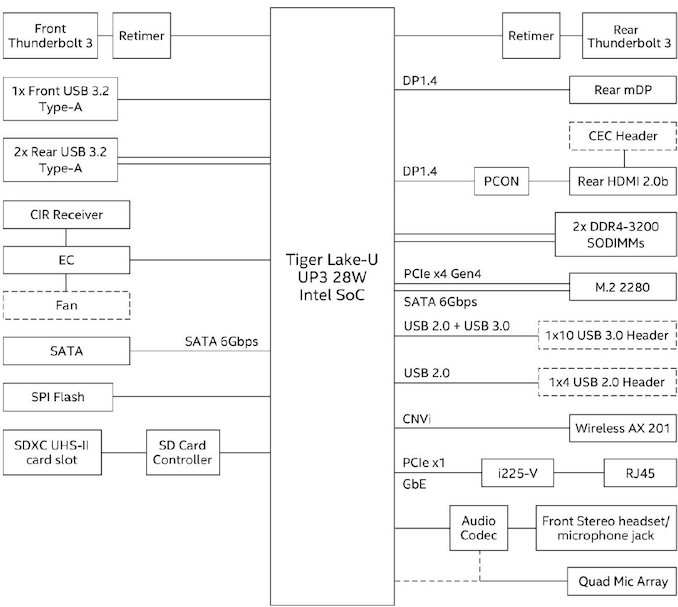 Interestingly, a protocol converter is still needed on the board to convert the DP 1.4a display output to HDMI 2.0b. There is a PCIe 4.0 x4 lanes set for attaching a NVMe SSD. The high-speed I/O lanes are multiplexed with a SATA port allowing the installation of a M.2 SATA SSD in the same slot. The LAN port is enabled by the i225-V 2.5 Gbps controller, while the SDXC card slot on the side requires an additional SDXC bridge chip. The Wi-Fi 6 capabilities are enabled by the soldered Intel AX201 CNVi card.

Panther Canyon looks to be a solid upgrade over the Frost Canyon NUC despite the loss of a couple of cores (the Frost Canyon NUC was a hexa-core affair), thanks to the improved CPU microarchitecture and a host of system-level upgrades. On the latter front, we have an additional Thunderbolt port, a 2.5 Gbps LAN port (compared to the regular Gigabit port in the Frost Canyon NUC), ability to install a PCIe 4.0 NVMe SSD, and the ability to drive up to four 4Kp60 displays. Additionally, we also some of the Panther Canyon SKUs sporting a 15W wireless charging lid.

Various reseller listings have come up for the Panther Canyon NUCs in Europe. However, Intel has not provided a concrete launch date or pricing details for any of the SKUs yet.