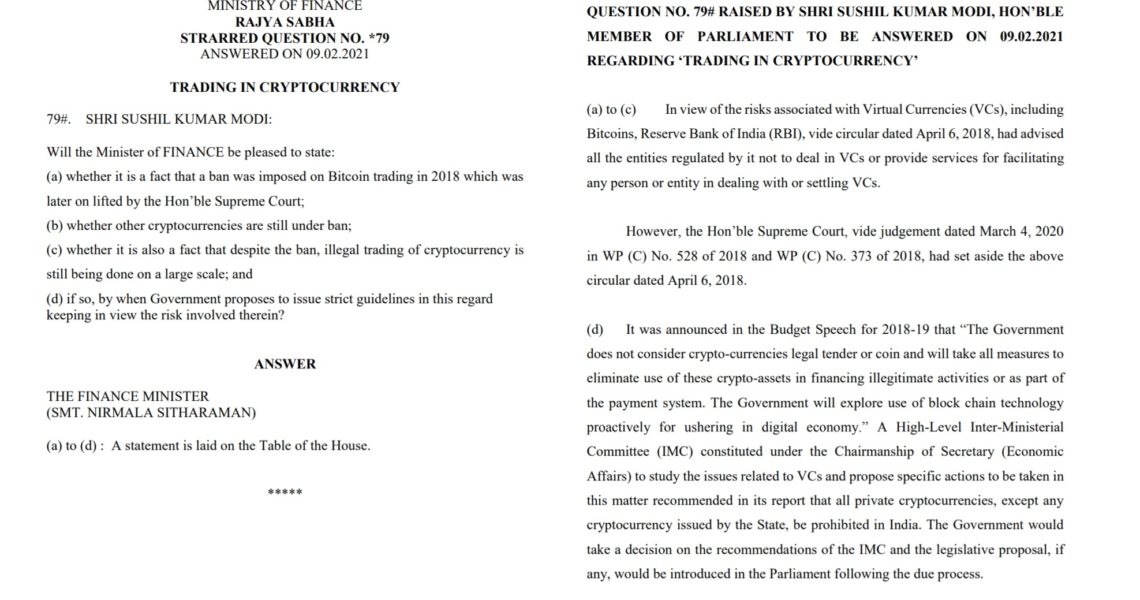 India’s Finance Minister Nirmala Sitharaman has answered some questions regarding cryptocurrency in Rajya Sabha, the upper house of India’s parliament. The questions include measures the government plans to impose on the crypto industry.

The Indian finance minister answered four questions Tuesday in Rajya Sabha regarding the “trading in cryptocurrency,” including measures outlined in the crypto bill.

Minister Sushil Kumar Modi asked the minister of finance whether “a ban was imposed on bitcoin trading in 2018,” which was later lifted by the supreme court, whether other cryptocurrencies are still banned, and whether “despite the ban, illegal trading of cryptocurrency is still being done on a large scale.”

To these questions, Finance Minister Nirmala Sitharaman replied: “In view of the risks associated with virtual currencies (VCs), including bitcoins, Reserve Bank of India (RBI), vide circular dated April 6, 2018, had advised all the entities regulated by it not to deal in VCs or provide services for facilitating any person or entity in dealing with or settling VCs.” She confirmed:

However, the honorable supreme court, vide judgment dated March 4, 2020 … had set aside the above circular dated April 6, 2018.

The last question reads, “By when government proposes to issue strict guidelines in this regard keeping in view the risk involved therein?” The finance minister proceeded to provide a long answer, similar to the first part of one of the answers provided last week by Minister of State for Finance Anurag Thakur.

Quoting the Budget Speech of 2018-2019, Sitharaman said: “The government does not consider cryptocurrencies legal tender or coin and will take all measures to eliminate use of these crypto assets in financing illegitimate activities or as part of the payment system. The government will explore use of blockchain technology proactively for ushering in digital economy.’”

She proceeded to talk about the recommendations by “A high-level interministerial committee (IMC) constituted under the chairmanship of Secretary (Economic Affairs) to study the issues related to VCs and propose specific actions to be taken in this matter.” This committee was headed by Subhash Chandra Garg who has resigned from government. The finance minister said that the committee “recommended in its report that all private cryptocurrencies, except any cryptocurrency issued by the state, shall be prohibited in India,” adding:

The government will take a decision on the recommendations of the IMC and the legislative proposal, if any, would be introduced in the parliament following the due process.

The Indian government has answered a few more questions about cryptocurrency and any measures it plans to impose on the industry since it listed the bill to be introduced in Lok Sabha, the lower house of India’s parliament. The bill seeks to ban cryptocurrencies while providing a regulatory framework for the digital rupee to be issued by the central bank, the RBI.

However, the bill has not been made public, leading to much confusion about the status of the bill and what prohibitions it will entail. Some suspect that it may closely resemble the one submitted by the Garg committee.

Last week, Minister of State for Finance Anurag Thakur answered questions in Rajya Sabha regarding the government’s stance on cryptocurrency and the digital rupee. Then, on Tuesday, he answered more crypto questions and confirmed that the crypto bill is being finalized and will soon be sent to the cabinet.

What do you think about what the finance minister said about cryptocurrency? Let us know in the comments section below.