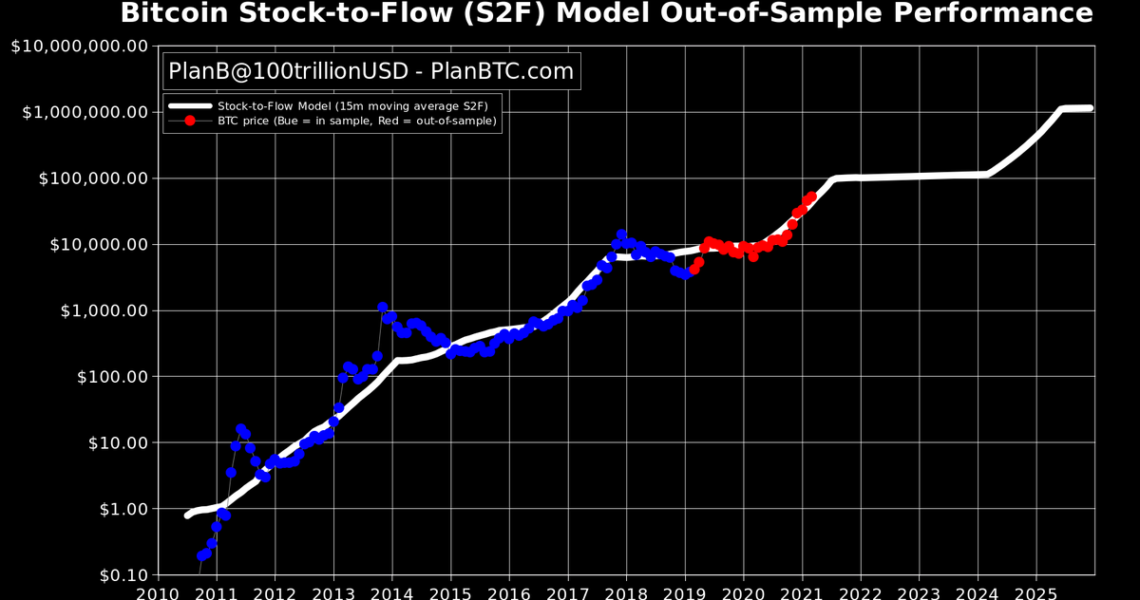 The creator of the notorious stock-to-flow model (S2F), Plan B has recently detailed that the price of bitcoin has surpassed the S2F model price by 26%. The strong momentum has a number of crypto enthusiasts thinking that bitcoin prices reaching the $100k to $288k range by the year’s end is possible.

Plan B’s stock-to-flow model otherwise known as (S2F or S2FX) is a popular chart that measures the existing number of BTC in circulation (stock) and pairs it against the number of issued coins minted during mining (flow).

To many crypto enthusiasts, the S2F model so far has been fairly consistent and following along the mapped trajectory Plan B and others have estimated. In November 2020, the S2F creator doubled down and told the public that there was “no doubt whatsoever” in his mind that his S2F model was “correct.”

At the time, Plan B said that he predicts the price of BTC will “tap $100K-288K before [December] 2021. In fact, I have new data that confirms the supply shortage is real,” he added. On March 1, 2021, Plan B revealed that the S2F model was still working and the price of BTC was actually 26% above the model’s predicted trajectory.

Bitcoin S2F model was published in March 2019. The model’s out-of-sample performance (on new data after Feb 2019) has been spot on.

In another tweet on Wednesday, Plan B criticized the S&P 500. “My most hated chart about bitcoin,” he said, sharing a correlation technical analysis chart. “S&P 500 correlation… S&P $4K and BTC $100K soon?” Plan B asked. During the last week, a number of bitcoiners have also been congratulating Plan B for his S2F predictions seemingly coming to fruition. “Stock to flow, quite incredible to see it play out,” one trader said and called Plan B a legend. Although, there’s plenty of S2F naysayers who have criticized Plan B’s stock-to-flow model in the past, but in more recent days S2F haters have been quieter.

Despite the critics, Plan B still seems extremely confident about his prediction and the S2F model as he noted on February 20, 2021, that the price of BTC reached the $55k target that he predicted in March 2019.

“$55k feels very natural and even low now, but back in early 2019 people laughed at [CNBC’s Joe Kernen] for just mentioning the possibility of $55k BTC,” Plan B tweeted that day. The S2F model’s creator also mentioned that the Wall Street Journal also noted that Plan B’s S2F model was on track as it completed the $55k zone last month.

News.Bitcoin.com readers who are interested in tracking the live version of the S2F model can follow the trajectory here.

What do you think about Plan B’s S2F chart and the possibility of $100k to 288k prices in 2021? Let us know what you think about this subject in the comments section below.