Have you encountered a random program freezing up? The usual fix is to open the Windows Task Manager, and manually “End the Task”. or to use a different process manager, such as Process Lasso, MiTec Task Manager Deluxe, or Process Explorer to take care of the misbehaving process. That works, most of the time.

Now, if a program has a lot of sub-processes under it and freezes, that’s going to be annoying. This is where the “Kill Process Tree” option comes in handy. But only when they are grouped under one, right?

Otherwise, you’ve to end the tasks one-by-one. Killer is an open source Task Manager that lets you end several tasks at once. When you run it for the first time, you’ll be offered the option to install the program for you, or for all users. The latter requires administrator privileges, I chose the former, but you can select either, it doesn’t affect the program’s functionality.

The interface seems to follow the UWP standard, with a search bar at the top. You may enter the name of a process or its ID in the box to filter the list of running processes. Killer displays the icon (in case of normal programs), the process ID, name of the process, its CPU Usage and memory usage. 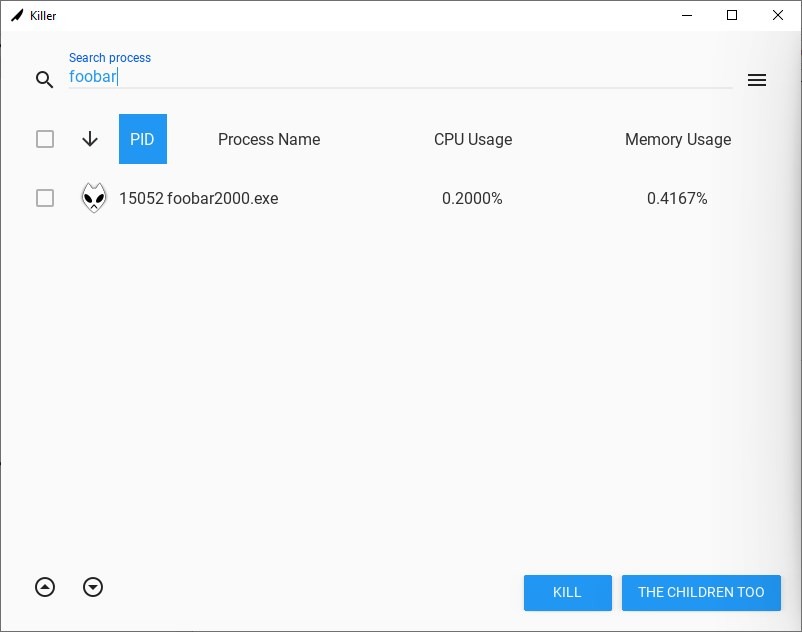 As if the name of the application wasn’t dark enough, the label of the 2nd button at the bottom is downright creepy. Anyway, what do these buttons do? Refer to the example at the beginning of this article. To end an individual process, check the box next to it and hit the Kill button. Mark multiple ones and close them in one go by hitting the other button. If the program failed to close the application, it will display a message informing you about the same. This happened only once for me though, with the DropboxUpdate.exe.

There are 2 ways to sort the list of processes, you can double-click on the column name, or use the downwards-arrow button in the column bar to sort the list alphabetically or in the reverse order. The Up and Down arrow buttons near the bottom left corner of the screen, let you jump to the top or bottom of the process list. This is particularly useful, since the program’s scrolling isn’t exactly buttery smooth.

You can access Killer by pressing the hotkey Control + Shift + Key. This only works if you allowed the program to place a desktop shortcut. Basically, the installer creates a hotkey for the shortcut, you can do this yourself for any application. And as for Killer’s interface, it doesn’t support any hotkeys. The menu button in the top-right corner has an option to change the display font size.

Killer is written in Python. It requires about 100MB of disk space to be installed, and there’s no portable version available. If you access it from the Windows Task Manager, Killer will appear under the name “That Damn Chrome”. That’s probably the author’s way of mocking Chrome’s multi-process behavior.

I noticed a lag when I tried to move Killer’s window from one place to another. The only issues I had with it were the lack of support for keyboard shortcuts, occasional stutters, and a very noticeable bug in the program, right-clicking anywhere on the interface adds a “circle” icon, it goes away when you click on it. I can’t say for sure, but it could be a placeholder for a context menu. I should remind you that the program is still in a very early development phase.

Its simplicity is perhaps Killer’s greatest strength, advanced users may want something better, I like Process Hacker and Process Explorer, but that’s a matter of personal preference.