Today OnePlus is launching their new 2021 line-up of flagship devices, the new OnePlus 9 series. This year, the company is refining its formula that it had employed in 2020 following the successful OnePlus 8 series, doubling down on aspects that make the company’s devices no longer value alternatives to the competition, but outright amongst the best devices you can get on the market.

OnePlus is launching three devices today, the regular new OnePlus 9, the OnePlus 9 Pro, and a more budget oriented refresh in the form of the OnePlus 9R. The OnePlus 9 Pro follows in the footsteps of the 8 Pro last year in that it’s a no-compromise device, and this year OnePlus is again equipping the phone with the best possible display hardware that’s available on the market. Also, a change in the usual model line-up is the fact that both the OnePlus 9 and OnePlus 9 Pro feature the same two new-generation camera modules and sensors, with OnePlus promising great advances in photography and picture quality in collaboration with Hasselblad – an area in the last few generations which was admittedly a weak-point for the company in the last few generations.

Starting off with the new OnePlus 9 and 9 Pro, both devices now feature the new Snapdragon 888 SoC from Qualcomm. We’ve extensively reviewed the chip in our coverage of the S21 Ultra, and whilst generationally it might not be as great as we’ve been used to in the last few years, it’s an improvement and will likely have no issues in giving you excellent device experiences in these new smartphone models.

The lower-end model OnePlus 9R uses Qualcomm’s new higher-binned Snapdragon 865 variant called the Snapdragon 870 – essentially a faster variant of the 865+ with main CPU clocks of up to 3.2GHz. It’s to be noted that the actual performance differences between this chip and the newer Snapdragon 888 in the 9 and 9 Pro should be rather small, so it’s definitely a valid way to create a more budget flagship device this year.

OnePlus keeps the DRAM and memory configurations similar this year with either 8 or 12GB of main memory, alongside 128 or 256GB storage options. The storage has been updated to a faster UFS 3.1 module.

The OnePlus 9 Pro: All the bells and whistles

We start off with the new OnePlus 9 Pro which is the star of today’s announcement. Following up the 8 Pro last year, OnePlus again integrates everything but the kitchen sink into the new high-tier flagship smartphone this year – however doesn’t quite go as far as to venture into the “Ultra” category of devices that have emerged with Samsung’s bigger flagship megalodons, and being followed by some other vendors.

At 163.2 x 73.6mm footprint, the OnePlus 9 Pro remains relatively mid-size by today’s standards, and is actually narrower than the 8 Pro by 0.8mm. Generally, I find this to be an important characteristic of the phone as the competition’s top-end devices keep getting bigger and heavier.

The phone’s design appears to follow closely the ergonomics of the regular OnePlus 8 last year, featuring rounded front display glass and back cover glass – however with the curvatures on both sides being more symmetrical to each other, compared to the more prominent front display curvature of the 8 Pro design. This is actually quite welcome and a big plus in my view as I had found the regular OnePlus 8 to be an extremely ergonomic device. 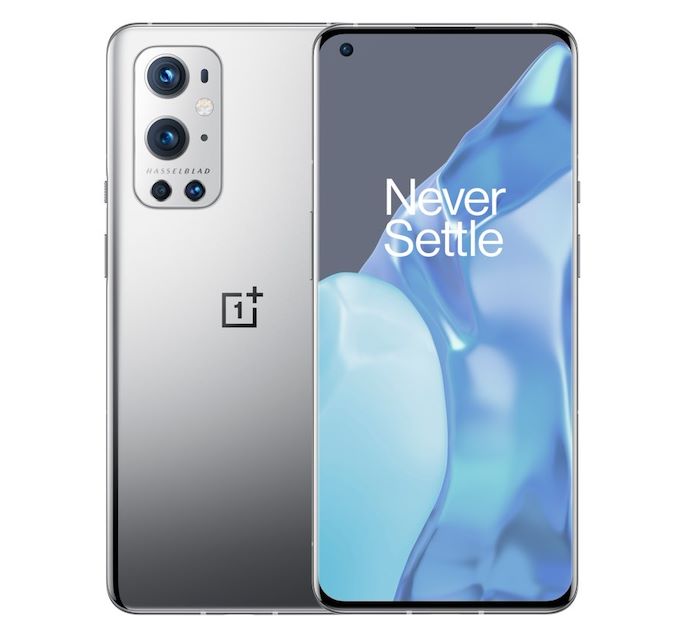 The star feature of the OnePlus 8 Pro is the new display – it’s still a 6.7” 3216 x 1440 resolution and 120Hz refresh rate display like the 8 Pro, however this year OnePlus has moved on to a newer LTPO panel technology and promises hardware adaptive refresh rates, much like employed in the Note20 Ultra or the new S21 Ultra. As we’ve seen on those devices, the hardware LFD/VRR is a key component to advancing battery life of the device when under 120Hz mode into usable every-day experiences. OnePlus advertises new 8192 brightness levels, indicating that the new DDIC is 10-bit capable. It’s not clear if the emitter on this display features the same new high-efficiency characteristics as on the S21 Ultra panel – but even if it doesn’t, the OnePlus 9 Pro should have among one of the best screens of any phone in 2021.

In comparison to the 9 Pro, the new regular OnePlus 9 features a more cut-down display. In its dimensions it’s smaller at 6.55”, but it’s not curved, and thus doesn’t affect much the device footprint which lands in at 74.2mm width, actually larger than the 9 Pro.

It’s a 2400 x 1080 resolution screen with 120Hz refresh rate, and is of a more regular panel technology as we’ve seen in past years. The display would have to rely on more coarse software based refresh rate switching to achieve higher power efficiency at 120Hz, we currently don’t have any more details on how this is implemented on this phone. 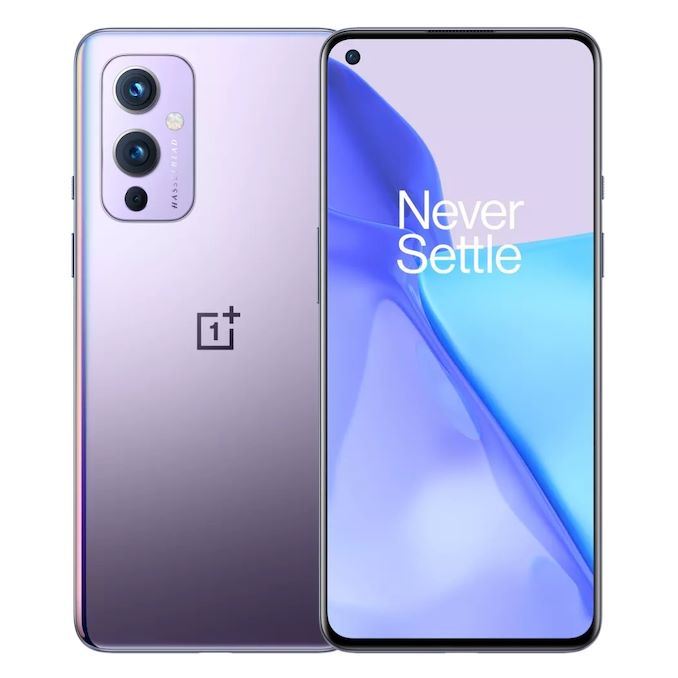 From the back of the phone, the OnePlus 9 is extremely similar to the OnePlus 9 Pro, only differentiated by the camera setup differences. The front is more obvious as it’s a 2.5D display, being more flat for much of its surface, bar the extreme edges.

What’s quite unusual and not immediately visible from pictures is the fact that the mid-frame of the phone is made of a fibre-glass composite material, rather than metal, and a metallisation finish. It’s an interesting choice that we haven’t seen before in the industry – usually it’s the back cover which gets a material change, not the actual frame of the phone.

One of the big new features of the OnePlus 9 and 9 Pro are their completely new camera setups. It differs quite considerably from the more exotic attempts we’ve seen in the market, and opts to go for a simpler, but extremely solid camera setup.

In terms of main sensor of the 9 Pro, we’re seeing a new IMX789 sensor landing in at 48MP. The sensor has 1.12µm pixels and a Quad-Bayer colour filter setup, regularly binning down to 12MP 2.24µm effective pixels.  What’s quite weird and unique about the approach here, is that this is a 16:11 sensor, differing a lot from the traditional 4:3 form-factor we’ve seen in smartphones since forever. OnePlus here also advertises it’s a native 12-bit ADC capable unit, which should increase the dynamic range that the module is able to capture.

The ultra-wide sensor on the new phones is also very interesting. The sensor is a 50MP IMX766, the same sensor OPPO had used in the main camera sensors of the Find X3 Pro, featuring 1.0µm pixels that bins down to 12.5MP shots with 2µm effective pixel sizes.

What is actually most interesting about the Ultra-Wide module here isn’t particularly the sensor, but the optics. OnePlus is employing newer advanced free-form lens optics which are able to correct the distortion of ultra-wide captures into rectilinear captures, meaning that throughout the frame, straight edges remain straight. This is actually a big deal when it comes to image quality of the sensor as correcting distortions optically is infinitely higher quality than correcting them in post-processing, meaning we should be expecting much sharper images out of the OnePlus 9 and 9 Pro’s UWA’s module. Huawei had been the first to employ this technology, but only used it in the super-high end Mate 40 Pro+, which is scantily available.

Exclusive to the OnePlus 9 Pro, we also see a 3.3x telephoto module in the form of a 8MP OV08a10 sensor. How the quality of this sensor pans out compared to the main module’s native high-res modes remains to be seen. Generally, it’s interesting that OnePlus here doesn’t go much more aggressive with the telephoto, and the company resists of using some of the more exotic periscope or more aggressive sensor or optics setups compared to other competitors. I find this a rather sensible approach, and I do like if that means that the size and weight of the phone as well as the camera bump remains reasonable.

While the ultra-wide sensor between both phones is the same, the regular 8 uses lasty year’s IMX686 sensor module. The main specifications are the same in terms of 48MP 1.12µm – but the older sensor lacks the newer 12-bit capture capability and likely has the worse dynamic range compared to the 8 Pro. 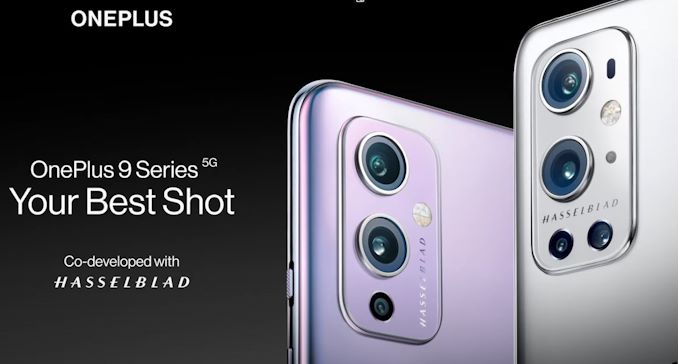 Finally, the wildcard in the whole camera setup is on the part of the software. OnePlus has been marketing their collaboration with Hasselblad on the camera system, and they promise much better colour calibration this generation. We’ve seen these kinds of collaborations before in the market, most notably maybe Huawei with their partnership with Leica. This can vary from hardware co-design on the part of the optics through to actual image processing input from the partnering company. Exactly how the Hasselblad partnership will help OnePlus isn’t clear beyond their promises of more accurate colour reproductions, but at least I hope this results in better tone-mapping, gamma curves and realistic colour reproduction for the new phones, as it always had been the greatest area of weakness in past OnePlus camera implementations.

Alongside the new 9 and 9 Pro, there’s also a 9R. This is seemingly a more budget oriented device. Alongside the Snapdragon 870 SoC, the phone features the same display as the OnePlus 9, but differs considerably in the camera department. 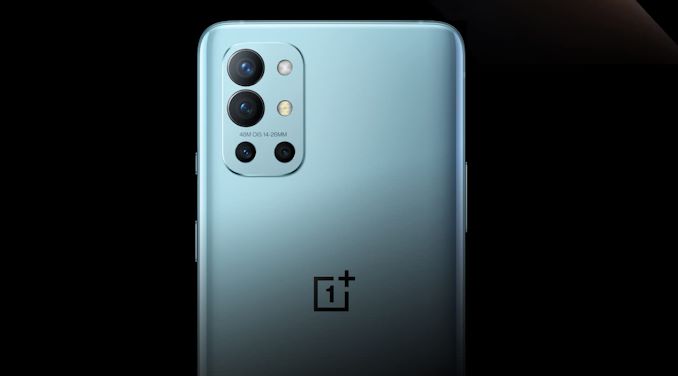 With a 48MP IMX586 main camera sensor and a 16MP ultra-wide, the camera setup here seems to be in line with the OnePlus 8 and 8T of last year, and adds in a 5MP macro sensor alongside the enigmatic 2MP monochrome unit. Generally, I’m pessimistic about the camera quality here, particularly if OnePlus is also just inheriting the camera processing from last generation – there’s no Hasselblad partnership on this model.

To be completed as the event unfolds …