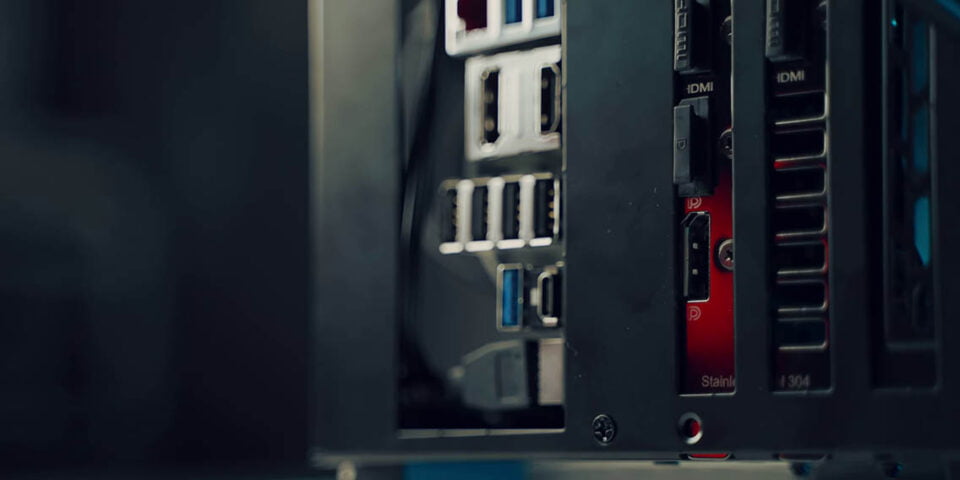 I’m really excited to bring you an exclusive look at the new Lian li Q58. This case really brings some new, interesting, and unique features into the ITX space that I’m sure many people will appreciate them. Personally, I like the fact that this not a massive enclosure, at around 15 liters it is competitive with the NR200P from Cooler Master and the Meshlicious from SSUPD.

It also has its own visually distinct character, which I appreciate, so it’s not like a DAN Case copy or an NR200 clone. With an expected launch date sometime around June, and a $120 USD price tag I think it’s going to be competitive of other SFF cases.

First let’s cover the exterior. It is elegant with a nice touch of simplicity. You can see that it has clean uniform lines all around the enclosure, with that unique dual texture look both on the materials and the finishes too. The front panel for example has that matte texture on the top and a glossy texture at the bottom, while for the sides we have that dual panel action, both of which sit on swivel hinges and can be removed easily. Both are held in with strong magnets, but the glass panel also has an additional thumb screw to hold it in place securely.

The bottom one is this high performance metal mesh for both airflow and dust filtration, and a tempered glass panel in the top half to reveal some of your hardware. There is also a built-in illumination strip at the top, which is soft, addressable, and can be controlled independently via the case. The front I/O is standard for ITX, with one USB Type-C port, one USB Type-A port, a four-pole headset jack, and a power button.

As for build quality and materials, this is a prototype, but it’s still a very solid one. It has an all aluminium exterior with the glass side panels and a steel frame. Overall, I’m satisfied with this design direction, it has a character of its own with that dual-tone finish, and it has a functional design thanks to those mesh bottom panels that will contribute to better airflow.

As for full specifications, this case is around 15 liters in volume, triple slot 320mm GPUs will fit, CPU towers up to 70mm will fit too, and there is top panel support for 240 or 280mm radiators. As for the supply, this case is very versatile, supporting SFX, SFX-L, and even ATX options. That ATX power supply option is very interesting, how are they able to fit a large PSU in such a tiny enclosure? Well I will show you!

Getting inside we have the standard dual-chamber layout, like with many other ITX cases in this frame structure. A triple slot GPU will fit on the GPU side, and a riser cable included, but make sure to familiarize yourself with all the potential issues you might encounter with a riser cable. The added height of the enclosure allows this really thin form factor as the radiator is installed on the top bracket that is easily removable and installed back into the frame via the top. The advantage of this configuration versus having the radiator on the side, like we see with many other cases of this form factor – including the NR200 – is that I don’t get that exhaust into your space if you have the case right beside you. With the Q58 everything is exhausted through the top, and you won’t physically feel that hot air blowing on you.

Here is where the ITX motherboard goes, it is mounted upside down, and beside it is the power supply bracket. The GPU area is behind the motherboard in the second chamber. While that is all fairly standard, there are plenty of cool new features inside the Q58 as well. First of all, you can move the SFX power supply bracket down slightly to accommodate the 280mm right at the top. You lose a bit of clearance for cables underneath the power supply in this configuration, but I still appreciate the added cooling option.

There is a removable plate underneath the power supply that can house one 120mm fan for additional intake into the case or it can be used as an SSD mount as well. It is nice also to have this bracket removed during assembly, because it gives you full access to all your cables.

We also have this additional plate for a 3.5-inch drive or an SSD that can go in the place of any of the 120mm fan mounts, so either up top or on the side. And since we have the triple slot GPU chamber, these side brackets let you install low-profile fans for additional cooling on the GPU side. Furthermore, we have an interior fan hub with smart placement at the rear on a swivel bracket that let’s you route all your fans and addressable lighting cables without having to strain your fingers. This is a brilliant design – thank you Lian Li – especially because you can access that top plate from the back without needing to access everything on the interior.

There are also these two discrete buttons for LED mode and colour beside the Lian Li logo, if you don’t want to connect the addressable cable into your motherboard. Then there is a seamless hot swappable SSD mount at the front with interior SATA cables included and a removal plate to help you take out the SSD as it’s quite snug in there.

Finally, there is that ATX power supply support, this bracket allows installation of an ATX PSU plus a 120mm or 140mm fan for the CPU area, or a 120mm all-in-one cooler. This requires you to move that entire middle plate towards the GPU side, in which case you lose one PCIe slot but gain all that room for a standard ATX PSU. By the way, motherboard standoffs are included for this configuration since you only move the middle section and the rear I/O stays as is. This direction for the Q58 allows it to stand out among other similar sized ITX cases that do not support ATX power supplies. And while it comes with its own limitations, like a smaller GPU chamber and worse cooling for the CPU, it allows you to use your existing ATX power supply and not everything in the ITX space has to be high wattage.

The only thing Lian Li has to make sure to do right is markings on the actual frame, so that you don’t get confused as to which screws you need to remove, because with my prototype and an early stage manual it was a little difficult. I was able to figure out how to do it, but from an end-user perspective it would be great to have something on the actual frame that shows you which holes are for an ITX PSU orientation versus an ATX mode.

Now after my brief assembly I encountered a few little hiccups. My main concern here was with the riser cable, as it was hitting my top radiator fan without any real way to fold the cable out of the way. I’m working here with a prototype, but Lian Li has already addressed it with a built-in bracket that will hold the riser cable so it doesn’t bump into your fans. My second concern after I finished the system was I’m not completely sold on that mesh and tempered glass approach. At the top what are you showcasing with that glass? Some radiator and maybe some cables, and so you will have to do a really good job of managing all your cables so they are not visible at the top. I also do not like that power extension cable as it’s kind of bulky, and it is right there behind the glass.

A quick word on cable management, I hate doing cable management, especially in the ITX cases, but I had no problems here. Even though all the I/O cables were incredibly long, so I need to zip-tie them before routing, on the final retail release they will be shorter. And also because the motherboard area is so thin, it requires you to position the pump tubes facing back in order for them to stay low profile and out of the way for the side panel.

And so that is my overview on the new Lian Li Q58. I’m really excited to see what they do with the final release in terms of refining a few things. I think this is going to be a successful ITX enclosure because the price is not too high yet you still get tempered glass and aluminium exterior, and a really solid interior steel frame. I feel like the interior guts are perfectly modular for the modern 2021 SFF ITX enthusiast, which means like a 240/280mm radiator plus a triple slot GPU. That additional ATX power supply support is fantastic on such a tiny enclosure, it’s very rare for an ITX case from a large brand to have that capability.

I would love to hear your opinion on the Q58, I know that the situation with components and the hardware is very difficult right now, but this case is supposed to be released in June and hopefully things get slightly better by then people who want to start building new systems can actually find all the parts they need.