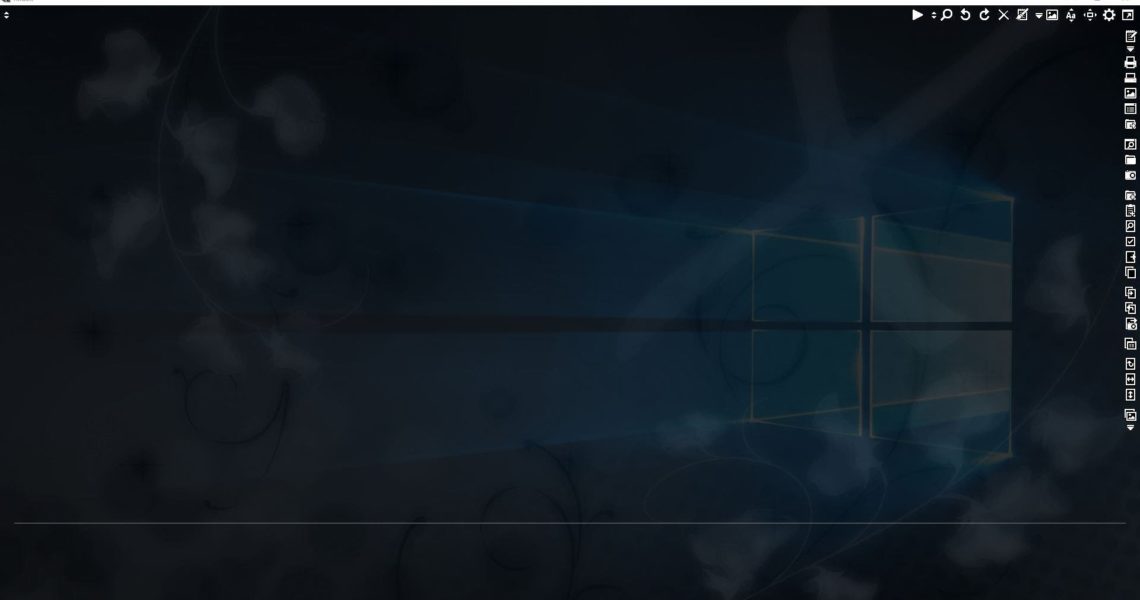 A lot of image viewers don’t come with a photo editor, let alone support for playing videos and music. FastStone Image Viewer is an exception to this.

I stumbled onto another such program recently, Xlideit Image Viewer. It is a portable application, and once extracted its folder weighs about 3.30MB. The program starts in full screen mode, and loads the Pictures folder. Hit the F11 key to switch to windowed mode, or the Enter key to hide the all the elements on the interface. The program has a transparent background.

Click on the double arrow icon in the top left corner of the screen to switch to a different directory. It doesn’t actually say “Select folder” or something, but if you select an image, Xlideit Image Viewer automatically loads the entire folder. This menu also has options to rescan the folder for new images, and a toggle for including sub-folders. 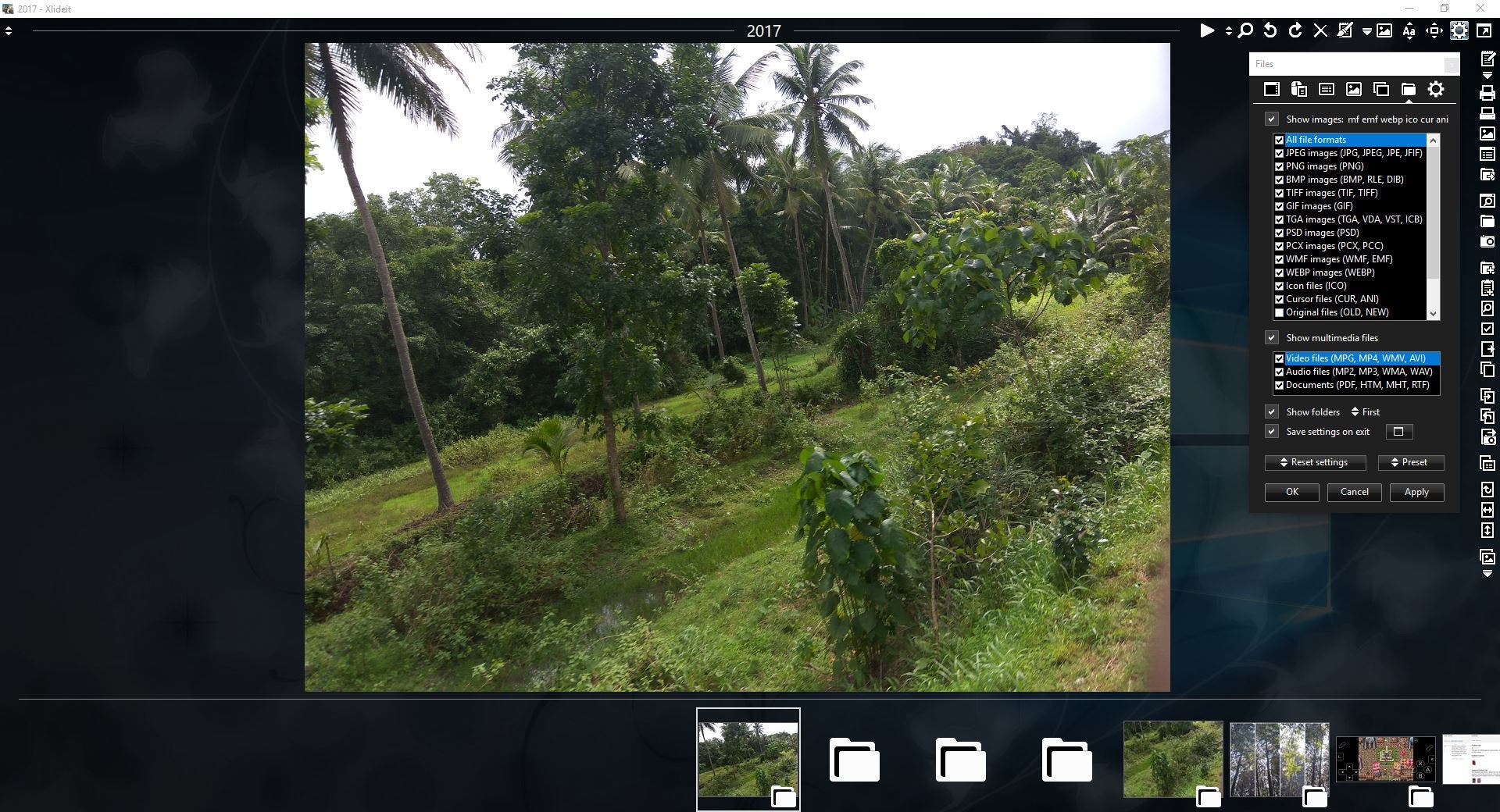 The thumbnail bar at the bottom of the screen displays the contents of the current folder. Use the left and right arrow keys to navigate to the previous or next picture, or do the same using the virtual arrow keys on either end of the panel.

Xlideit Image Viewer has a floating panel. It can be closed and recalled by clicking on the gear cog icon in the top right corner of the screen.

The first icon on the toolbar is used to start a slideshow of the pictures. The button next to it is the zoom slider, while the magnifying glass icon is a toggle for the zoom function. The next three icons are handy for rotating the images right or left, and to delete pictures (sends to the recycle bin).

The crop tool opens a pop-up panel with four tabs. This is the image editor in Xlideit Image Viewer. The first tab has options to crop the image, resize it, set the aspect ratio, rotate or flip the image, or convert the image to different formats. 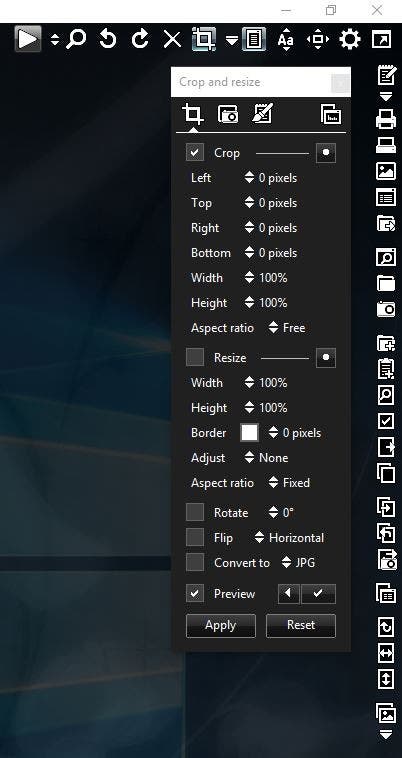 The Light and Color tab has controls for tweaking the brightness, contrast, saturation, hue, gamma, sharpen, grayscale, etc. There are a few filters such as equalize, posterize, pixelate, red-eye adjustment, and fade that you can use to add a cool effect to the picture. 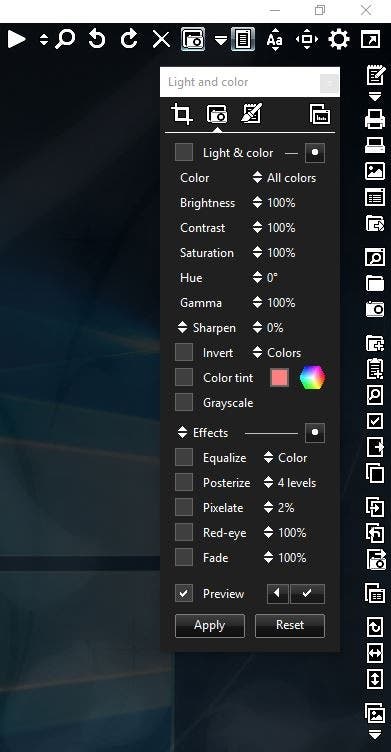 The Text and drawing tab is home to a plethora of editing tools from select, text, watermark, shapes, fill, color picker, and more. Clicking the Histogram icon opens its own panel. You can create a new image from scratch using Xlideit Image Viewer. 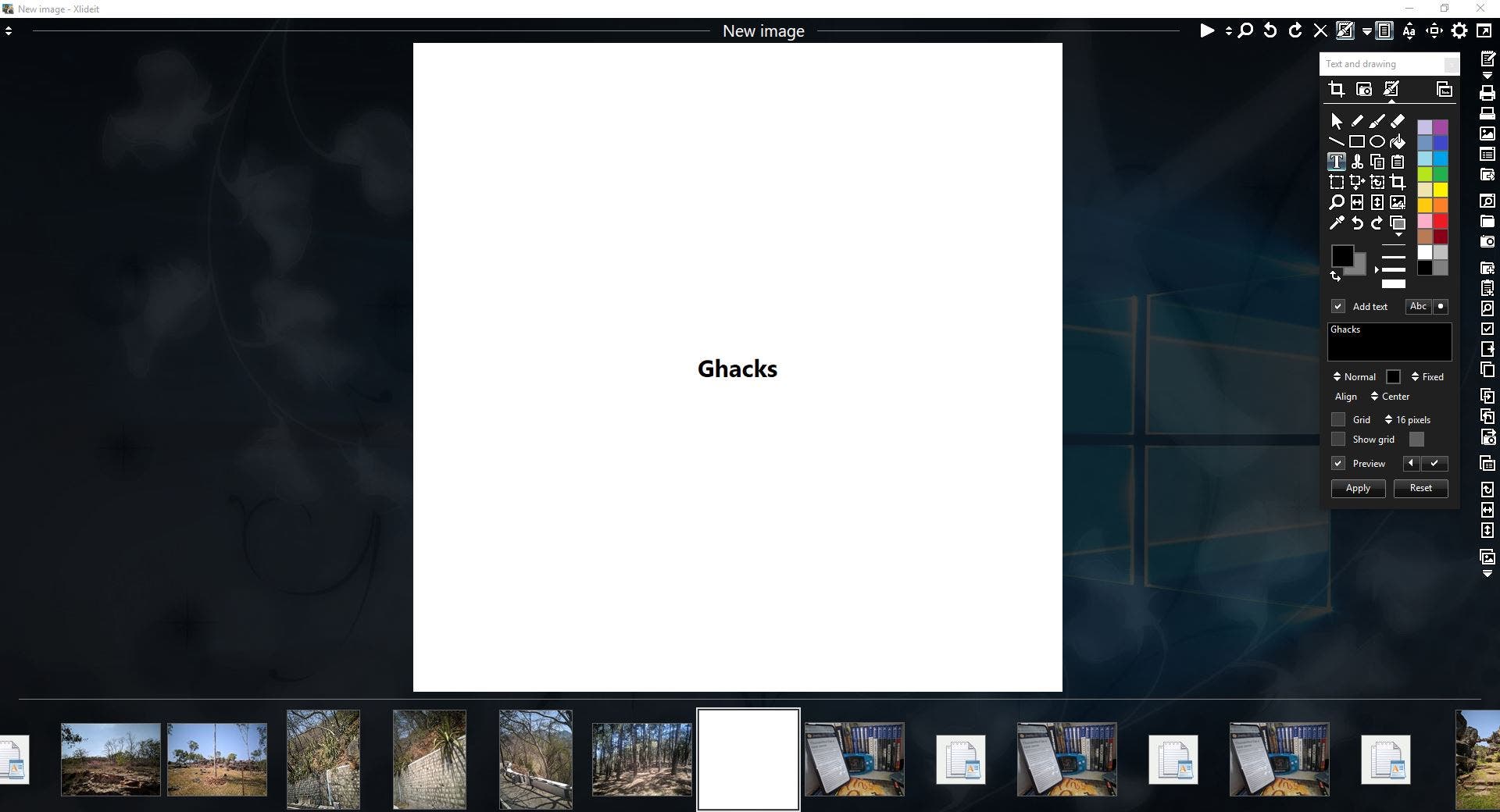 Click the Tools icon (downward arrow icon) on the toolbar to bring up a long menu. Use it to edit, print, scan, open an image or a folder. Toggle the sidebar, zoom, folders, tags. add, paste, find, select, remove, clone or restore images. 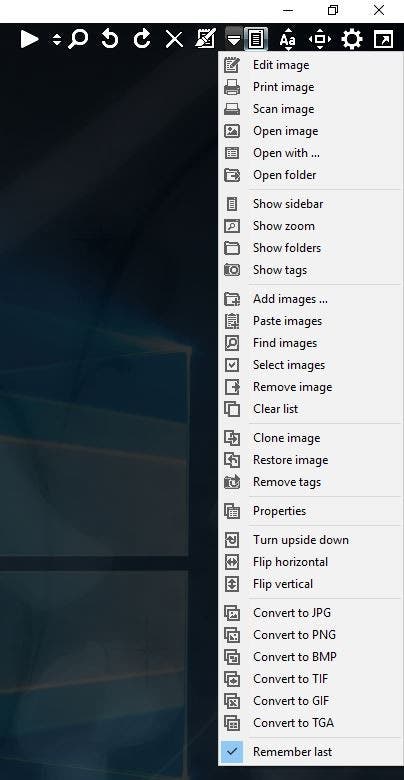 Right-click on an image to view a context menu with various shortcuts. 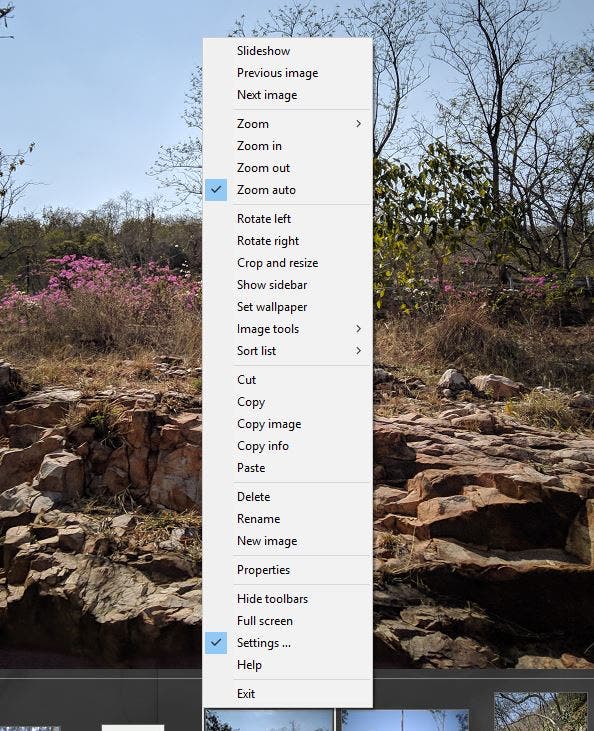 Other options in the Xlideit Image Viewer tools menu include viewing the current image’s properties, a flip tool, and ways to convert photos to JPG, PNG, BMP, TIF, GIF, or TGA image formats. 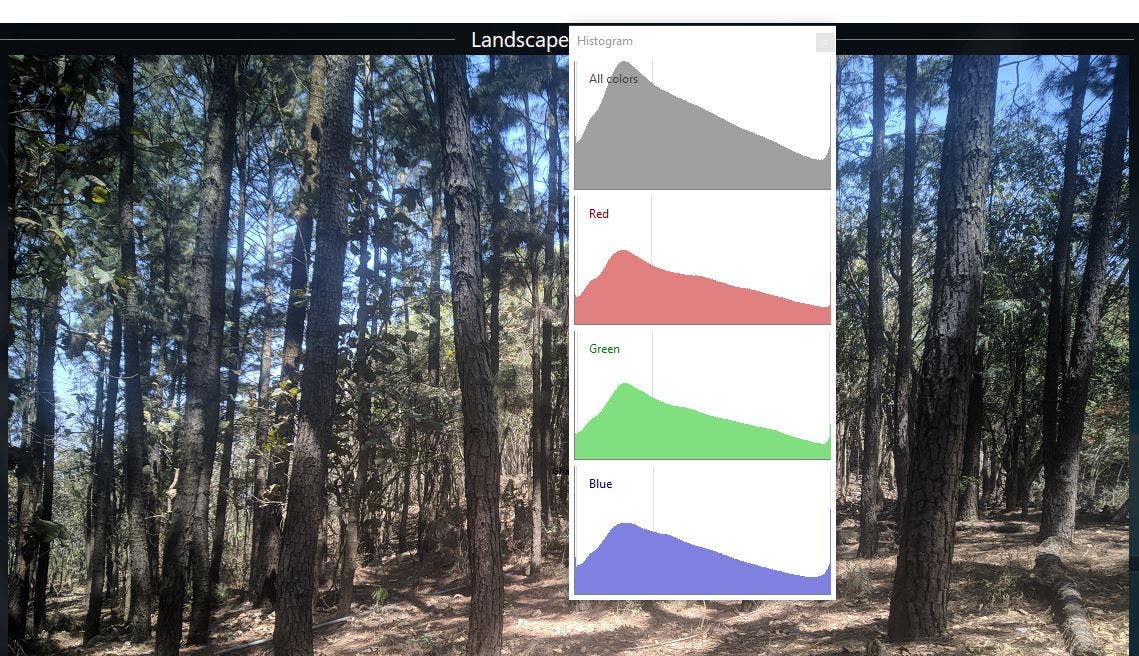 The icon with the camera on it removes metadata tags from photos. Use it with caution as this isn’t reversible, you may want to backup your photos before editing them. The program has many ways to sort the picture list: by name, file date, file size, image date, image size, width, aspect ratio, file type, camera tag, image tag, etc. 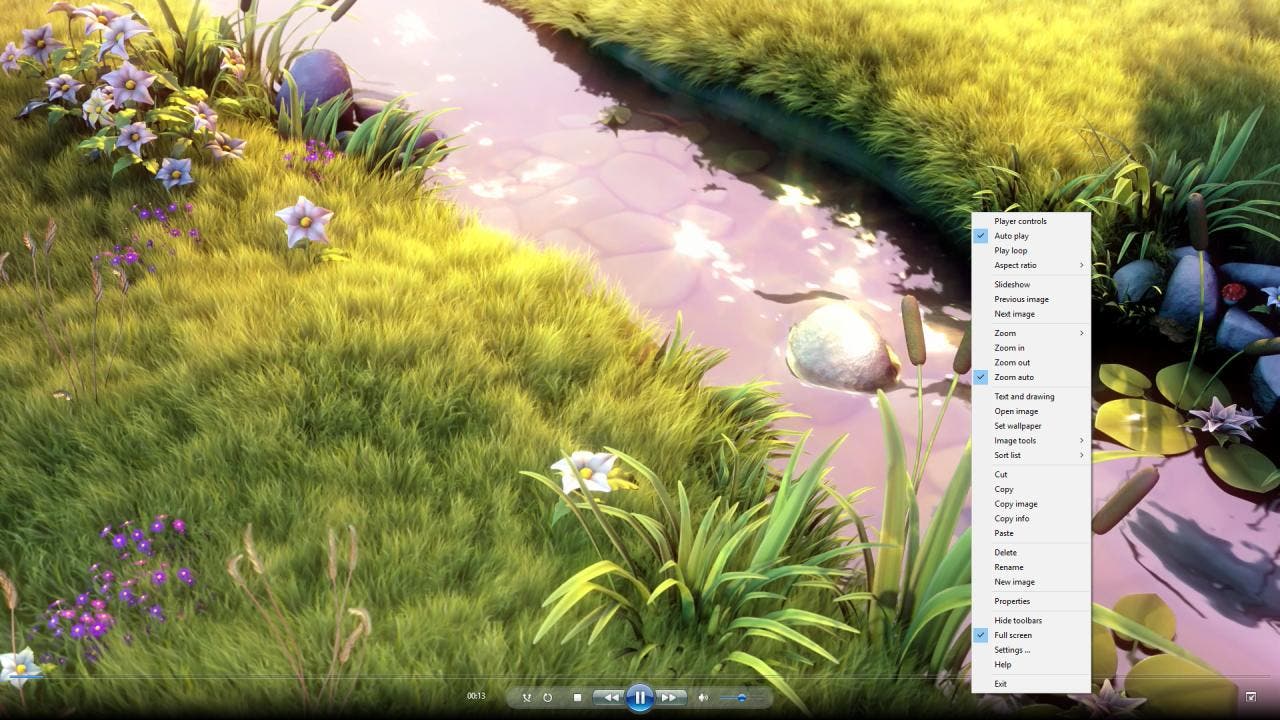 The program can also be used to view video files in the MPG, MP4, WMV, AVI formats, or to listen to MP2, MP3, WMA, WAV audio files. It supports viewing documents in the PDF, HTM, MHT and RTF formats. 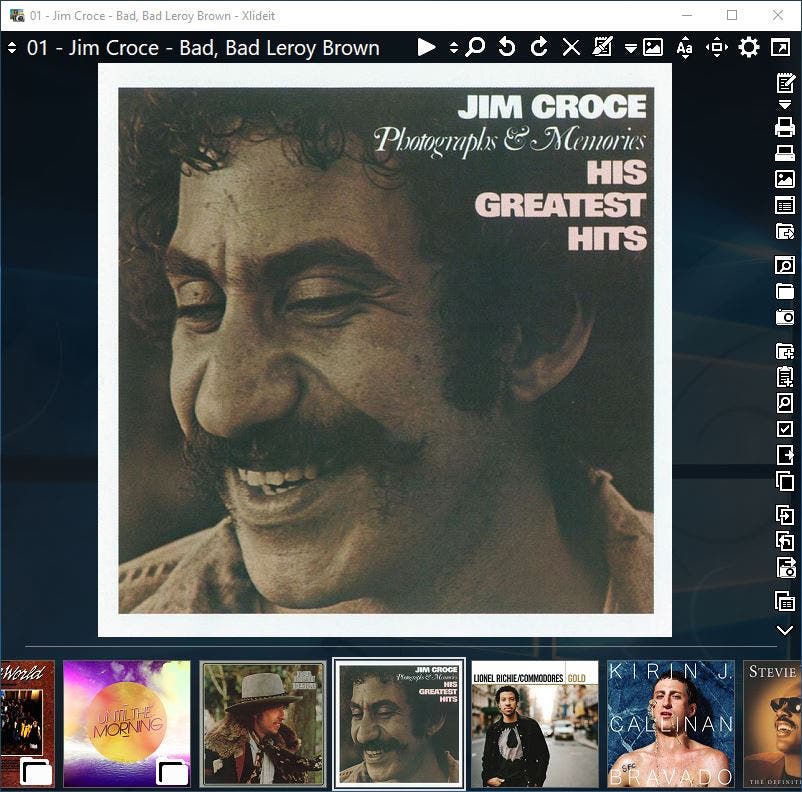 Note: The video player only worked in full screen mode during my tests.

The program is open source. Xlideit Image Viewer is light on resources, and has a useful set of tools for editing photos. The video and audio player are bonus features to have. It’s impressive that the program packs all these features in a 3MB package.