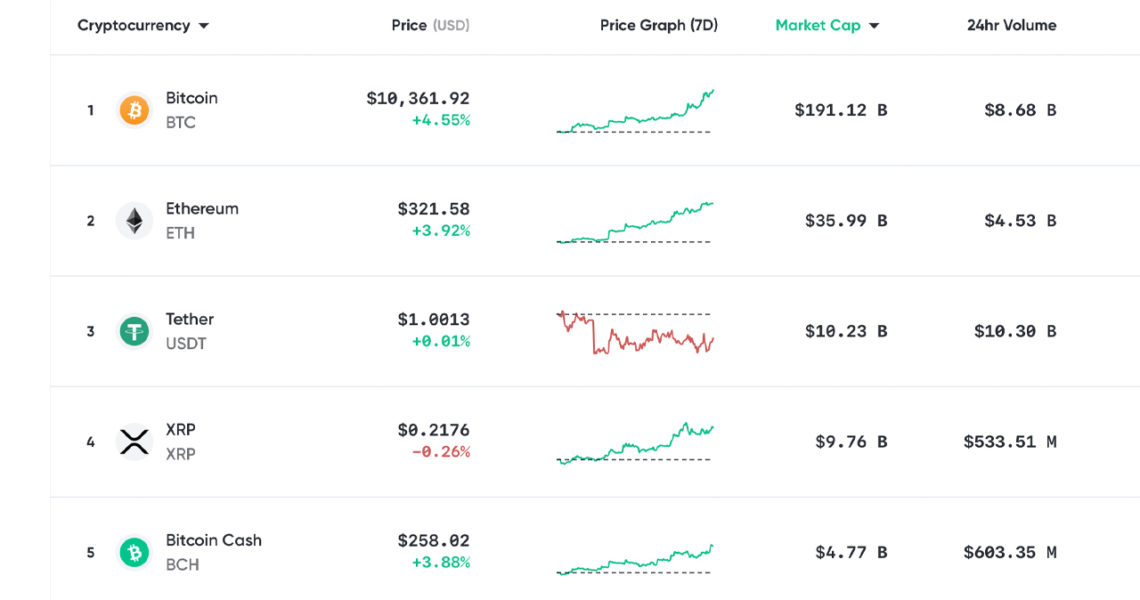 The cryptocurrency economy has spiked significantly on July 26 into the overnight trading sessions capturing over $300 billion in value. Bitcoin is trading above the $10,360 zone while ethereum is swapping for $321 per coin. Meanwhile, the precious metals gold and silver have seen incredible gains as well on Monday.

While the global economy has been shuddering, precious metals markets and cryptocurrencies have seen significant value flow into these ecosystems. On Monday, July 27 the entire cryptocurrency market capitalization of all 5,700+ coins in existence is around $304 billion.

ETH which is swapping for $321 per coin has an overall market valuation of around $35.9 billion in comparison to BTC’s $191 billion. Still, BTC’s dominance ratio is only 61.6% today while a number of alternative crypto assets have seen much larger gains. XRP is down 0.26% today and trading for $0.21 per coin.

The fifth-largest market cap bitcoin cash (BCH) is up 3.8% today as it trades for $258 on Monday morning. BCH has a market valuation of around $4.77 billion and roughly $603 million worth of 24-hour trade volume.

Many people are speculating on whether or not BTC can burst past the psychological $10.5K zone in the near future. After Sunday and Monday’s jump above the $10K range, many investors and speculators grew more optimistic. The popular crypto analyst @Chase_nl recently explained that the biggest resistance for BTC is around $11,500.

“Cautiously bullish — With that said, ETH never provided a solid retracement to get long before it continued north and I’d prefer to see BTC follow suit. A strong breakout leads to $11.5K as the first major resistance,” Chase_nl tweeted to his 15,000 Twitter followers.

Analyst: Risks of Investing in Bitcoin Versus the Potential Reward is Low

In a letter to investors on Monday, Etoro’s market analyst Simon Peters discussed how the risk of investing in BTC versus the reward is lower these days. Peters mostly discussed crypto assets like ETH and ADA, but when discussing BTC he said: “Bitcoin [has] soared through the $10,000 resistance level, hitting a high of $10,314 in the early hours of the morning.” Peters continued by adding:

In addition to this important move upwards, it is also pleasing to see that a respectable bottom of $9,000 is in place. Furthermore, Glassnode recently highlighted that bitcoin’s reserve risk, a metric used to assess the confidence of long-term holders comparative to bitcoin’s price, is growing favourably. Indeed, this confidence has been growing since September 2019, which indicates that the risk of investing in the crypto asset versus the potential reward is low.

Many analysts, experts, and economists think that things like barter and trade, precious metals (PM), and crypto asset values will continue to climb.

One of the biggest drivers of these monetary movements is due to the government’s relentless money creation. Moreover, another huge driver against the U.S. dollar is the falling returns on U.S. government-issued bonds.

This means the Fed’s recent financial bazookas and massive money creation have not supported any means of economic recovery and the failing bond game is weakening the U.S. dollar.