Tether Ltd printed a total of USDT 300 million Wednesday and this brought the total coins created to 540 million in the last three days alone.

Responding to a whale alert twitter post, however, Paolo Ardoino the CTO at Bitfinex, explains that the latest printing is for purposes of replenishing inventory on the Tron Network.

“Note this is an authorized but not issued transaction, meaning that this amount will be used as inventory for next period issuance requests,” says Ardoino.

Ardoino’s response, which came right after the alert, was immediately ridiculed by some twitter users. Others sarcastically urged Ardoino on. 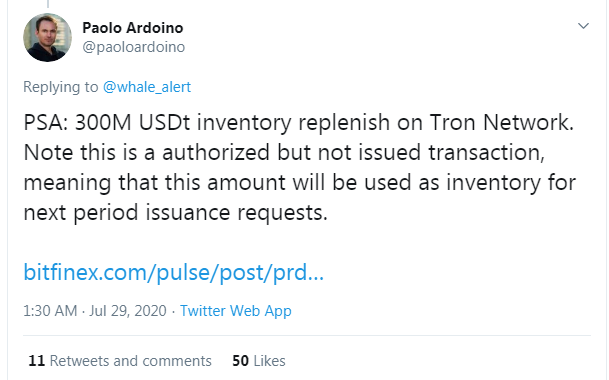 One Twitter user going by the handle lentejitaB asks, “Paolo is this the biggest tether mint in all Tether history?”

Meanwhile, this latest USDT printing could not stop the stablecoin from relinquishing its recent position as the third biggest digital currency when measured by market capitalization.

Ripple’s XRP, which traded at $0.21 on July 24, gained some 3 cents to peak at $0.24 on Wednesday, July 29 according to markets.Bitcoin.com. At the time of writing, XRP’s market capitalization is marginally ahead of that of USDT.

Since then, this resistance level had been rejecting the cross-border remittances token from achieving its upside potential. Historical data reveals that each time this cryptocurrency has been able to break above this moving average its price tends surge significantly.

Anissimov adds that “the substantial buying pressure was significant enough to allow the token to finally break above its 200-day moving average for the first time since early February.”

Moving past this hurdle led to the 17.13% upswing seen in the past few days.
“[As] buy orders continue to pile up, XRP may continue to rise to the next significant resistance barrier that sits at $0.25,” notes Anissimov.

Which of digital currency is going to win the battle for third place? Share your thoughts in the comments section below.