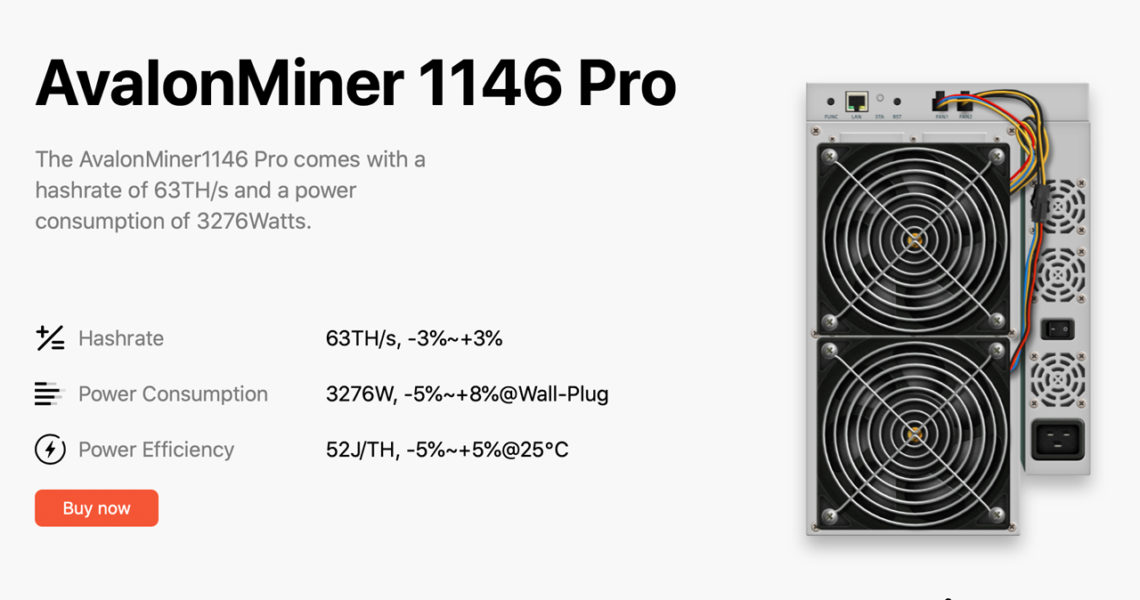 Two of the top mining manufacturers from China that recently had initial public offerings (IPO) released two new mining rigs. Canaan Inc. and Ebang Communications both have shares listed on the Nasdaq stock exchange, and the two firms just launched two ASIC mining devices with hashrates up to 63 terahash per second (TH/s).

Interestingly, both firms are listed on the American stock exchange Nasdaq, while the other two powerful ASIC manufacturing competitors, Bitmain and Microbt, are not public companies yet. On the flipside, Ebang and Canaan’s new machines do not produce as much hashrate as Microbt and Bitmain’s latest units.

The Canaan Avalonminer 1146 Pro “comes with a hashrate of 63TH/s and power consumption of [around] 3276W,” according to the specifications. The new Avalonminer was announced in June and the price is only available by inquiry.

Additionally, it’s unknown what size ASIC chips are used in the new Canaan 1146 Pro model. The new Ebang E12+ does have a price tag displayed on site, as the machine is selling for $1,500 per unit. The E12+ boasts a hashrate of around 50 terahash per second and an efficiency rating of around 2500W off the wall. Now the E12+ has much lower power consumption than the Avalonminer 1146 Pro, but it is 13 terahash less, as far as hashrate output is concerned. Canaan’s machine has power consumption rating that is a hair less than the Microbt Whatsminer M30S++, which is a whopping 3472W off the wall according to stats.

All four of the top SHA256 mining rigs have over 3000W per unit off the wall, but they all claim to produce 95 TH/s or higher. Bitmain’s Antminers and Microbt’s Whatsminers pretty much offer double the hashrate compared to Ebang and Canaan’s new devices.

The Microbt Whatsminer M30S++ and the first iteration of the model M30S offer hashrates between 100-112TH/s, but these devices won’t ship until October. Miners can purchase Bitmain models, which are readily available especially on secondary markets. Bitmain’s Antminer two S19s produce 100-110 terahash per second. The Antminer S19 Pro (110TH/s) is the most profitable ASIC device on the market today.

Because Canaan’s pricing isn’t available yet, there are no profitability metrics provided by data analytics websites. However, Ebang’s E12+ does show that at current bitcoin (BTC) prices, the new machine is profitable by $0.80 to $2.00 per day. However, the four top machines produced by Bitmain and Microbt are taking in $5-10 per day in revenue, depending on the model.

As mentioned above, both Microbt and Bitmain have not gone public by selling shares on any principle stock markets. Although last year it was rumored that Bitmain had confidentially applied for an initial public offering (IPO), which never came to fruition.

Despite the lack of IPO status, these two firms (Microbt & Bitmain) still have a much larger market share as far as ASIC mining rig sales are concerned compared to Ebang and Canaan. Moreover, Microbt has been nipping at the heels of Bitmain, the firm that commands the largest portion of the world’s market share for ASIC sales.

Canaan and Ebang have been listed on Nasdaq, but the machines they are releasing are far less powerful than the competitors’ offerings.

Canaan’s stock isn’t doing well and each share is selling for $2.50 today, as the stock is down 7% on Saturday afternoon. Canaan shares are sold under the ticker “CAN” (NASDAQ: CAN) which went on sale on November 21, 2019, and the firm sold $90 million worth of U.S. shares. The CAN shares came out of the gate at $8.99 per share, which is a massive loss of approximately -72.19%.