Today Samsung is announcing the much-awaited new Galaxy Note20 and Galaxy Note20 Ultra via its Unpacked August 2020 live stream event. Much like in 2019, Samsung is continuing to offer two variants of the Note series flagship devices, only that this time around the bigger and more feature-rich variants adopts the “Ultra” denomination, with no “+” variant this year. Unlike the Note10 series, this also means that the new Note20 series are also more significantly differing in their specifications, as Samsung is adopting the same differing camera system approaches as on the S20 series, with the Note20 Ultra offering a higher-end camera system compared to the regular Note20.

Naturally, the area where the Note series differentiates itself the most from the S-series is the fact that the phones come with the S-Pen stylus that allows you to write and control the phone with.

Starting off with the hardware of the two new devices, in terms of SoC it looks like Samsung is using a newer Snapdragon 865+ SoC – although it’s not quite exactly the specifications that Qualcomm has advertised a few weeks ago. The one difference is that instead of Qualcomm’s advertised 3.1GHz, the new chip here clocks in at a lower 3.0GHz. It’s possible that Samsung opted to lower the frequency to maintain better efficiency or power consumption metrics. We don’t yet know if Samsung has made any changes to the GPU frequencies and whether it showcases the 865+’s full +10% performance boost.

Naturally, Samsung is still continuing to dual-source SoCs, and European and other global users in non-Snapdragon markets get the S.LSI Exynos 990 that we found in the Galaxy S20 series. It’s odd to see the Snapdragon variant receiving a small SoC bump while the Exynos variant remains the same, but it’s unfortunately just the reality of the situation of Samsung’s hardware strategy. Whilst the Exynos 990 isn’t bad this year, it’s notably lagging behind the Snapdragon variant both in performance and efficiency.

In terms of memory, all the Note20 Ultra will be offered with 12GB of LPDDR5 for it’s 5G variant, while the 4G Note20 Ultra and the regular Note20 will come with 8GB of memory.

In terms of storage, the Note20 is offered in 128 or 256GB, although oddly enough the 128GB variant only is available in the 5G model of the phone. The Note20 Ultra also shares this oddity, with an extra 512GB configuration option for both 5G and LTE models.

Last year, the Note10 series was a bit controversial due to the fact that the regular Note10 came with an only 1080p display, which had been a downgrade from the usual 1440p resolution that Samsung employs in its flagships.

This year, Samsung made an even more inexplicable hardware choice when choosing the Note20 display characteristics: It’s still a 6.7” 2400 x 1080 resolution AMOLED screen again, but what’s really odd is that it doesn’t feature any high refresh rate capabilities at all, skipping on one of the new main feature additions of 2020 devices.

The display is also using a flat-style design – this isn’t the more flatted curve design as found on the S20 and S20+, but rather a fully flat screen. Whilst this is a subjective design choice, I can’t help but feel that the Note20 here is more akin to a Note20 Lite due to its lacklustre specifications on the display side of things. 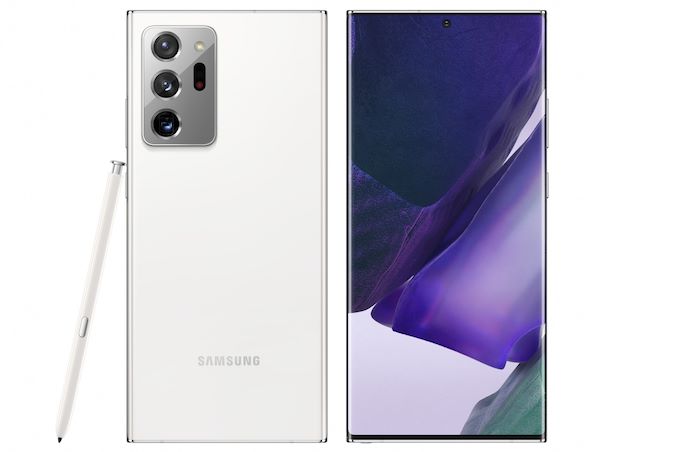 The Galaxy Note20 Ultra is more full-featured, and here we see the expected 120Hz 6.9” 3088 x 1440 AMOLED display, sharing feature parity with the S20 series devices. We don’t know yet if Samsung now offers full QHD rendering resolution at 120Hz or if the phone is still only limited to FHD when choosing the higher refresh rate.

What’s present on both Note20 series and a massive improvement in user experience, is the new S-Pen’s input latency. Samsung was able to reduce the input to photon latency down to a mere 9ms which gives a much-improved writing experience, as input latency is an extremely critical aspect of such input methods. Samsung says they’re using machine learning input prediction as part of the techniques used to achieve this improvement, which is a great use of AI in a phone. 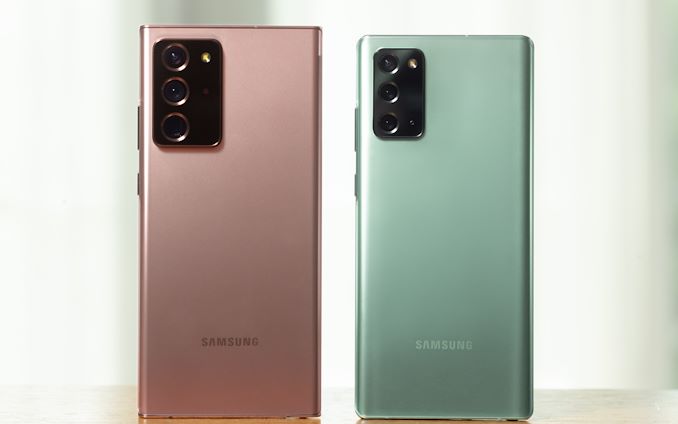 The Note20 Ultra remains a slightly bigger device, although it doesn’t change much compared to the Note10+ beyond a weight increase from 196g to 208g. The Note20 however has greatly increased its footprint compared to the Note10, growing from a 72mm wide device to a 75.2mm width, meaning it’s a notable form-factor change in terms of ergonomics. Weight has also greatly increased from 168g to 194g. Most of the weight increase has been the greatly increased battery capacity to a 4300mAh (up from 3500) battery. The Note20 Ultra had a smaller battery boost from 4300mAh to 4500mAh.

Samsung is adding a slew of new colours, of which they claim the new “Mystic Bronze” is now the highlight of the series. Beyond black and white options for the Ultra, we see a lighter black and a silver variant for the regular Note20.

What’s actually the biggest change in the new phones isn’t the colours themselves, but the finish of the material. For the Galaxy Note 20 Ultra, Samsung is now for the first time employing a chemically etched frosted matte glass back cover. This had been something that I really felt was missing from the S20 series devices so I’m super happy to see Samsung finally jumping on this bandwagon, allowing for fingerprint smudges on your phones.

The Note20 also adopts a matte finish, however Samsung here doesn’t use chemically etched glass, but rather uses a layer of polycarbonate on top of the glass. Whilst this might give a good feel and also gets rid of fingerprints, I wonder how this material will hold up against scratches and whether the phone will be more scratch-prone than a regular glass back.

On the topic of scratch resistance, the new phones now feature Corning’s newest Gorilla Glass Victus on the front displays.

Cameras – Matching the S20’s except for a different periscope

On the camera side of things, the Note20 series don’t bring too many new features to the table. The Note20 features the same camera setup that we find on the S20 and S20+, meaning a 12MP 1.4µm f/1.8 main wide camera, a 64MP 0.8µm f/2.0 secondary wide-angle camera, and a 12MP 1.4µm f/2.2 ultra-wide-angle unit. I found this camera combination to be extremely solid and probably the best solution in 2020. 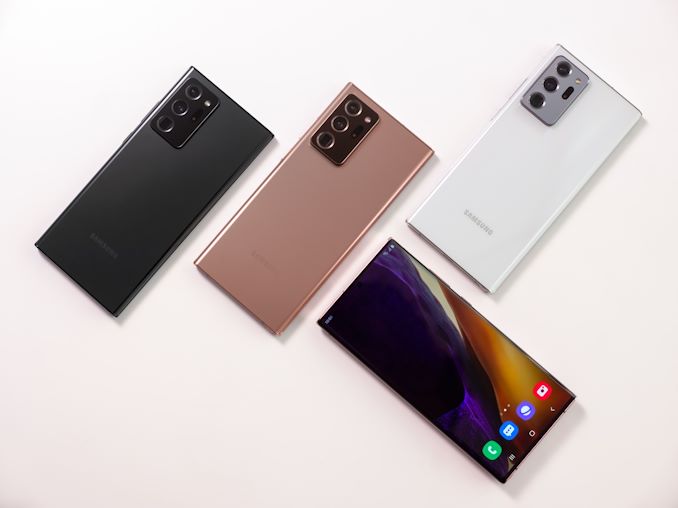 The Note20 Ultra adopts the same 108MP 0.8µm f/1.8 camera sensor as on the S20 Ultra, but one addition here is that Samsung is adding in a laser autofocus module to augment and solve some of the issues this sensor has had in the S20 Ultra due to its lack of DP-PDAF.

Another big change the Note20 Ultra makes is the abandonment of the 48MP sensor in its zoom periscope module. This has now been replaced with a 12MP 1.0µm sensor which is much smaller in size. The optics here have grown from a 4x to a 5x optical magnification, and the aperture is bigger at f/3.0 compared to the f/3.5 unit on the S20 Ultra. Generally, the main advantage of this change is that Samsung probably saved a lot of space internally as the new module should be much smaller in size, maybe why they were able to reduce the camera bump footprint. Secondly, it allows for simplified, and maybe higher quality optics. Their advertising has also ditched the failed 100x zoom label on the camera housing – and the phone only magnifies to up to 50x now.